There are insects hidden in plain sight on this hackberry. 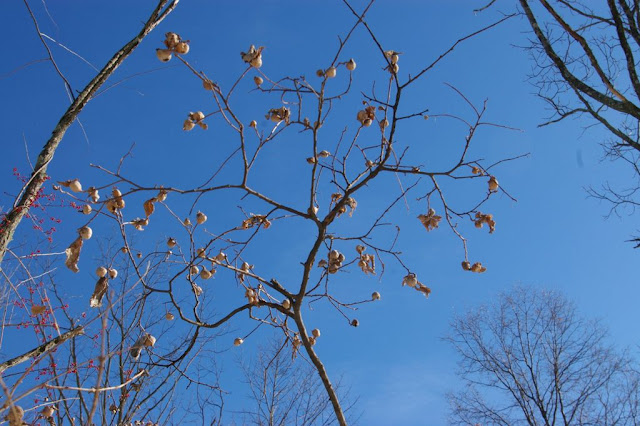 These insects are overwintering inside the hackberry petiole galls.
As I drive down the road and notice the hackberry trees covered with galls, I like to think of them as a chain of hotels called "Hackberry Haven Hotels"﻿.  The reason I call them hotels is because the galls contain numerous compartments. I have found up to six nymphs spending the winter inside a gall, each in their own white wax-lined "room". 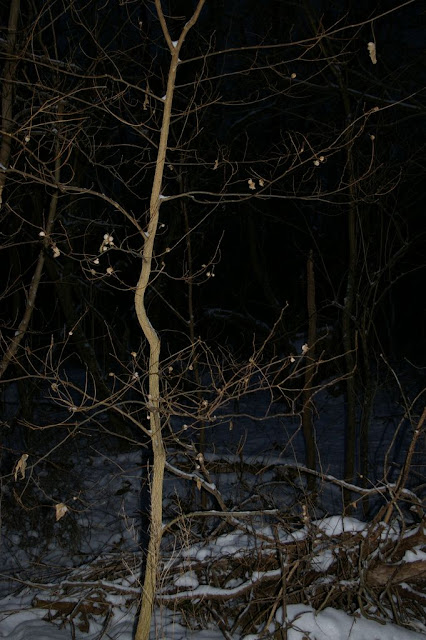 In this picture you can see some of those galls on a hackberry that is growing at the edge of the woods behind the wood pile at a place we call, "the Landing﻿﻿".
In order to make the Hackberry and its galls less inconspicuous and make it stand out from the brush, I used a camera flash in the dark.  Similarly, the hackberry gall psyllids are rather inconspicuous but there are four outstanding things about them that I would like to spotlight.
﻿
﻿    First, the hackberry petiole gall is caused by an insect named Pachypsylla venusta. In other words, the gall insect has information encoded in its DNA that gives it the ability to induce the tree to grow the gall.  The gall provides a food source and a sheltered home for the developing nymphs.
﻿    The second thing that is worth noting is how the psyillid manages to live on the nutrient-poor tree sap. To round out its diet, the psyllid has a symbiotic relationship with endosymbiotic bacteria. The psyllid's DNA has a "computer program" that grows a specially designed structure called a bacteriome where its symbiotic bacteria live.

The third item of note is the nymphs overwintering ability. When I opened up a gall one very cold winter day (near 0 F.) the nymphs were squishy(unfrozen) and in minutes were walking around.  I'm guessing the nymphs avoid freezing by producing their own antifreeze.  That's super cool.

I took the photo above by attaching my DSLR to my microscope which is similar to this one.

This a first for me, so stand by for more microphotography! ﻿
The fourth thing I'll spotlight is that the gall psyllid nymphs have an almost microscopic hole-saw that they use to cut escape holes out of their woody galls. They saw the holes by "wagging their tail".  The very first psyllid must have come with DNA instructions for forming teeth on the tip of its abdomen, otherwise it could not have gotten out of its gall, thus turning its gall home into a wax-lined coffin. 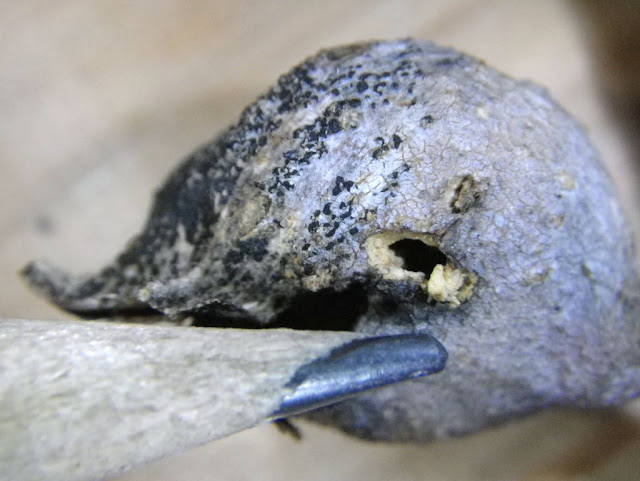 The escape hole with a pencil tip for scale.

So, after all that gall growing, symbiotic sap sucking, waiting out the winter, and tail wagging, look at what shows up in the spring to start the process all over again.
The adult hackberry petiole gall psyllid, which looks like a very tiny cicada.
The Creator that wrote those DNA instructions packed some amazing abilities into that tiny creature.
I'm impressed.
There is more going on at Hackberry Haven Hotel than meets the eye.