Ants farm Black Locust Treehopper (Vanduzea arquata) nymphs on a Black Locust tree in my backyard. Ants farm the treehopper nymphs by herding and protecting them.  The ant's reward for tending the treehoppers is the honeydew secreted by nymphs.  Here are some photos and a video of the ants the "milking" the nymphs. 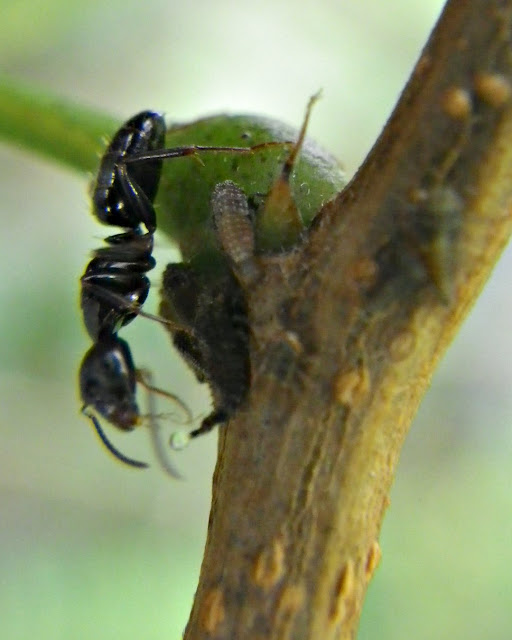 In both of these photos you can see the honeydew droplet secreted by the treehopper nymph.
In this video you can see the ants stroking the treehopper nymphs with their antennae and the nymphs responding by secreting a droplet of honeydew which is immediately taken up by the ant.  In other words, this video contains much antennae waving and some droplets of honeydew appearing and disappearing. The background noise is the buzzing of cicadas.
The tiny nymphs suck plant juices and honeydew is a sugary waste product.
The photo below shows a late instar of the treehopper. 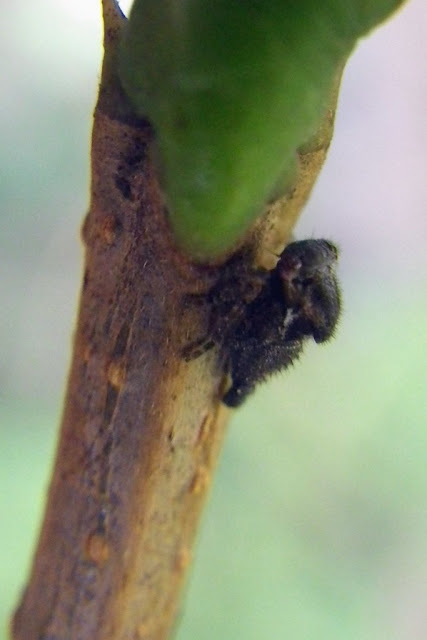 Here is a picture of an adult Black Locust Treehopper.
The adult treehoppers are also tended by ants.
﻿

Just for the fun of it, here is a photo of another species of treehopper found on the same young Black Locust in my backyard..  This is the Locust Treehopper (Thelia bimaculata) which mimic thorns on the Locust trees.
﻿