Our rivers and streams are still warm enough for swimming.  Of course, for our family that involves snorkeling and observing the aquatic life otherwise hidden by the glare of the river's surface. 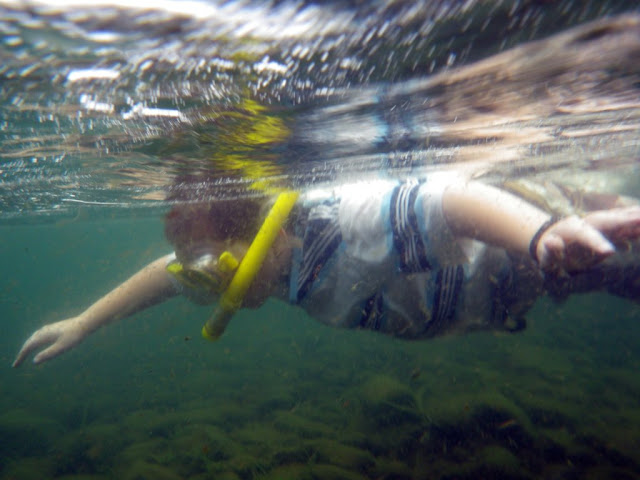 Snorkeling is a great way to visit the underwater world.
An interesting inhabitant of our rivers is the freshwater mussel. These filter-feeders are found partially buried on the bottom, anchored to the substrate with their muscular foot.
In the photo below, we are looking at the business end of a live mussel as it feeds on fine particulate organic matter (FPOM) it filters from the constant water supply the river brings past.
I took this picture looking directly into a mussel's inhalent siphon.  The opening farther up is the exhalent siphon.  A mussel pumps water through its body by cilia created currents.  The current passes through the gills which act as a sieve.  On the gills, zooplankton, phytoplankton, algae, and other nourishing organic particles (detritus) are filtered from the water.  Strands of mucus also help capture and transport the filtered particles. The particles are then conveyed by cilia action to the mouth and stomach.  Along the way on this cilia conveyor belt some sorting goes on and the larger particles, like sand, are "ditched".

Here is a snorkeler's view of a mussel in its natural position. 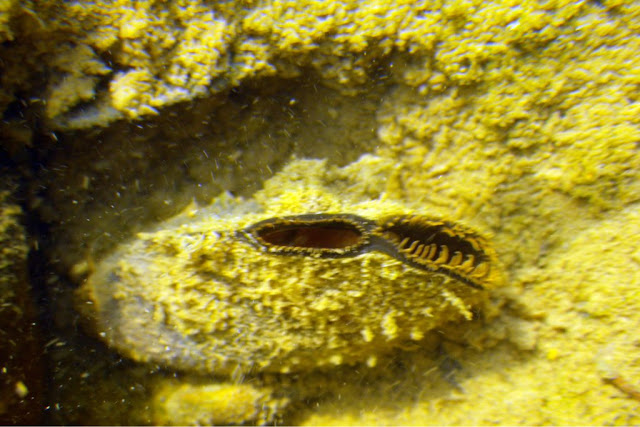 Incidentally, I had to be careful to not cast a shadow over the mussel.  A sudden shadow or other disturbance would cause it to close up its shell.
In this photo, notice the detritus entrained in the inhalent and exhalent currents… 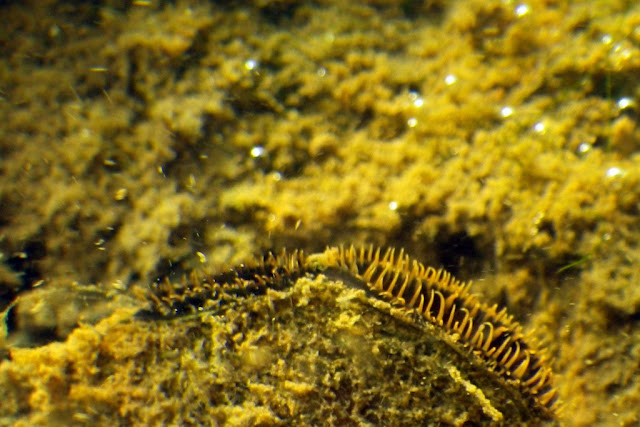 giving an indication of their direction.  ”In” is from the right...”Out” is to the top left.
I'm impressed with the mussel.  I’m impressed with its current pumping system and its cilia powered, mucus facilitated, detritus sorting and conveyance system.  There is a lot more going on in the river though.  For instance, covering the mussel's shell is a microscopic world of periphyton that is no less amazing than the mussel itself.
The underwater world is worth seeing for yourself, but hurry! The water will soon be too cold to comfortably lay there between the two worlds observing aquatic life, while the minnows tickle your toes.  Be sure and take an underwater digital camera along.  My "take everywhere (even underwater) just-in-case camera" is a Pentax Optio WG-1