Dozens Of Chalcid Wasps But No Butterfly

Chalcid wasps beat me to this Variegated Butterfly chrysalis.  Of course, I didn't know that at the time we found the chrysalis.
Recently, some kids came running up to me and said, "Hey, we found a really cool butterfly chrysalis that has gold-colored spikes!"  I'm glad I have extra pairs of eyes watching for cool stuff for me.
﻿﻿The chrysalis was hanging in a piece of plastic playground equipment.  I plucked the chrysalis to hatch out at home... who minds another Variegated Fritillary flitting around?
Well, this is what hatched out today (actually more like two dozen of them) instead of a butterfly.
﻿   The tiny wasps that hatched for me today are called chalcidoid wasps.  These tiny parasitic wasps obviously parasitzed the butterfly pupa, leaving it just a pretty, but hollow, shell.  Here is a photo of their exit hole.﻿﻿
﻿Now, not having a butterfly hatch from the chrysalis was a bit disappointing, but not with dozens of tiny wasps to observe and photograph.
There is a story that goes along with my discovery of the chalcid hatch.
I was sitting at my desk when I felt a slight sting, or prick, on my arm.  When I looked at the spot, I saw a black speck.  I touched it with my finger and the speck climbed on.  With the realization that the speck was an insect, I reached for my hand lens to examine it closer, but it leaped away like a flea.  So, for awhile I was pondering how I came to be flea-ridden.  Later I noticed, to my surprise and relief, that there were dozens of the same jumping specks on the container with the butterfly chrysalis.
There are many species of chalcid wasps, so I won't try to id these.  Instead, I'll spend my time with the wasps, taxing my cameras resolution and improving my photography techniques.
Moreover, I can gaze at these tiny wasp pictures and mull over how these parasitoids left me with the empty shell of a butterfly chrysalis.  I am thoroughly intrigued with their life cycle. I could ask many questions. For instance, "How do they locate their prey?"
Here is a picture of a wasp on a pencil tip to emphasize the minuteness of these chalcids.  The point is, they are tiny, they are everywhere, and they do amazing things. 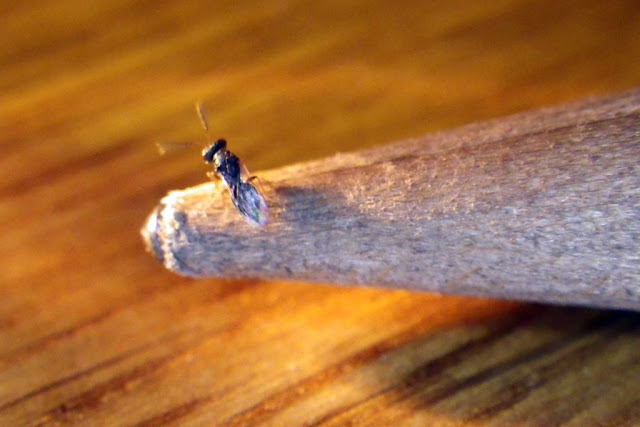 Oh, I released some of these parasitic wasps.
I believe they went hunting.... 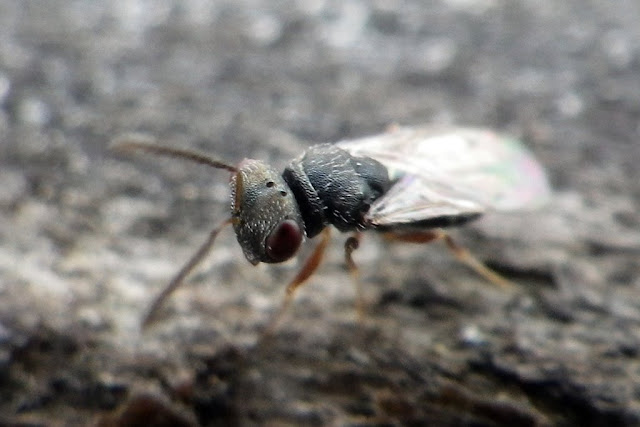 Pupa...chrysalis...egg...caterpillar.......the chalcids are coming!
Which side are you on?  The hunters, or the hunted?