What is this white fluffy flying thing?
A flying fairy?   An eeny-weeny beeny ghost?   A drifting angel? 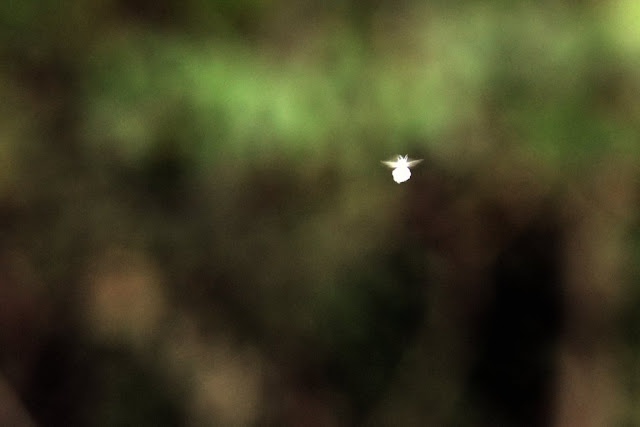 No, it's definitely not an angel; it's an aphid. A woolly aphid.
I saw this tiny white fuzzy bug flying along the edge of a fence row. Even though it looked like a piece of fuzz or lint drifting past, I gave chase because I've seen these white fuzzy insects flying before, and knew how cool they were.  Also, I happened to have my Nikon

and zoom lens with me this time, and the thought struck me, " Could I get a picture of an aphid as it was flying?"  Well, yes, but I was always chasing it and didn't get a side shot to show some motion.
Anyway, then ﻿I caught the woolly aphid and let it climb up my finger where I could hold it in the sun for a photo.  Incidentally, I took the close-up picture of the aphid (below) with a Pentax Optio

that I had in my pocket for just such an occasion.
Woolly aphids secrete waxy filaments that give them the fluffy look.  The fluff may afford them some protection from predators that would rather avoid mouthfuls of wax.  Woolly aphids suck plant juices.  They can be found on various host plants depending on the species of aphid.
Here is a link for some more information on woolly aphids. 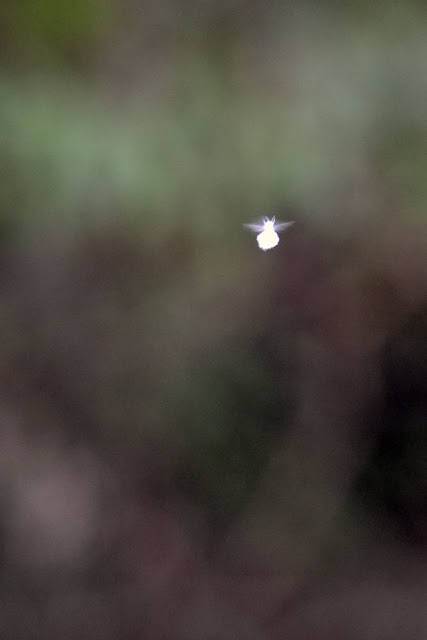 So, if you see a fluffy flying fuzz-ball, perhaps you could chase it down for a close look at its white wispy wax wig.
Here is a link to another Nature Post with pictures of these fluffy flying white bugs.
By the way, an aphid enemy also does the white wax filament thing.  See my post on the
Ladybird Beetle larvae and its bizarre wax wig.
Oh, and the line,
"eeny weeny beeny ghost... that rose up in the air" is from a cd of a great storyteller, Bill Harley.
Posted by Dana at 10/12/2011