What do earthworms eat?

or, Homeschoolers on The Case of the Missing Face.
When I saw some leaves disappearing down an earthworm midden, I was inspired to do a hands-on homeschool science project on earthworms for the kids. I called it, "The Case of the Missing Face".  I thought it would be a good way to illustrate the answer to the question, "What do earthworms eat?"
I thought this little science experiment would help the kids remember some earthworm facts and I would be able to get some interesting earthworm pictures in the process. 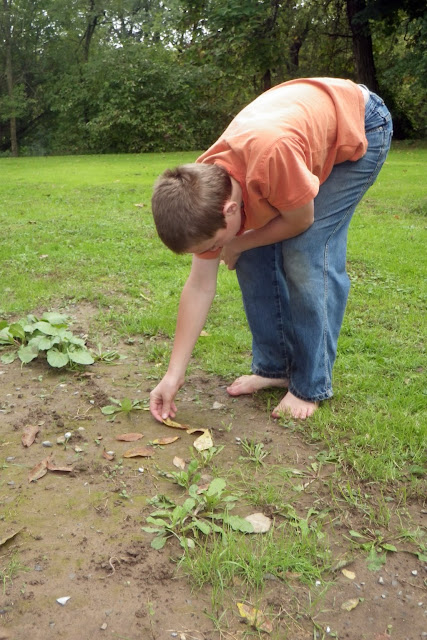 We laid a "trap" to catch the culprit who was disappearing the leaves in our yard  by placing a leaf face on the ground one evening.  The next morning most of the leaves had been pulled to surrounding earthworm middens.
They were obviously placed there on purpose and not blown away by a breeze.  Some of the leaves were anchored by fresh earthworm castings.


Another night we caught the earthworms "red-handed" as they pulled some leaves of the missing face into their middens.  We also observed other earthworms harvesting various leaves and plant material. 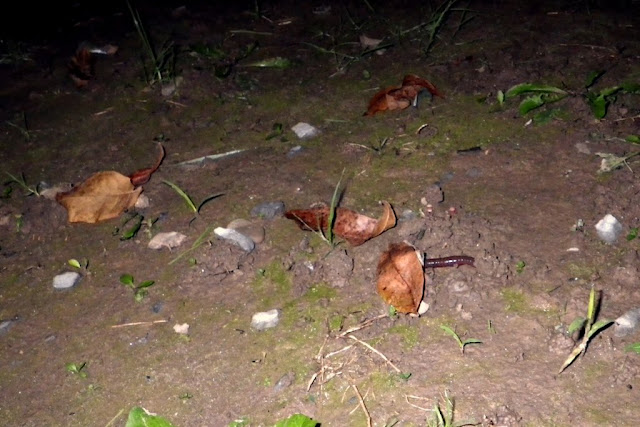 Earthworms (some people call them nightcrawlers) have vertical burrows which can be many feet deep.  On the surface above their burrows the worms construct little mounds of dirt and plant materials which are called middens. At night the worms stretch part way out of their burrows (hence the nightcrawler name) and feed on plant material. The earthworms pull some of this leaf litter back into their middens. Some of this material they use to disguise their middens , but much of it is pulled below to eat later. This habit of living deep in the soil and feeding on surface leaf litter is termed "anecic".
Another way we observed what worms eat was by peering down a wormhole. 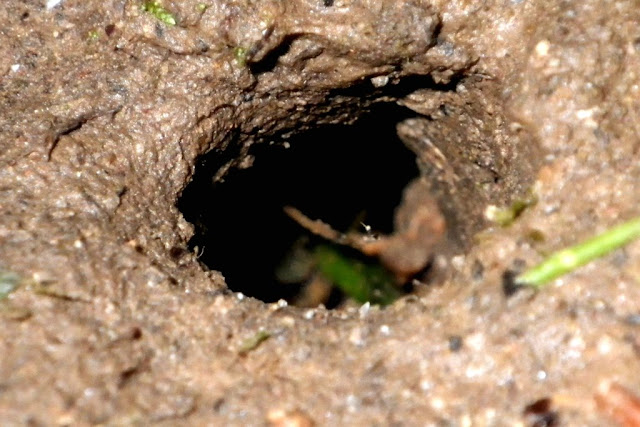 In these photos you can see some grass blades and tree leaf parts that the earthworm has pulled down into its burrow. 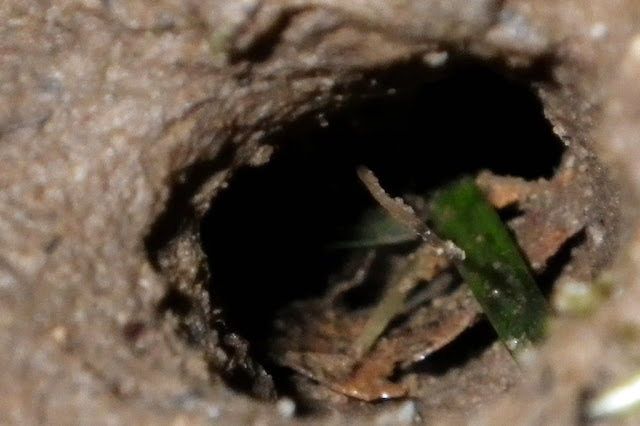 I lifted off the midden to reveal more of the worm's underground stash. 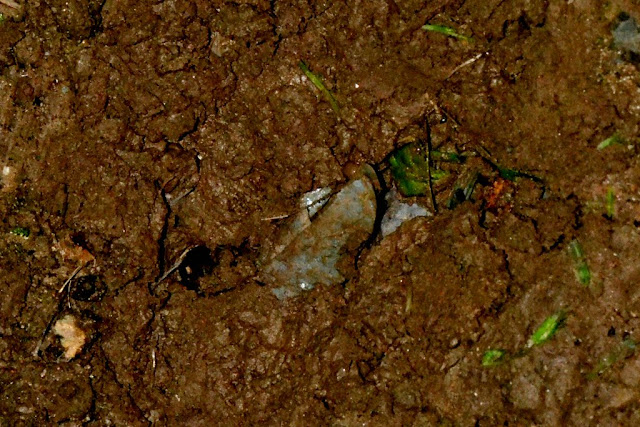 The worm's hole is on the left.  There extending to the right, in what used to be the worm's tunnel, is some of the worm's hoard...grass, sections of fresh green leaves, and a whole leaf that had fallen from a tree.  I believe that fallen leaf was once part of the "face".

I've been known to cross-section insect burrows and even Indian middens, so why not an earthworm midden?  Here is a ﻿﻿cross-sectional picture of an earthworm burrow and midden.  The midden mound at the surface has some leaves positioned there by the worm for some reason.  The worm's tunnel extends down the center of the picture and continues to an unknown depth.
﻿﻿  I placed a piece of glass against the cross-sectioned worm tunnel to provide a window into the activities of the tunnel.  I wasn't counting on the rain splattering up the window, but the worm is still visible as it forages partially out of its burrow.  Some leaf litter that has been pulled down into the burrow is also visible in the picture below. 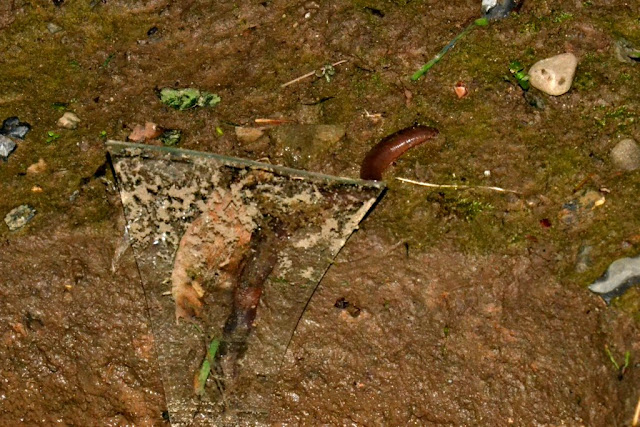 I took these earthworm pictures at night when they were out feeding.  Taking a picture of a worm at night is a bit difficult.  I had to hold the flashlight, manually focus the camera, and snap the pictures... all without scaring the worms back into their burrows by wiggling the light too much. Therefore these pictures aren't the greatest, but hey, they will suffice to share some information on earthworms.
﻿   In the photo below, the earthworm is stretched out of its burrow and is pulling a leaf.  The leaf slowly gliding across the yard caught my attention in time to get a snapshot.
Just before I snapped the earthworm picture below, the worm was stretched over to the upper left side of the picture and was pulling hard on a Common Plantain leaf.  The leaf tore, and the leaf and worm sprang back to their respective corners right as I took the photo.  The plantain leaf that is pointed toward the worm is blurred because of the motion left over from jerking away from the worm.  Notice the worm retains its hold on a fragment of the leaf. 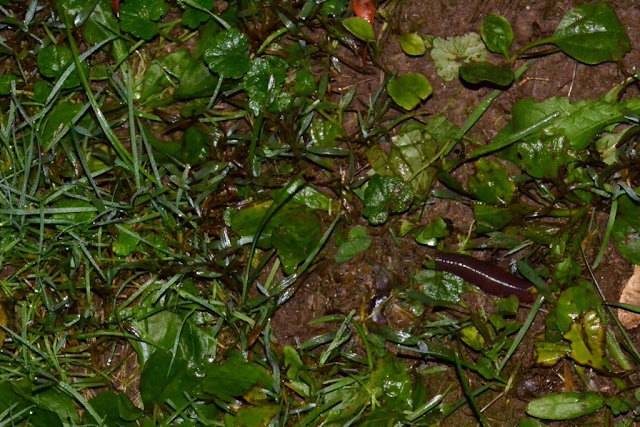 In the picture below, the earthworm was working at dragging the yellow leaf to its burrow.
I guess you could say, "Something is raking my yard for me".
The photo shows why leaf faces disappear, and why soon this leaf won't be blowin' in the wind
﻿  We've seen some strange things when playing a soft flashlight beam low over the yard...
a blade of grass wiggles...
a  fallen leaf glides a bit, then stands on end...
over there a plantain leaf suddenly jerks upright.
The word for this slow, almost invisible process happening beneath our feet isn't exactly "creepy" nor is it "dramatic".
This nightcrawler phenomenon is "deep" and "moving", so perhaps the word is..."profound". 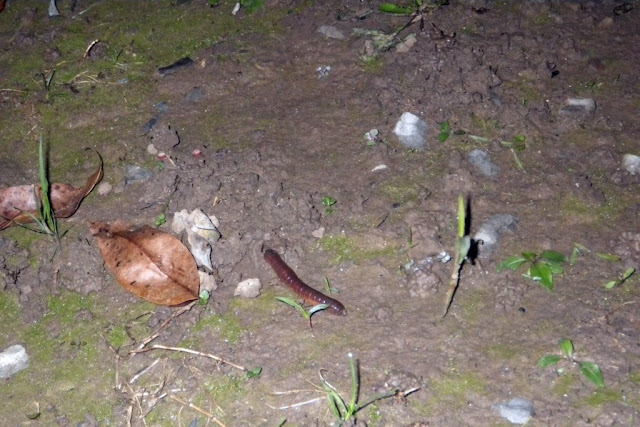 Why not put your own leaf "face" right down there on the ground beside an earthworm midden.  There is a good chance it will disappear.  That's a good way to demonstrate some earthworm facts, like, on a dark night ....things are going down... leaves suddenly tear....and even grass blades disappear.
Posted by Dana at 10/22/2011