A violet drama is about to take place.
In the picture below,  a violet seed dispersion event is imminent.
Violets have an interesting, somewhat dramatic method of seed dispersal by explosion.  This ballistic seed dispersal mechanism begins innocently enough with the seed pods opening to the position in the picture above.  Those pods look like they are just holding a bunch of little BB's. Then suddenly, a random barrage begins with a seed being shot out now and then.  The seed launches are even accompanied by the stalk slightly recoiling.
A good way to experience the seed launches and the recoil, is to hold some open seed pods by their stems.  You can feel the "kick" when the shots are fired.  Another good way to visually experience a seed dispersal explosion is to prop a few seed pods in a natural position on a table top and place a clear plastic cup over them.  This way when the seeds are fired you can see the stalks recoil and hear the seeds ricocheting around in the cup.
Here are some before and after pictures of the violet seeds dispersal.
The barrage has begun..........                          .........fifteen minutes later. 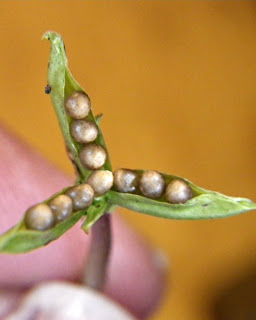 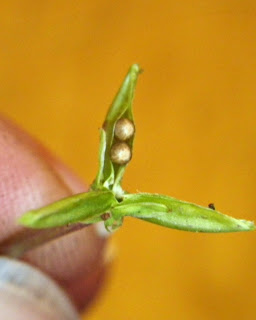 Violet's explosive seed dispersal method is driven by a turgor mechanism (see the collapsing pod just beyond the outer seeds?)...the seed pods dry out and this creates pressure along the sides, squeezing the seeds until one pops out.... much like pinching a watermelon seed or cherry pit until it shoots away.
In the photo below, a fresh seed launcher is growing up (on the far left) to take the place of a spent launch pad (to the right). 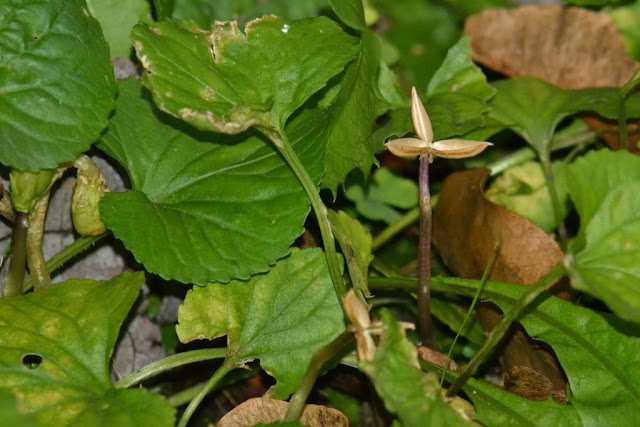 Another noteworthy seed dispersal strategy of violet species is myrmecochory - seed dispersal by ants.  The seeds have some ant bait attached (elaiosomes) to their exterior. The ants are lured into violet seed distribution as they gather the seeds for their little reward.  After collecting the seeds and consuming the reward, the ants discard the seeds... a neat way of having your seeds transported and planted, eh?   Some other plants that employ this strategy are the Trout Lily and Round-lobed Hepatica.
Violets flower mostly in the spring and occasionally in the fall.  During the summer and fall, violets have other secret flowers that never open but continue the work of producing seeds.  These self-fertilized flowers are called cleistogamous flowers.  These flowers aren't pretty like the spring ones, rather they look much like the seed pods. Another plant that produces cleistogamous flowers are the Gaywings.
Here is a photo of a pretty violet flower in the spring....
...and here is a photo of violets growing along a wall.
The violets are still producing flowers this fall (the non-opening kind) in order to continue to participate in their seed distribution campaign. 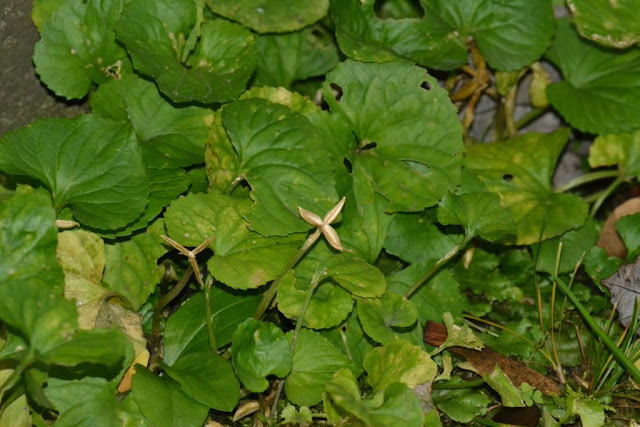 Violets are an easy but captivating example of seed dispersal for kids to observe....
...natural plant seed dispersal with a "kick" and a "trick".
Here is a post about the explosive seed dispersal of Jewelweed seeds.
Posted by Dana at 10/31/2011