I smelled this stinkhorn while walkin' trail is south eastern Ohio last weekend.  This peculiar-looking mushroom's odor was obnoxious.
However, stinkhorns are very attractive....to flies.
When I approached  the stinkhorn to take the picture, I crashed a fly party...the mushroom's head was literally covered with flies.  Most of the flies fled, but a few stuck around for the photo.
The foul-smelling fungus is very effective at attracting flies by mimicking the odors of carrion.  In the photo above, the mushroom's pitted, white head is coated with an olive-colored, stinky slime.  The flies have eaten away some of this smelly goo and exposed the pitted mushroom head in a couple of areas.
As the flies consume the slimy coating on the head, they are ingesting spores, also spores are sticking to their feet.  In this way, the fungal spores are transported to new locations.  What an intriguing passive spore dispersal system. 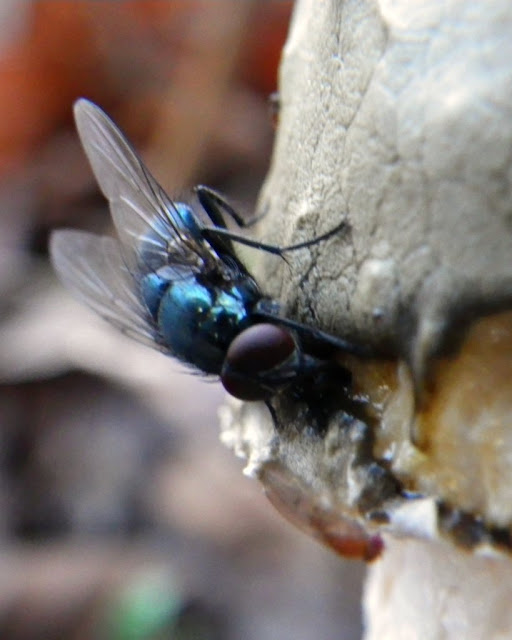 Feed the flies and catch a ride.
Better yet...
Stink to the sky  'n ride a fly. 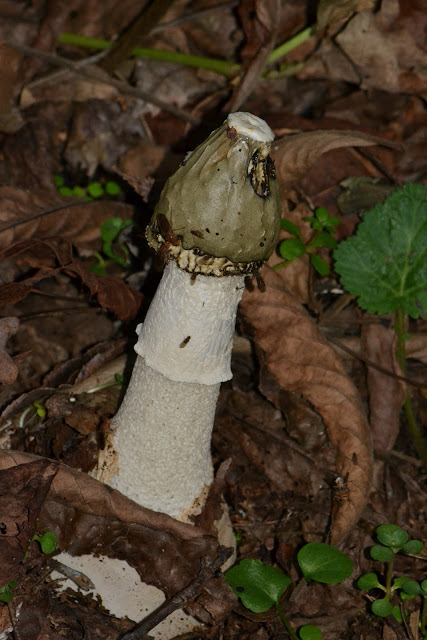 Stinkhorn mushrooms "erupt" out of an "egg".  In the photo above, the "egg" is visible as the swelling at the base of the mushroom.  I didn't see other eggs nearby, but perhaps there are some hidden in the leaf litter that might pop up shortly.
Since I'm on the subject of stinkhorns, I was walkin' trail earlier this summer in the Washington, D.C area and noticed another kind of stinkhorn, the Dog Stinkhorn.
I wonder what the purpose is for the hole at the tip of these stinkhorns?  I'll venture a guess that it has to do with emitting some of the volatiles. 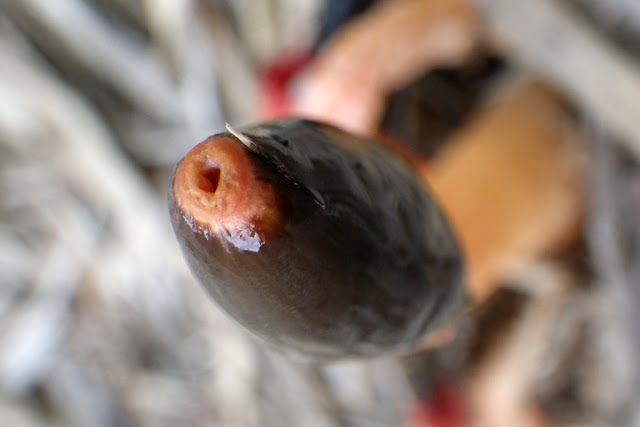 Anyway, back to the flies....
up the trail a bit was one of the stinkhorn's party-going flies which I had inadvertently scattered. 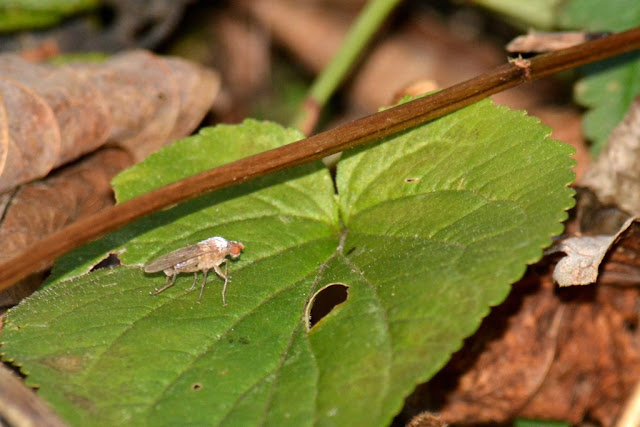 This fly was walking around on a leaf....so naturally I'm thinking about the fly's slime-tainted footprints and its spore-laden gut contents.
Where might it tread next...my shoo-fly pie?
Here is a link to a time-lapse video of a growing stinkhorn  and its busy flies.
Posted by Dana at 11/19/2011