A Wintermoth Encounter On A Lonely Mountain

I miss the moths...the butterflies...the insects in general (I don't miss the mosquitoes).  Most of them have settled in for a long winter's slumber, or have passed on.  Wintermoths are an exception.  The wintermoths will fly on mild days in late fall, winter, and early spring.  These moths aren't all that pretty, but they are hardy and unusual. Oh, and they have a "sweet tooth" - they like to sip sap.
My truck headlights illuminated quite a few moths flying last night as I drove down a rough, dirt, mountain﻿﻿ road - way out in the bush.   Flying insects are a bit unusual for late November in northern Pennsylvania.  I noticed one moth flying along the side of the road, so I stopped to take its picture.  The moth landed in a knee-high brier bush.  I believe this November moth was a Citrine Sallow - Pyreferra citrombra - one of the wintermoth tribe.
There are, of course, a few other insects out-and-about this time of year.  Some of them were in the same brier bush as the moth.  I noticed two bonus insects in the picture...after I was at home. I majorly cropped the photo to make them more apparent. 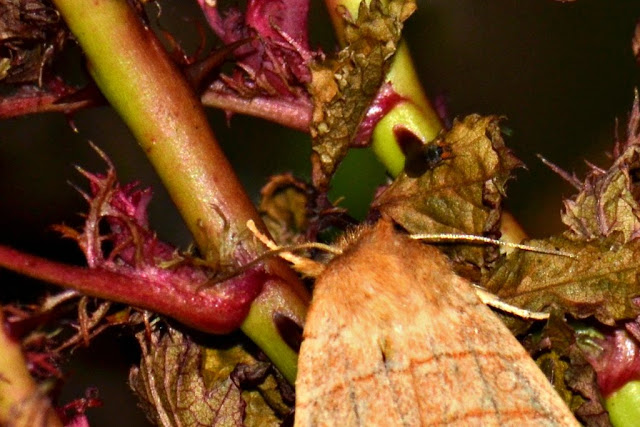 One - some kind of fly - was on the leaf near the moth's right antenna. 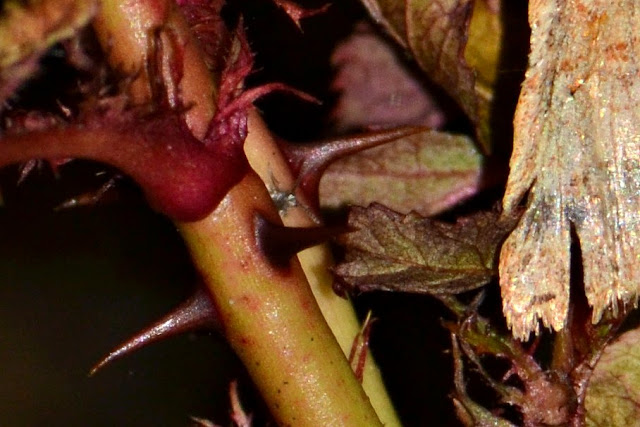 The other was between the two thorny branches to the left of the moth's wing. 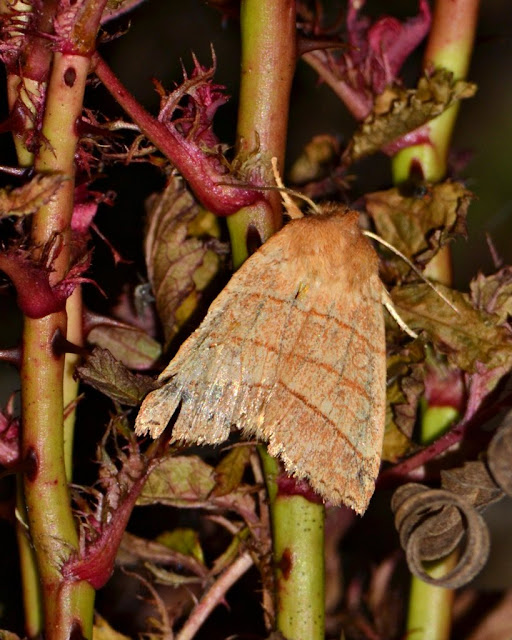 I reckon there was something in the brier bush that was very attractive.  Why else would there be a wintermoth, a couple of insects, and my camera in a little brier bush along a dark, lonely, mountain road in late November?   Too bad I didn't spot the extras until after the fact....I may not have hurried on so soon.
I wonder...what was in all the other brier bushes I passed?
Posted by Dana at 11/21/2011