This hemlock is an unusual tree...standing on it's tiptoes.
This hemlock looks like it has high-waters...perhaps it doesn't like snow, or bugs.
Maybe it's a foot-loose tree and is out for a stroll... a wanderer...a stray...a drifter.
Better yet, maybe Cherry Tree Joe passed through here once...
Once, as the story goes...Cherry Tree Joe "was racing rafts with his friend, Bob McKeage, down Clearfield Creek, and it looked as if Bob might get ahead. Joe reached out and pulled up a hundred-foot white pine by the roots and stuck it in the channel in front of Bob's raft. That ended the race as far as Bob was concerned, but he never held any grudge over it, and the two are buried within a few feet of one another in a cemetery high on a hill above Cherry Tree."

Legend and fancy aside, it's easy to see that long ago this hemlock sprouted on top of an old stump.  The rotting remnants of its predecessor are still partially visible. 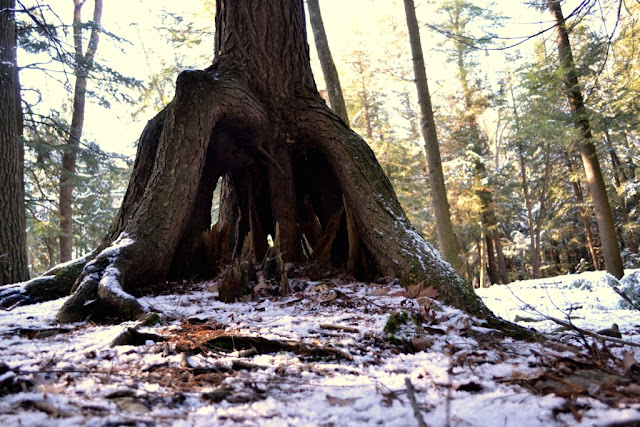 So is the ghost of the stump...the hemlock's roots outline it nicely. 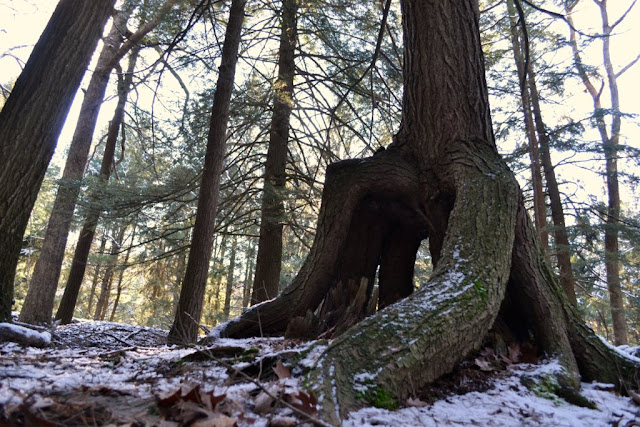 Incidentally, I think the tree sprouted "on", not, "from" the old stump. I don't think conifers sprout from cut stumps like some other trees do.
I can picture a red squirrel sitting on that stump in the background, toward the left, in the photo below.  The Red Squirrel is shucking hemlock cones, but happens to drop a choice seed (maybe Cherry Tree Joe will saunter by and frighten it). 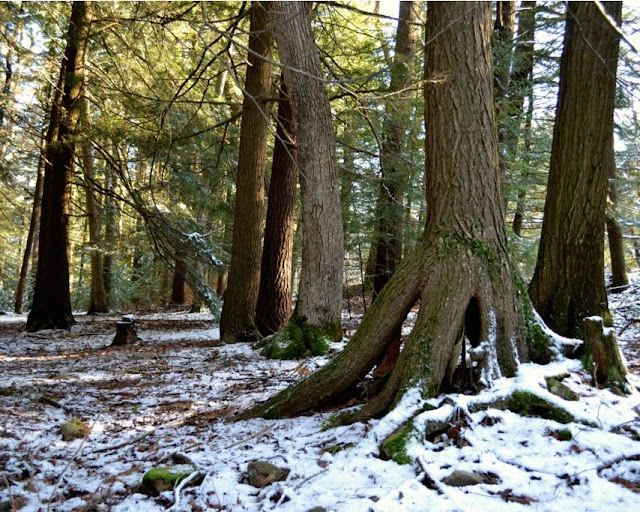 If that seed lies hidden among some moss on the stump, and sprouts, and grows unusual roots...who knows?  If you took the same picture fifty years from now, our hemlock might look like it was a drifter after all.
Posted by Dana at 12/19/2011