Witch Hazel bushes, also known as Winterbloom, are especially noticeable this time of year because of their unusual yellow flowers.﻿
Witch Hazel (Hamamelis virginiana) is a peculiarly interesting bush the whole year long. In the summer there are several galls and some interesting insects associated with the shrub.  Now, in the late fall/early winter, the scraggly flowers (when there are few other flowers blooming) and the double-barrel seed shooters are prominent.  Most of the year, the spiny galls and the seed pods are visible as reminders of the peculiarities of this plant.
﻿﻿﻿﻿I recently spotted a Spiny Witch Hazel Gall among some Witch Hazel flowers. 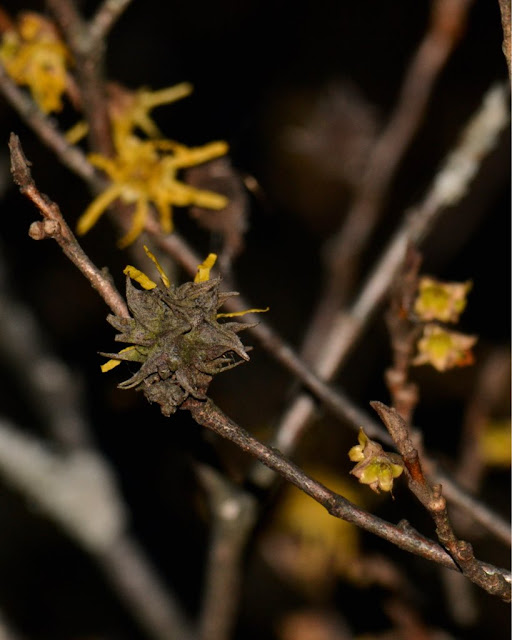 Last summer I took this photo of some Spiny Witch Hazel Galls along with a leaf rolled by a leaf-roller caterpillar into a nifty leaf-shelter.
﻿ ﻿﻿Here is a photo of a Spiny Witch Hazel Gall that I took last winter.
﻿  ﻿﻿These strange, spiny galls are caused by the Spiny Witch Hazel Bud Gall Aphid, Hamamelistes spinosus.
All year long the spiny galls remind me of the aphid's amazing and complex two-year life-cycle which involves living on birch leaves part of the time and some of the time on Witch Hazel. Here is a link to an overview of the aphid's life-cycle.
Sometimes alongside the galls are the seed pods of the Witch Hazel.  They are similar in size and shape... minus the spines.  Witch Hazel uses an explosive seed dispersal method.  The seed pods act as double-barrel cannons.  In the late fall/early winter the seeds begin to dry out and open slightly.  As the seeds continue to dry and contract, pressure is exerted on the seeds until, pow, the seeds are shot a considerable distance. 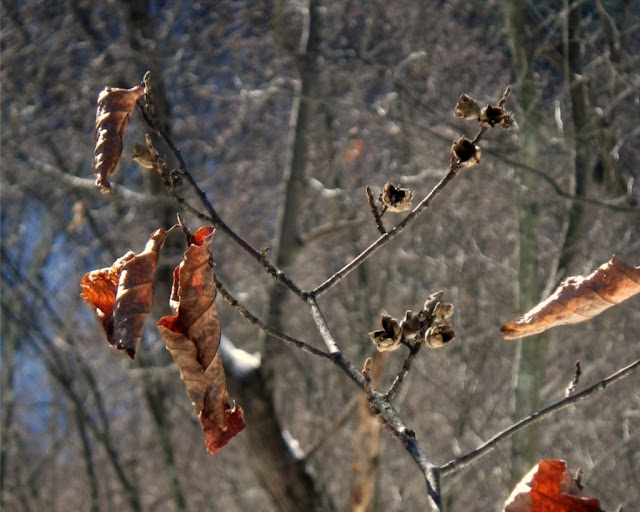 Here's lookin' down the barrel of a loaded double-barrel Witch Hazel seed cannon.

The glare at the bottom of this photo is from the sky reflecting off of a creek.
In all three of these seed pod pictures, notice how all of the seed pods are held at a skyward angle to maximize each seed projectile's trajectory. 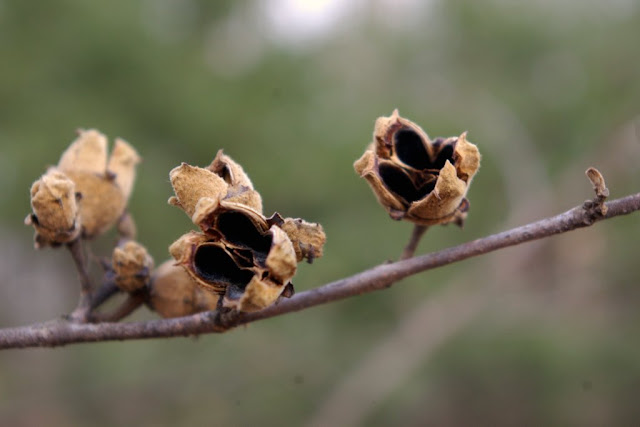 These seed pods are shot, but they are still cool to see.
Another noteworthy sight (and one of the many things I hope to post about) on the Witch Hazel bush, is the Witch Hazel Cone Gall, or Witches Cap Gall, caused by an aphid, Hormaphis hamamelidis.
﻿These pointy cap-like galls are just another reason to take notice of the trail-side Witch Hazel bush. 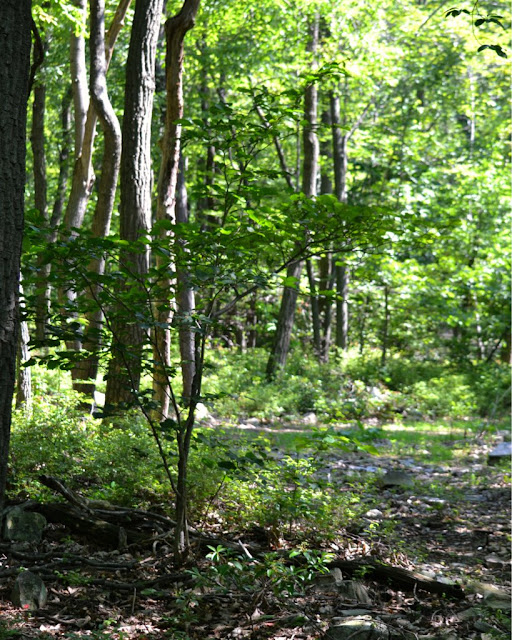 What other shrub will remind you of two-timing, sap-suckers living in spiny houses alongside double-barreled seed launchers...not to mention Witches Cap galls, blotch leaf mines and leaf-shelters?

A Witch Hazel bush is well worth appreciating anytime of the year.
Posted by Dana at 12/17/2011