"Sphagnum moss is cool!"  That's a quote from my daughter, who just now, looked over my shoulder and saw I had typed the words Sphagnum moss.  Now that's what I like to hear!   Especially since today is a typical, dreary, mid-winter day and we haven't talked about Sphagnum moss for months (I don't think I ever showed my kids the video of the Sphagnum's spore cannons firing).  I reckon my kids were impressed with this miraculous moss back in June and July when we were looking for orchids in the bogs.  Over the years, I have pointed out to them at least three amazing facts about sphagnum moss, so just now I showed the children this picture from 2010... 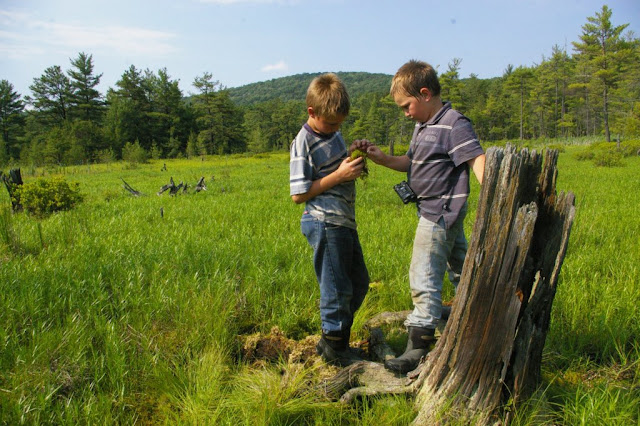 .... and gave them an impromptu quiz
"What are you looking at in this picture?"   They answered, "Sphagnum moss and its spore cannons."
"What is the bog made of ?"  They said, "Sphagnum moss, water, muck, grasses, and other things."   Oh, this is good!
What makes the bog?   "Well, the Sphagnum moss because it holds so much water and is so acidic."
Not bad!  Not bad at all...after a year and a half!
By the way, there's also a cool history lesson in that picture... can you see it?  Maybe I'll post on that next time.

Sphagnum moss makes up much of the bog you see here.  The dead moss, or peat moss, has accumulated in thick deposits over time.  The live moss on the surface is mostly hidden by the various sedges and other plants, but Sphagnum is there in the background, just like the many, many Rose Pogonia Orchids in this photo. 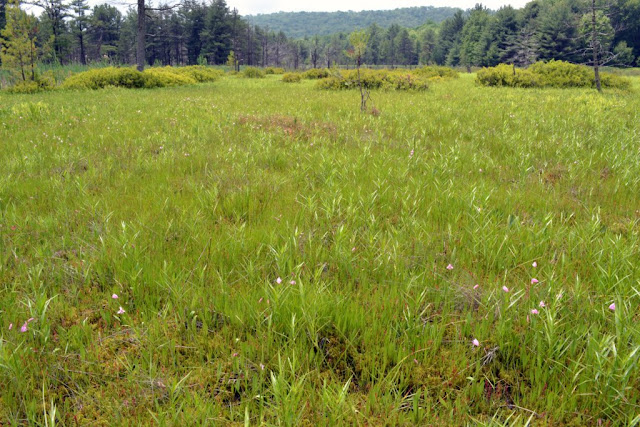 The Rose Pogonias are much more visible from down at their level.  I was kneeling in the Sphagnum and getting very wet while taking this photo.
Yes, the Sphagnum was there, but these beautiful flowers stole the show when I was posting some interesting facts about the Rose Pogonia Orchid.  The same goes for when I posted about the
carnivorous Purple Pitcher Plant  and about the pitcher plant's amazing flower.  There is a spectacular amount of sphagnum moss in these pictures... it's just "in the background" and easily overlooked. 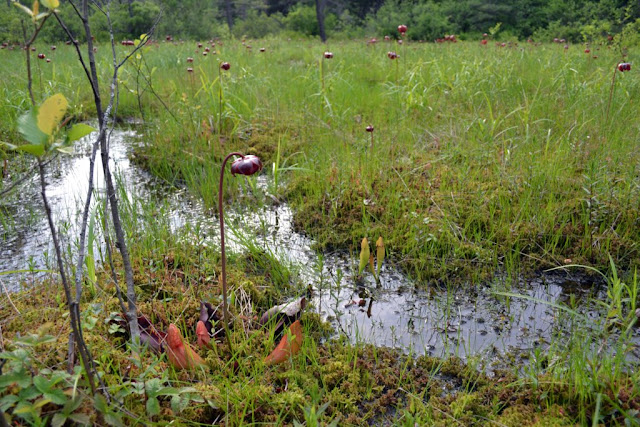 However, Sphagnum moss has an incredible, explosive spore dispersal mechanism that deserves a shout out.
The Sphagnum's spore capsule is designed to blow its top and rapidly expel its spores.  In doing so, a turbulent vortex is generated which helps loft the spores higher than a simple "poof".  This feat is accomplished as the round spore capsule dries out and collapses into a cylindrical shape which compresses the air to the point that the cap pops off.  The sudden rush of air and spores through the resulting round hole generates a "smoke ring" which carries the spores sufficiently high enough to catch a ride on more turbulent air than the light spores would be able to reach without the aide of a vortex.
Popping peat moss! 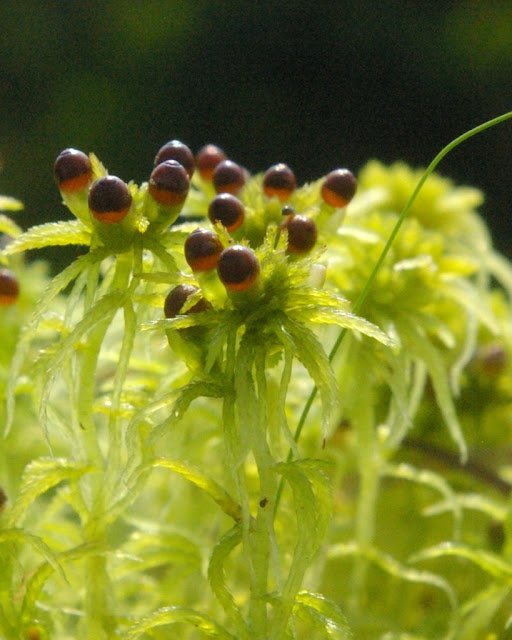 Here's a link to a video about the discovery of the fact that an exploding Sphagnum spore case generates a turbulent vortex.  The video includes footage of the spore cannons "firing".
In the photo below, the cylindrical-shaped spore capsules have already fired their spores, or are about ready to do so. 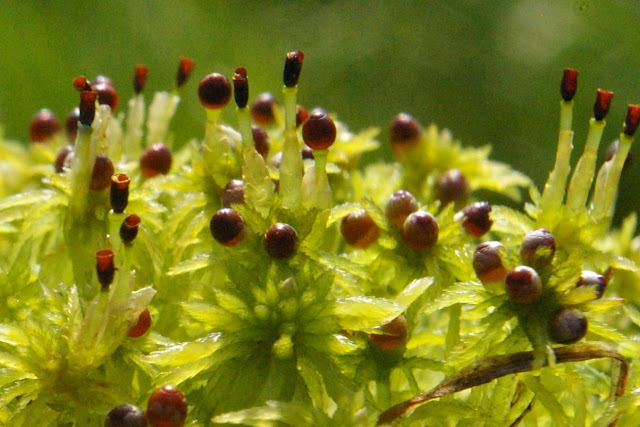 When I look over the expanse of a bog and think about all the Sphagnum moss and those many minute cannons, I can almost hear a Sphagnum cannonade.

I chose to post about the spore cannons and some of the Sphagnum's bog companions to add some "pop" and color to my mid January posts.  In the picture below, the Sphagnum moss may be inconspicuous, but knowing it's there adds some "pop" to the colorful picture of the Grass-pink Orchids.
I could quiz my children about this bog picture as well, but I guess I won't, because I'm sure they haven't forgotten those amazing bee-bopping orchids, the Grass-pink Orchids.  Also, since it's a bog photo, there is the ever-present Sphagnum moss.... of course they'll remember that.  Another reason to wait to quiz the children is because I can see a number of bog-related things in the frame of this picture that I haven't pointed out to them... yet... I guess we'll have to go on another bog slog.  Now, that is a pleasant mid-winter night's dream!
Posted by Dana at 1/18/2012