This rock outcrop on Shale Ridge has some neat fossil layers.  There are layers of fossil Tentaculites, as well as shell hash layers, that are exposed along the ridge top in outcrops like the one in the background of the picture below. 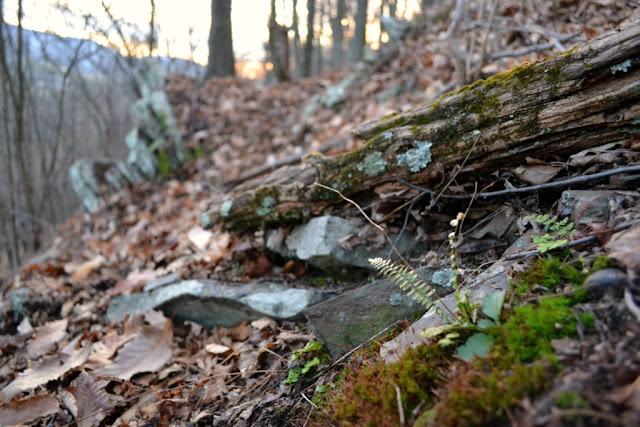 The ridge in the far left of the picture is the Tuscarora, so from the bedrock geology maps, its looks like these fossils are part of the Mahantango Formation.
﻿Here is a photo of a few of those Tentaculites.
﻿The longest one pictured is about 3/4ths of an inch long.
The small tentaculite fossil pictured below may have some of its original shell material preserved...the pen tip is for scale.

From the reading I've done, it sounds like there is some debate as to whether tentaculites should be classified as molluscks, crinoids, or something else.  They are neat looking, whatever they are.
Here is a photo of the chunk of a layer of the shell hash. 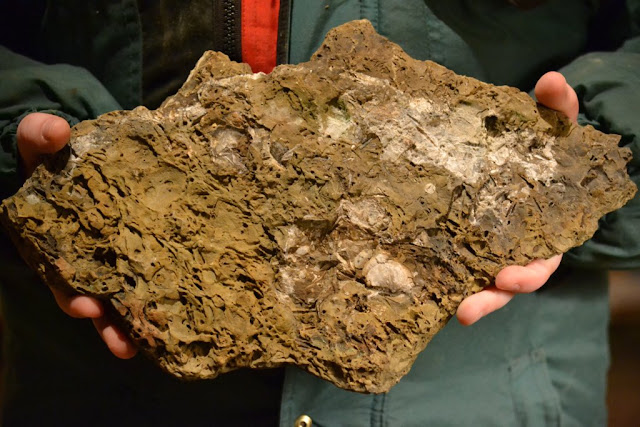 Here are some close-ups of the shell hash. 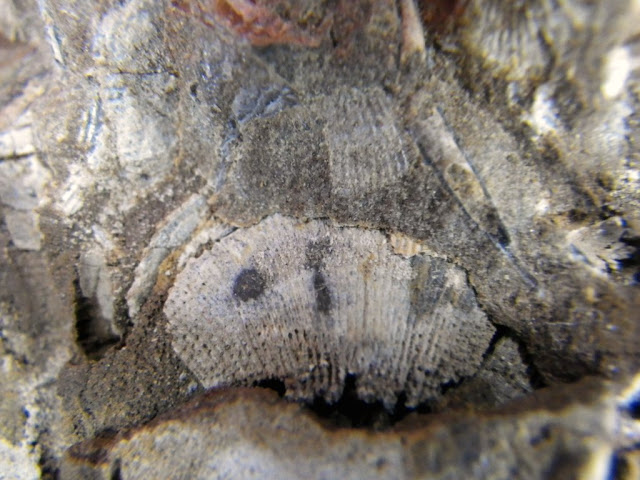 Notice that here are some tentaculites in the shell hash. 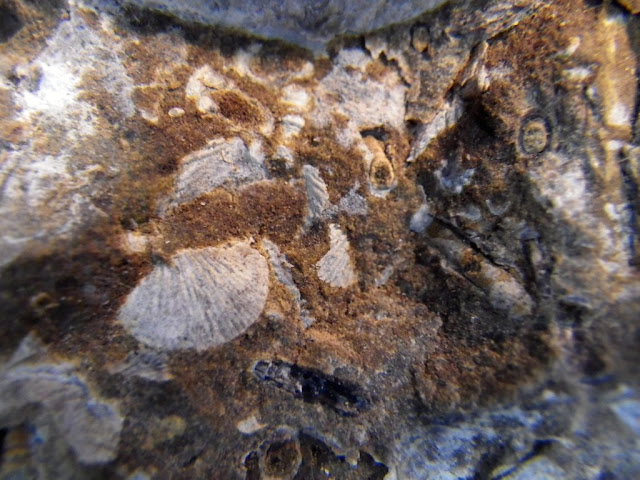 Needless to say, finding these fossils was exciting for the boys that were with me on this ramble. 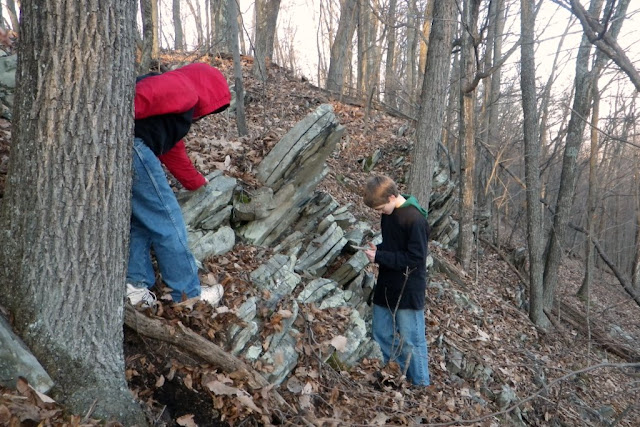 One of the boys brought me a rock and said, "There are fossils on this rock".  There were some fossils on the outside of the rock, but when I noticed the concentration of holes on the end of the rock, I could tell the boys were in for a surprise.  Those holes were a cross section of a tentaculite bed. 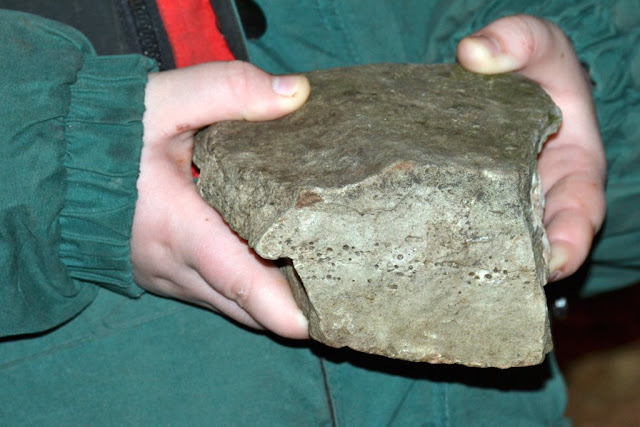 I split the rock open like a book to reveal many tentaculites. 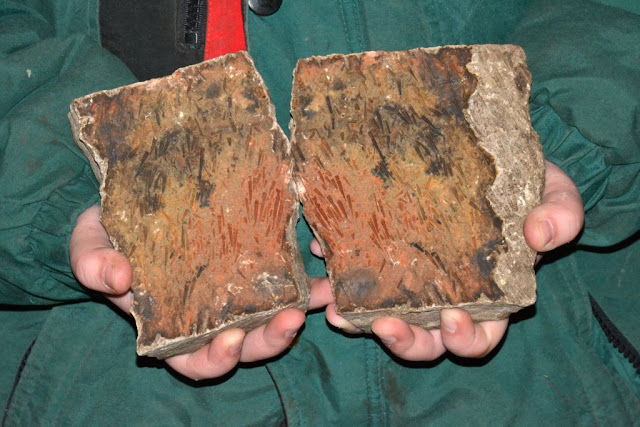 We counted over 200 Tentaculites on one face of this 4x5 inch rock. That's 10 per square inch!  How far does the tentaculite layer reach along the ridge?   How deep does it dip into the hill?  I noticed a few beds in the strata which look like they could contain fossils in this density.  That's simply a lot of tentaculites!
Here is an example of an exposed fossil bearing stratum...the lumpy rock with many small holes...three layers to the left of the Ebony Spleenwort. 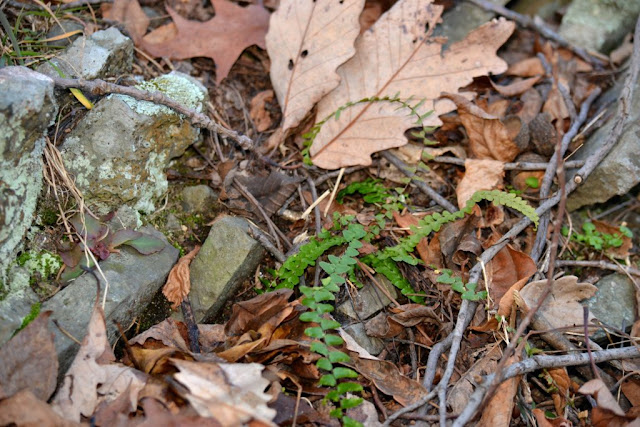 I didn't hack out any of the rock layer or split it open, like I did to the piece of float the boys found, but I expect this is what that layer would like like if I did.
Notice the orientation of the tentaculite shells.. they are mostly oriented with their apexes toward the right which is an indication that the current that deposited them was flowing from that direction.
The photo below is a closer crop and you can see that most of the tentaculites are oriented with their apexes to the right, with just a few with apexes toward the left.  Also, there are a few odd ones oriented at various angles.
Anyway, I found these fossils while looking for Ebony Spleenworts.    Those little, rock loving ferns led me to discover hordes of those tiny fossil tentaculites.  Why not ponder something bigger while we are here?  Specifically, the folds of the earth that heaved these rock layers into a nearly vertical position. 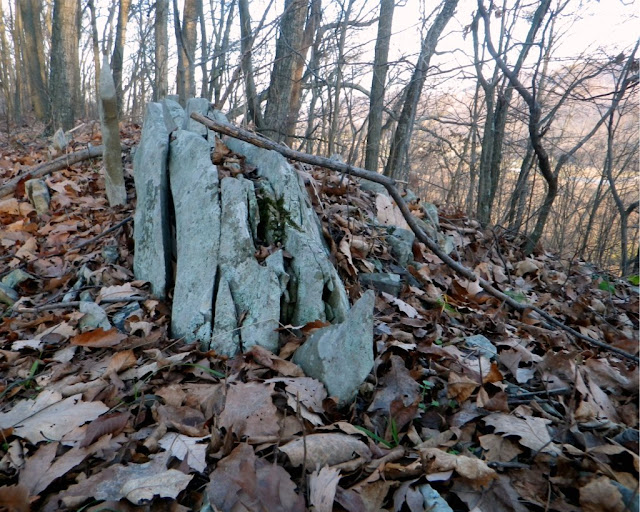 In the picture below, I turned perpendicular to the rock layers and took the photo towards the Tuscarora.
As the many bedrock layers (hidden by soil and vegetation) proceed toward the Tuscarora, they become stratigraphically older.  These rock layers, at one time, all continued in an arch (a fold of arching strata is called an "anticline") over the Tuscarora Mountain.  In the picture below, the boys are looking at fossils exposed in the "left over" layers, or "stumps" of the folds that have vanished. 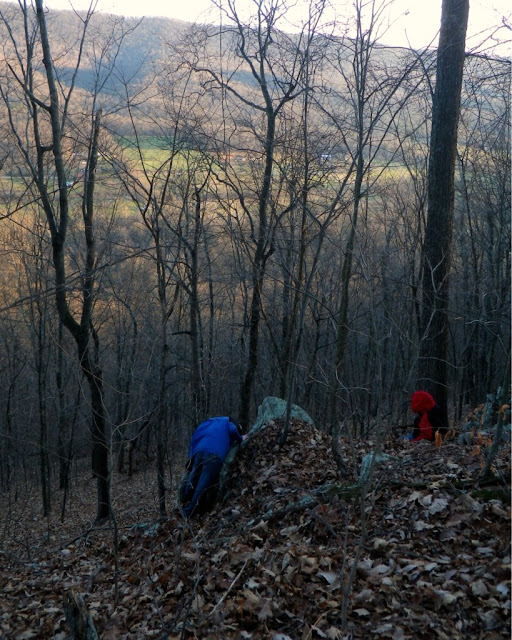 That's alot of mountain that is long gone!  Washed away. 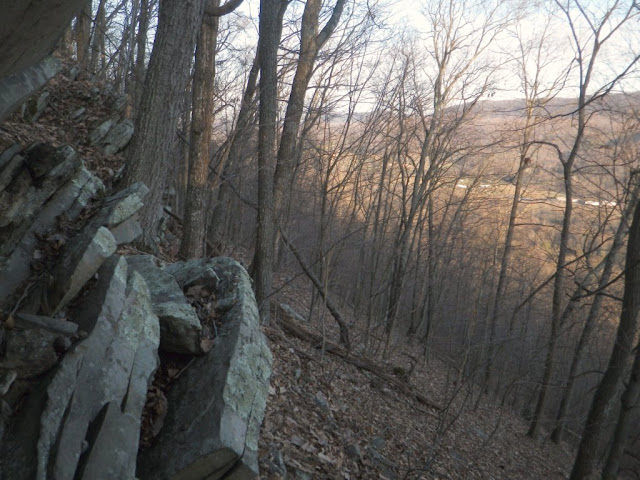 Thank God for anticlines.
Those folds brought up these fossil bearing layers to be exposed for the rambling naturalist to enjoy.
The folded rock layers also provided a nice place to find Ebony Spleenworts.
Posted by Dana at 1/04/2012