Yes, here is a picture of an old stump out in the woods on the mountaintop.  But, it is not just an ordinary stump... it is an antique Pitch Pine stump.  In fact, from what I can tell, this small Pitch Pine was felled in 1901, and its stump has weathered a century rather well.
Other than its very weathered, ancient, decay-resistant look, the most notable feature of the stump is it's height - just right for an axe-wielding lumberjack.  With the advent of the chainsaw, most stumps are cut close to the ground to maximize the lumber yield.
Another striking thing about the stump is the straight, level back cut - indicating cut (probably by a crosscut saw) rather than the tree breaking from natural causes.  Predictably, along with the back cut, there is also evidence of a face cut, or undercut... both evidence the tree was purposely cut down. 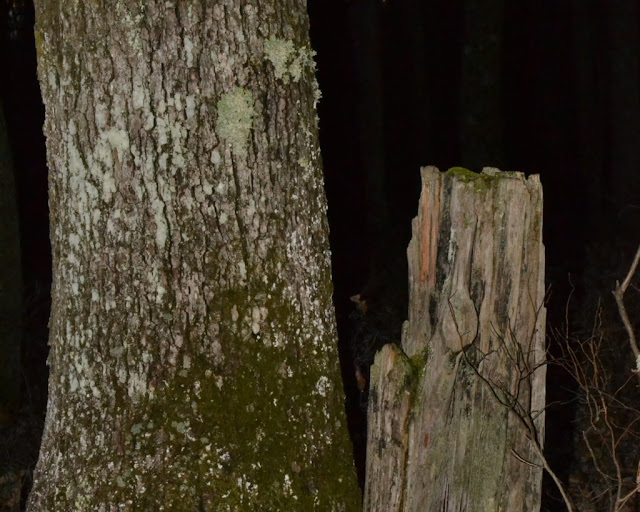 Along with that certain weathered look the stump has, there is evidence (charred areas) the stump survived a forest fire.  I know the forest fire hasn't happened in the last twenty years. In fact I have a newspaper article that describes the area burning in 1902.  "A forest fire that is said to have started along Burges run is sweeping over the 'Scootac region." - Lock Haven Express  April 23, 1902
I really think this stump has stood there for one hundred years and is another one of those stumps that hearkens back to the historic lumbering days in Pennsylvania when the lumberjack's axes rang in the timber.  By the diameter of the stump, I suspect it was a smaller Pitch Pine tree that was cut for prop timber - timbers to prop the ceilings of mines.
A local lumber company, the Glen Union Lumber Co, laid rails in the 'Scootac valley in 1900 (Lock Haven Express May 8, 1900).  They cut prop timber and saw logs in the area until 1909.  They even shipped quality Yellow Pine timbers for ship building. (The yellow pine we have around here is called Pitch Pine).
I've been calling this stump a Pitch Pine, so I should explain how I determined its species. I found a loose section of the stump and cross-sectioned it to identify the wood.  In the photo below, notice the large resin canals distributed evenly throughout the latewood... these are the distinguishing characteristics of yellow pines wood.  Note: here the resin canals look like white spots, rather than holes, because they are filled with crystallized resin.
﻿﻿    As I said, the yellow pine species that grows around here is the Pitch Pine (Pinus rigida).  The yellow pines are known for their resinous quality.  Some yellow pine stumps become saturated with resin after they are cut.  That pine resin has decay resistant properties and is one reason our stump has lasted so long.      Pine resin, or pine pitch is also very flammable.  When the pine pitch is concentrated in sections of yellow pine wood it is commonly used as fire starter and kindling.  Many a stump has been made into turpentine, pine tar, or fat wood. This resinous wood is called, fat lighter, fatwood, fat wood, lighter wood, or pitchwood.
We like to use fat wood as a easy, natural fire starter. 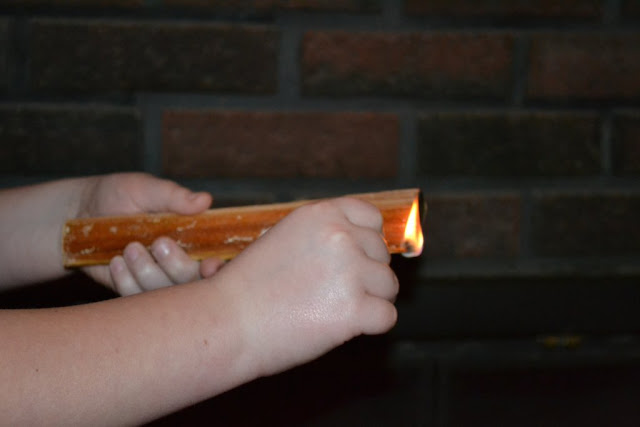 The pine resin might keep the wood from rotting but it  sure doesn't keep the wood from being used for starting a wood fire.
That's not just a thin sliver of wood -  it's about 3/4 of an inch thick by about an inch tall - not exactly wood that normally lights very easily with a match.
﻿Yeah for fat wood!
Now, I'd hate for this ancient relic of the Pennsylvania lumbering era to end up as fat wood kindling, wouldn't you? 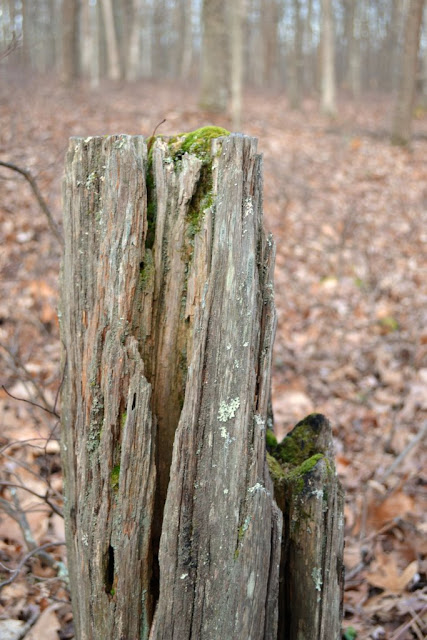 Some of these lumberjack era relics display interesting evidence of their age and if us bushboys, highlanders, mountaineers, etc, respect them as remnants of another era and leave them alone, the stumps will continue tell their story as they have for the last century. Plenty of Pitch Pine stumps are still out there on the mountain, slowly rotting away. Many of them are not preserved well enough to tell the the story of the loggers, and hopefully are the ones that occasionally get kicked apart and split for lighter wood...they are just old Pitch Pine stumps.
Question...why didn't the stump burn like a torch in the forest fire of 1902?
I bet it would now.
Posted by Dana at 2/02/2012