The Rock Cap Polypody, also called the Common Polypody, (Polypodium virginianum) drapes gracefully over this rock. I recently (at random) picked that small center rock for a closer look at its plant community. Since the Rock Cap Polypody grows right on the top of this rock (just like its name suggests), I'm posting about it first. 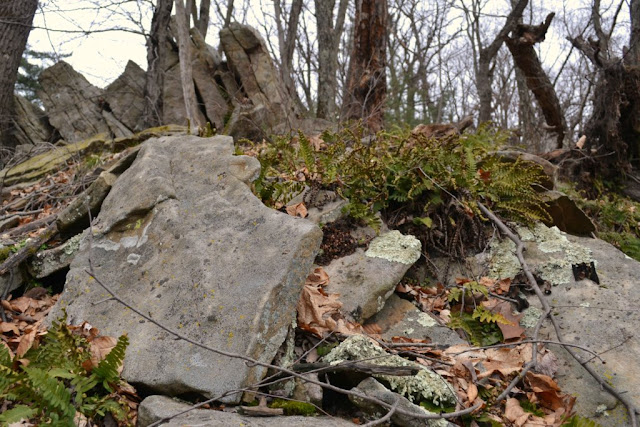 The Rock Cap Polypody is a medium-sized evergreen fern. 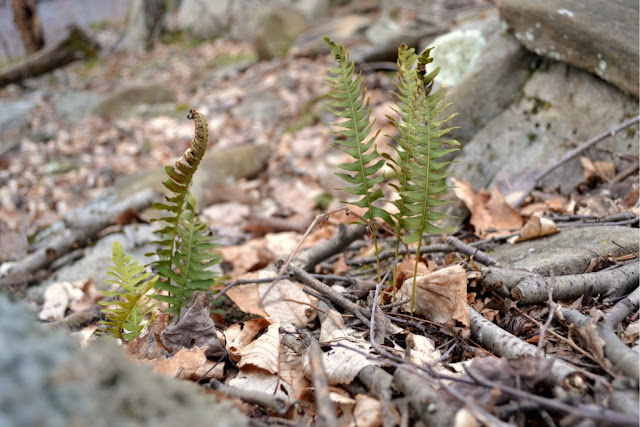 This fern seems to love growing on rocks. 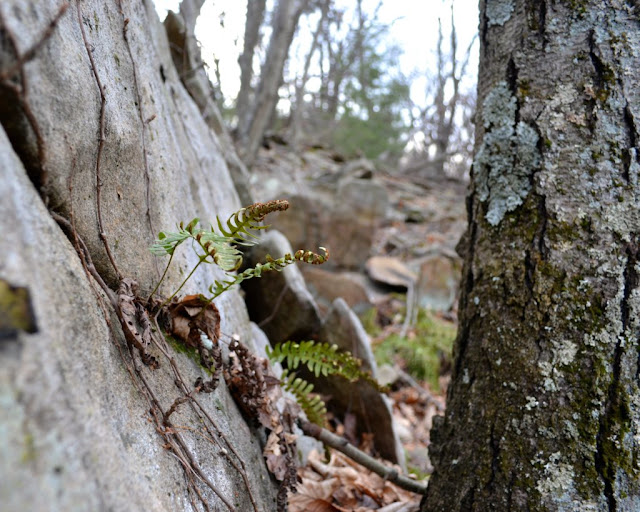 The fern can be found growing in a small cluster from a crack in a rock or from a cliff face.
The fern is also encountered in colonies, like this Polypody patch capping the large flat boulder on a talus slope. 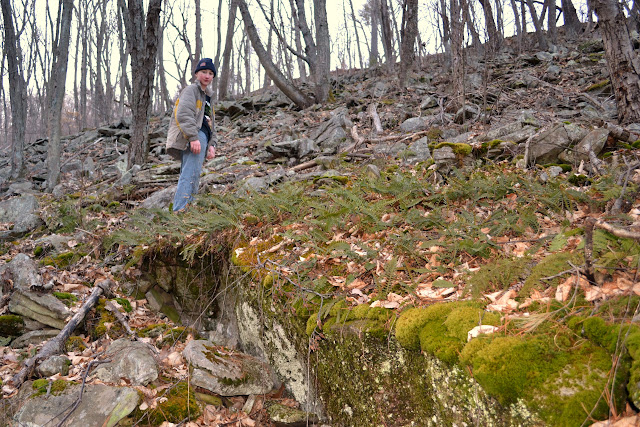 Rock Cap Polypody ferns have a distinctive look... see the photo of the Polypody frond below.
The leaflets, or pinnae, almost seem to zig-zag up the frond. 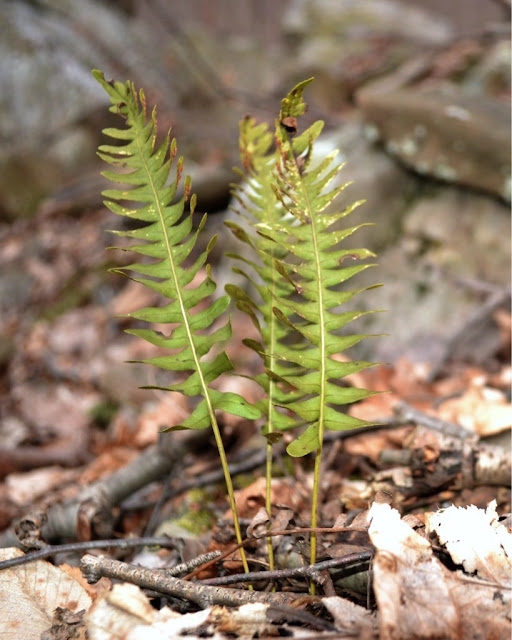 Here is a photo of the sori, or fruitdots, of the Polypody.
This close-up (below) picture of the Polypody's sori reminds me of a row of big hair-dos from the '70's. 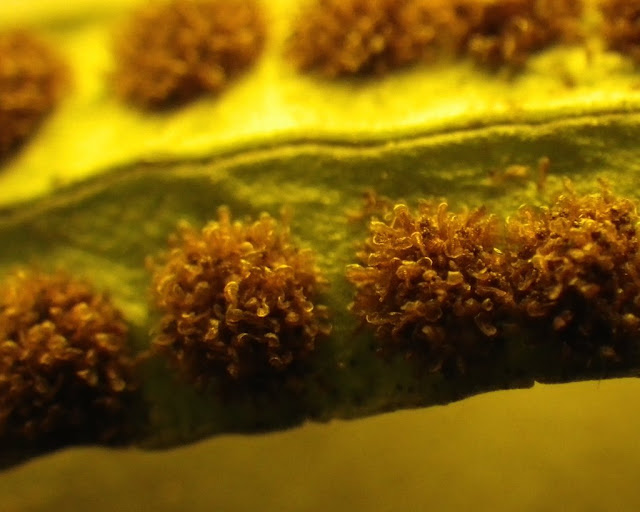 Actually, the sori are more interesting than they appear.  Even though these photos show spent spore cases (Polypodies release their spores in the fall), they remind me of the fascinating hygroscopic movements of the sporangia as they catapult their spores. 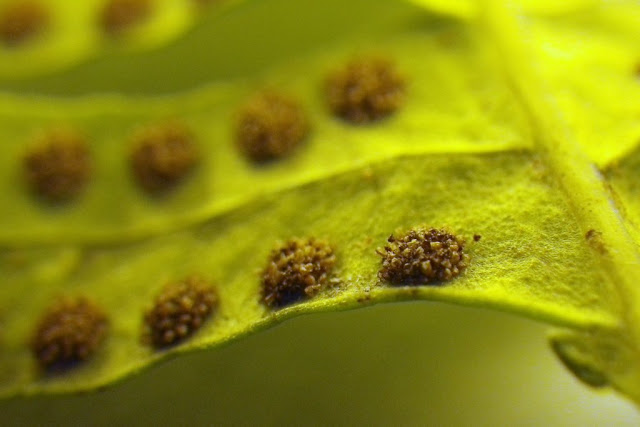 Each sorus is a mass of sporangia.  Here is a photo through my microscope showing a spent sporangium near the tip of the pointer. It looks like two clear cups connected by a spring. The annulus (the "spring") is wrapped around the capsule from the stem up over the top of the spore containing capsule and down to about the 4 o'clock position.  As the annulus dries, it tears open the capsule, revealing the spores in their "cups"... ready for launch. Later, as it dries further, the annulus snaps forward and launches the spores in a manner similar to a catapult. 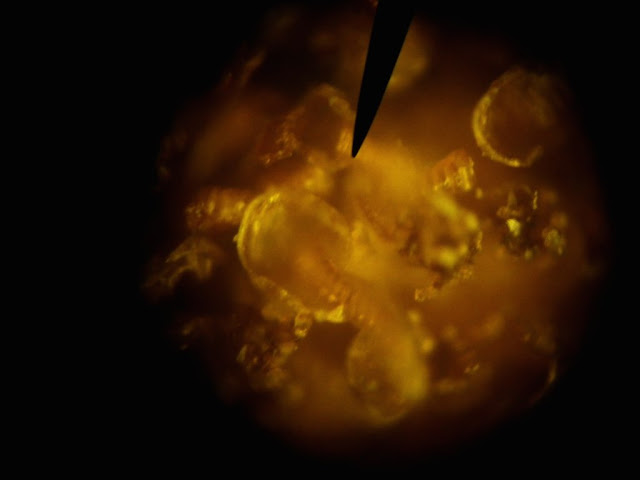 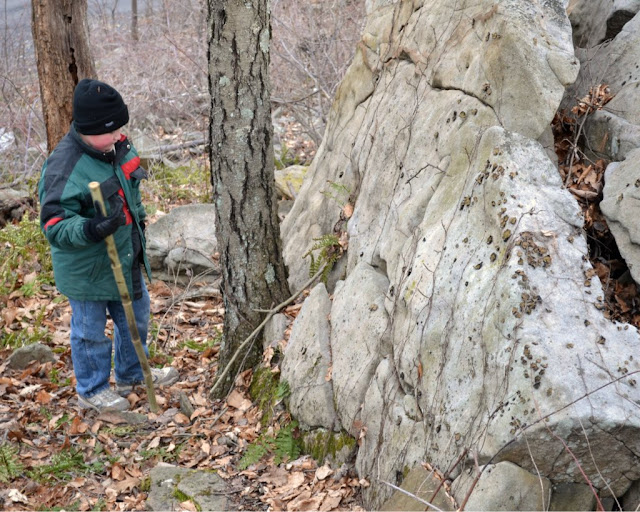 There are many rocks on the mountain which are capped with Polypody ferns.  There are many other rocks, like the rocks in these two pictures, where the ferns may have recently gotten their foot-hold with the help of the fern's effective hygroscopic catapult spore dispersal system.  Once established on the rock, the fern can also spread across the rock by means of spreading rhizomes. 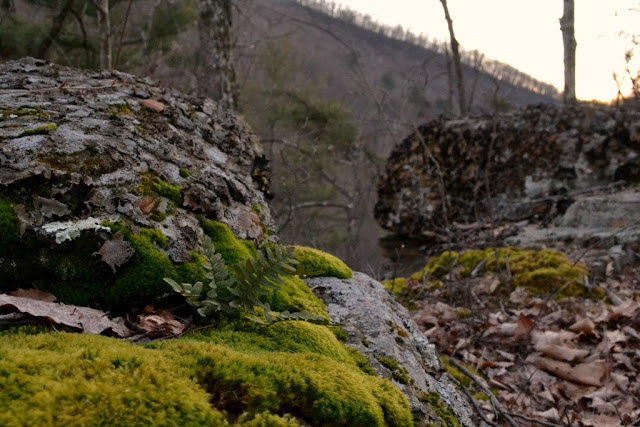 The young fern in this photo looks like a fairly new arrival on this moss and lichen covered rock.  I wonder who will win the competition for the rock's surface: the moss, the rock tripe, or the fern?  Perhaps someday a Polypody colony will "cap" these rocks and drape gracefully over the cliff face where the ferns can nicely catapult their spores into the wind.  Presently though, the fern, lichen, and moss are sharing the rock just like they are on the Random Rock of this post series.
See Random Rock part 1
Posted by Dana at 3/03/2012