I thought the kids would enjoy digging into a bee's underground nest. Who wouldn't want to know what is down in those dark holes behind the little sand piles? 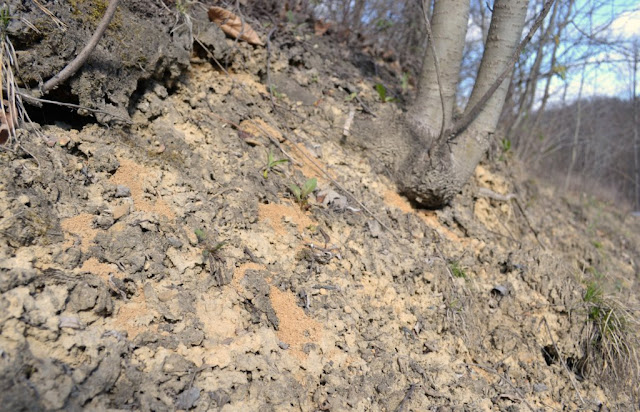 We cross-sectioned a burrow to learn about the nesting habits of the mining bees and also to learn what provisions the bee gathers for its larvae.
In the photo below, a cross-section of the bee's tunnel is visible above the trowel. 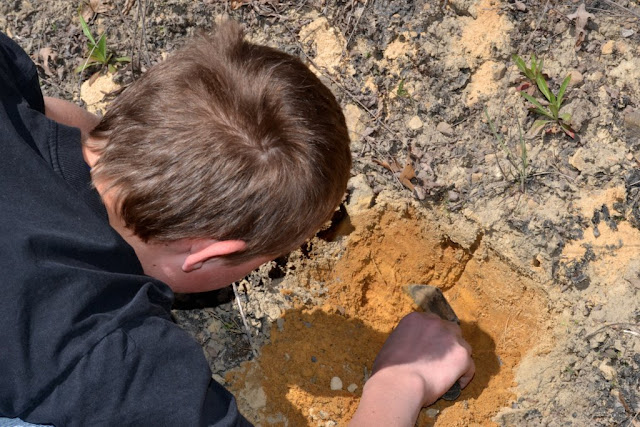 Digging along the tunnel without destroying it was a real challenge because the tunnel took a few turns and there were a few obstacles like roots and pebbles in the sandy soil.  The bee's burrow went down about a foot before leveling out and ending in the brood chamber.  See the exposed tunnel in the picture below. 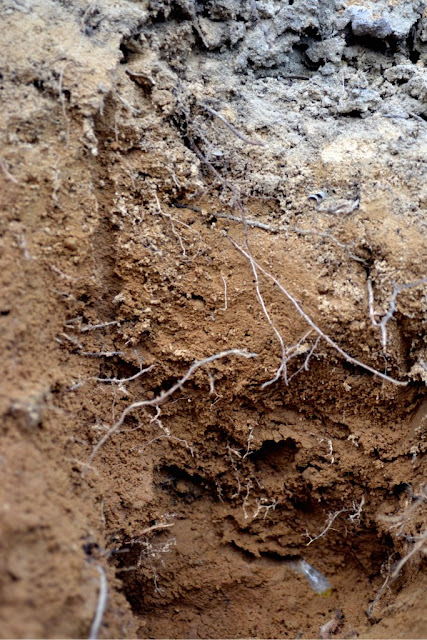 The white "plastic bag" at the lower right of the photo is the brood cell liner.  I was surprised to find a lining in the brood cell because I thought we were digging out a miner bee's burrow.  Miner bees (Andrena spp) do not make a cell liner quite like this.  I obviously had jumped to conclusions on the identity of these bees.
The burrow we profiled was made by a Cellophane Bee (Colletes).  Cellophane Bee brood chambers are lined with an amazing polyester cell liner... a plastic bag... that holds a mixture of nectar and pollen to feed the bee's larva. 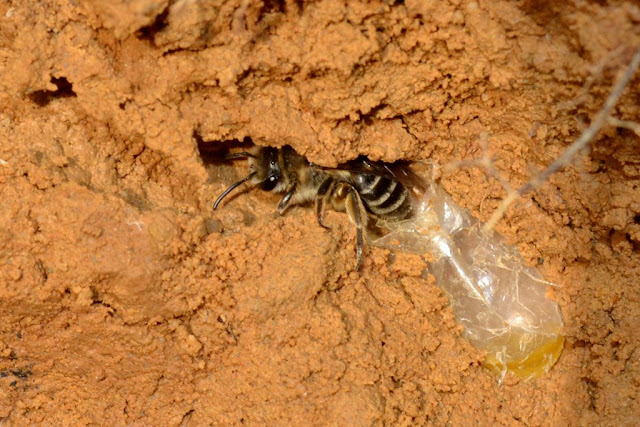 In my two previous posts on these bees, I called them Miner Bees but I didn't look closely at them before I made that assumption.  I should have made one of the bees stick out its tongue and say, "Ahhhhh". Cellophane Bees have a bi-lobed tongue, while miner bees have a pointed one. Also, there is a difference in their wing venation.  On the wings of Cellophane Bees, the second recurrent vein curves toward the wing margin. 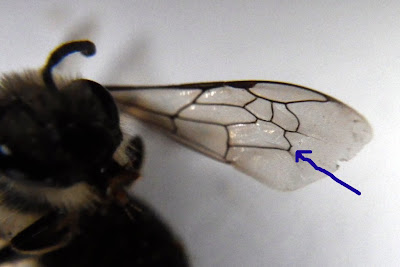 Compare that Cellophane Bee with a photo of a miner bee I found nectaring on some flowers on a nearby mountain.  On miner bee's wings, the same vein is straight. 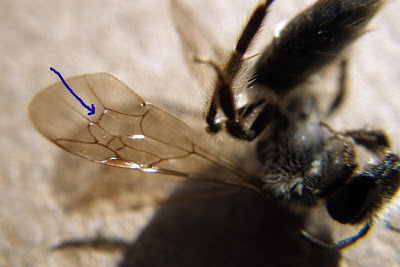 When we carefully dug along the Cellophane Bee's tunnel, we found that the bee had made multiple brood chambers about a foot down in the ground.  We also noticed that the tunnel levels out just before the brood cell.  These nests ,with their polyester liners, were always tilted at a certain angle like the one pictured below. 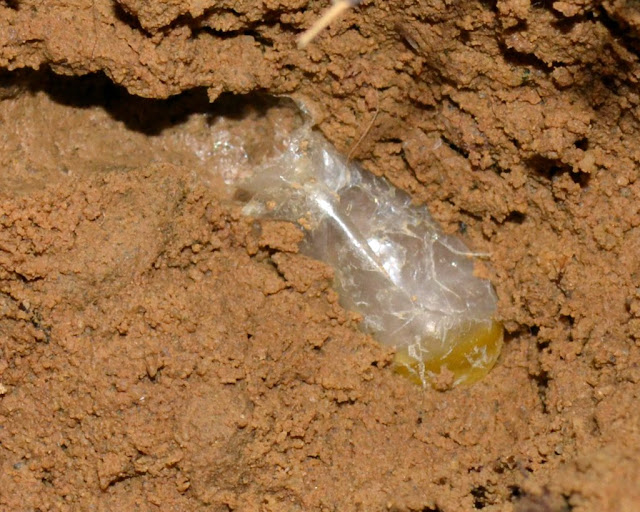 Notice the small amount of the nectar/pollen mixture the bee has gathered and placed in the newly made nest liner.  The finished bag will be mostly full of food stores for its larva.  When the  bee is finished filling a bag, it lays an egg and attaches it to the upper part of the neck of the liner.  Then it plugs the opening with what looks like glued together sand.
In the photo below, a young Cellophane Bee is peering out of its polyester home where it has been growing since last spring.  It's all there... the new bee, its brood cell liner, its plug, and even some of its food stores.  Soon it will venture out... stretch its wings.. etc. 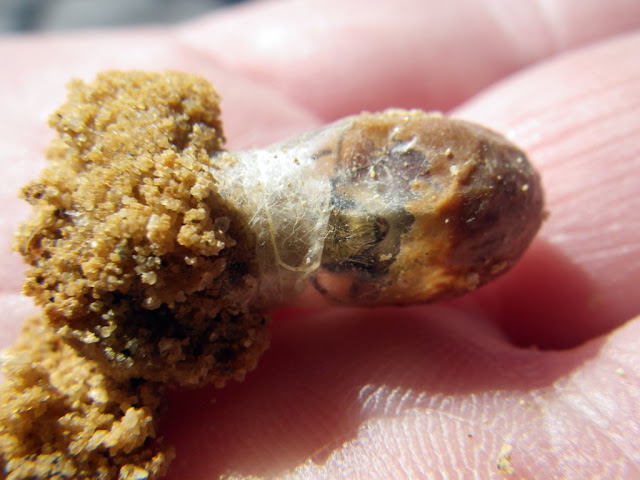 When the Cellophane Bee makes its "plastic bag" nest liner, it first lays down a mesh of silk and then coats it with the polyester.  The "plastic" forms when the bee mixes saliva with a secretion from its Dufour's gland which it applies over the silk fibers.  In the photo below, the silk fibers embedded in the polyester liner remind me of fiberglass and resin. 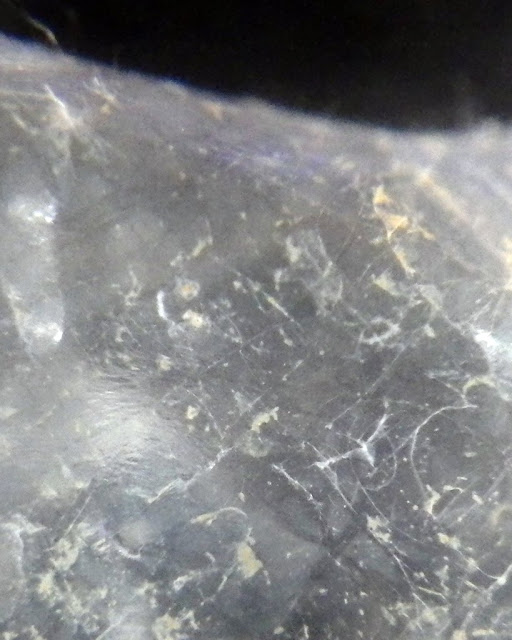 We did an experiment to see if the brood cell liners are waterproof...  I filled the "little plastic bag" with water and held it up to the light.... look guys, no leaks! 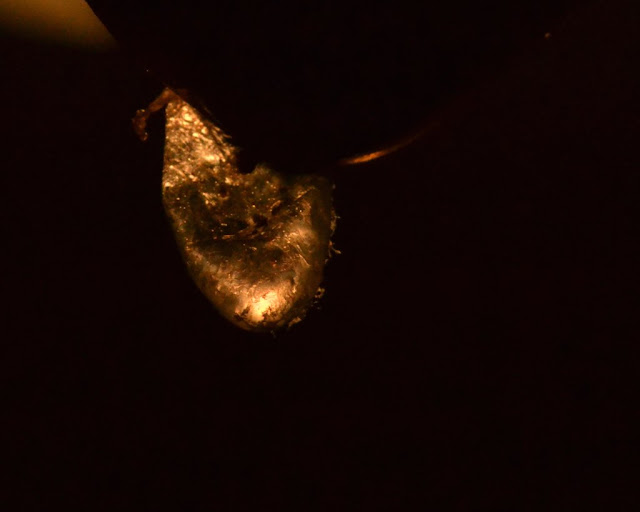 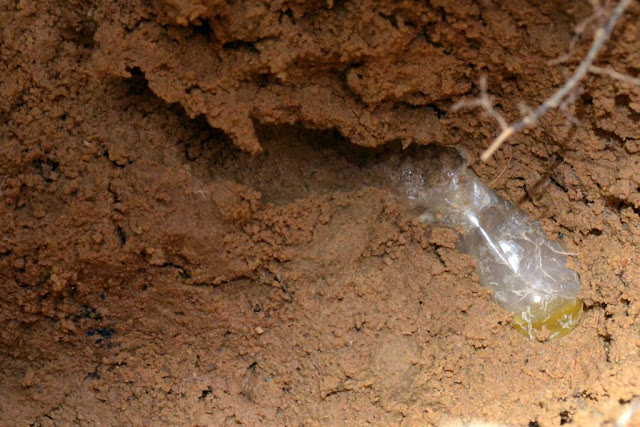 I guess you could say we unearthed a subterranean factory where fiber-reinforced plastic bags are manufactured.  Another way to look at it is; the bees bury barf bags to feed and house their babies.
Anyway, digging bee's nests was quite entertaining! 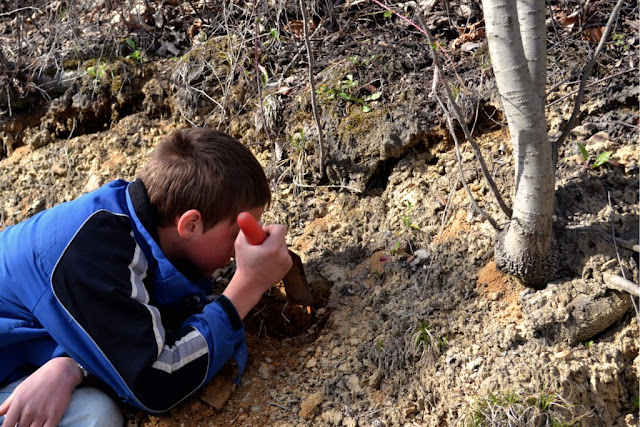 Part I of the Miner Bees

Part II of this mini series on Miner bees
Here is a post on a cool wasp that digs holes in the ground.
Posted by Dana at 5/08/2012