This is a Cuckoo Bee.
Yes, that was my first thought when I saw it hanging there on the branch tip! 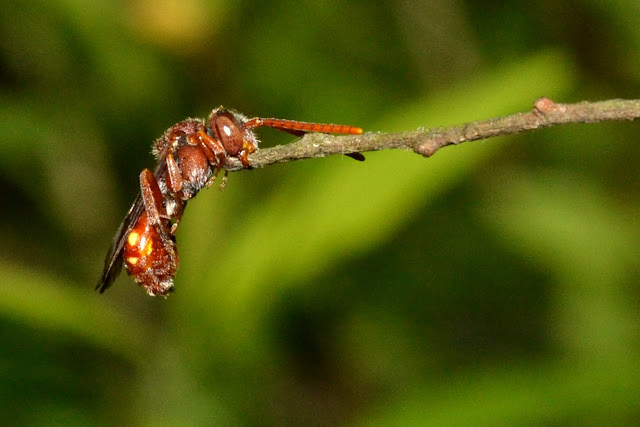 I really thought the bee was cuckoo when I first saw it suspending itself from the end of the twig by its jaws.  Eventually I realized this is how the Cuckoo Bee spends the night.  What an incredibly odd way to sleep! 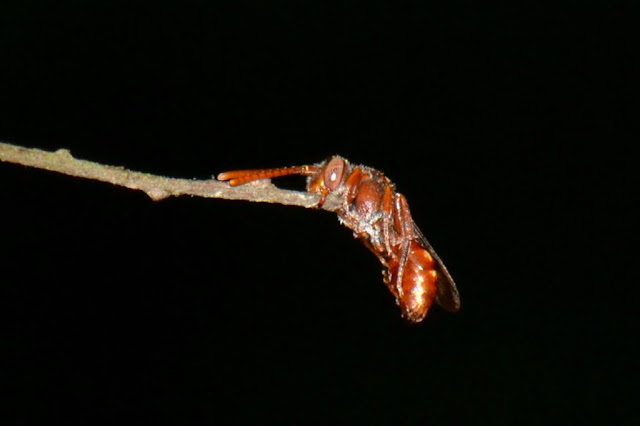 Perhaps the bee is mimicking a flower, or a dried-up leaf.  Maybe it is safer hanging while sleeping.  Maybe the bee finds it easier to hang by its jaws rather than by its legs.  Whatever the case, I've observed the bee clamp its jaws on the tip of a small twig and hang there as evening approaches.  I've gone out at night (with a flashlight) and showed the kids the sleeping bee.  We have also checked to see if it was still there in the morning, and concluded the bee must spend most of its life in this unusual position. 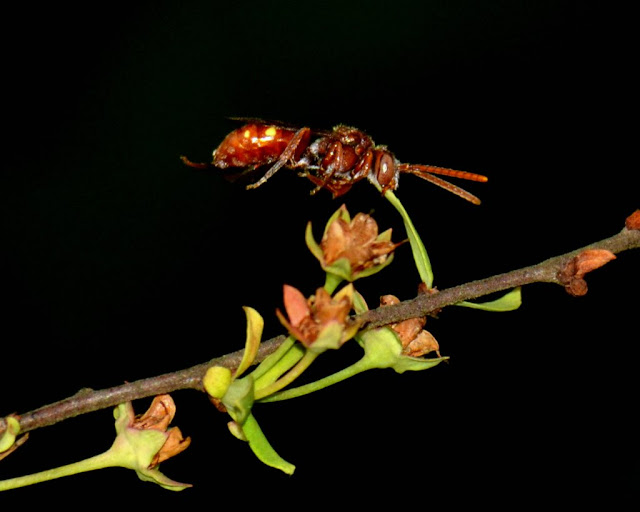 I've seen many of these Cuckoo bees patrolling areas where Miner Bees and Cellophane Bees like to nest.  I've read that Nomada species are cleptoparasites of other bees nests.  This means Cuckoo Bees lay their eggs in other bees nests and later the Cuckoo Bee's larvae eat the host's larva and food stores.  Here is a photo of a Cuckoo Bee...  one of many I saw roaming around an old road-cut in the woods. 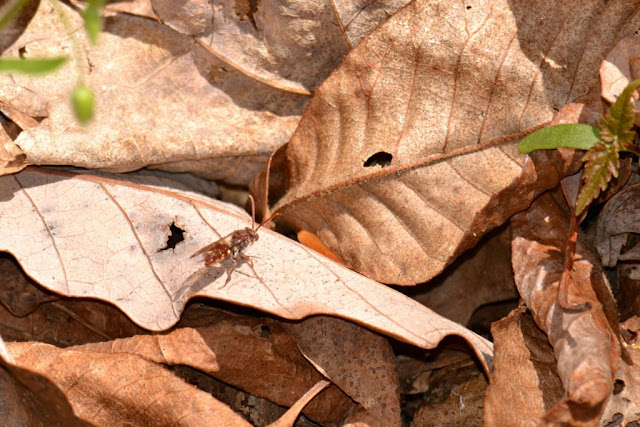 These reddish bees with yellow spots on their abdomen were patrolling every nook and cranny of the bank searching for miner bee nests.
The other evening when I noticed this cuckoo bee examining a bush in our flowerbed, I ran for my camera.  When I returned, the bee was still there... crawling on the branches in a peculiar way, so I snapped a few shots and caught this amazing night-time ritual of a Cuckoo Bee. 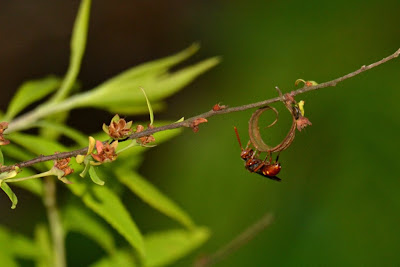 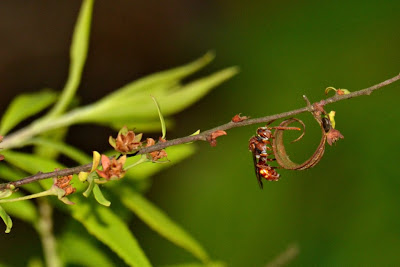 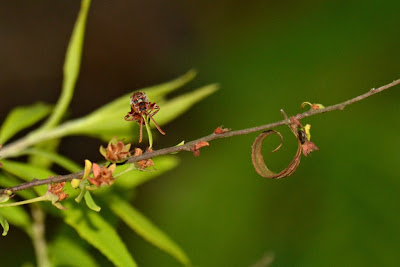 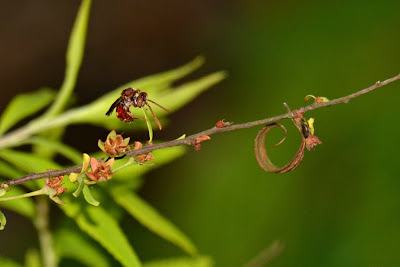 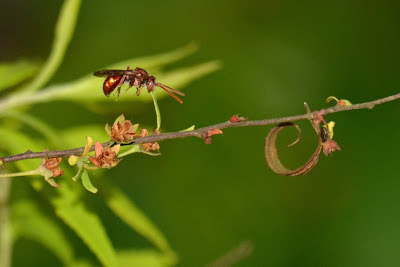 Watch this amazing feat of skill and daring! 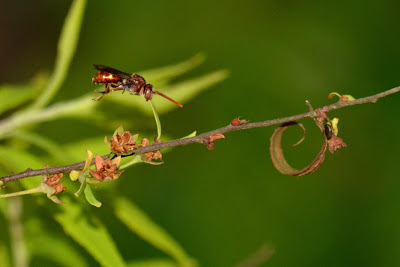 I can sleep on my head!

Incidentally, capturing these pictures was slightly difficult since the bee was bobbing and swaying with the gentle night-breezes. 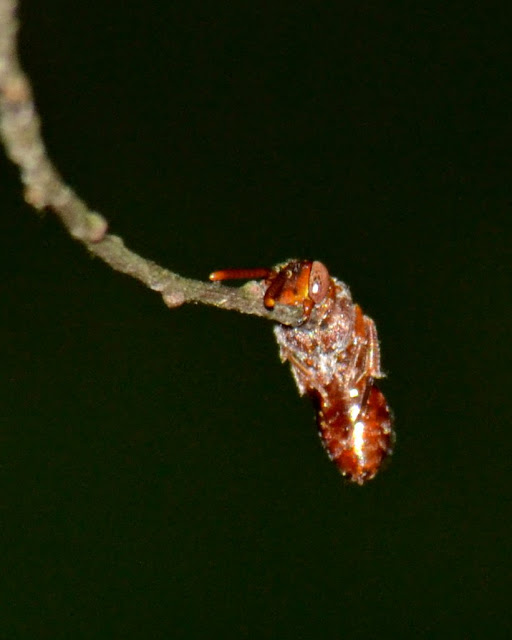 What better way for a flying insect to sleep than suspended horizontally from a swaying twig?
Sleep tight!... or, rather, Bite tight! Don't let the whatever bite... 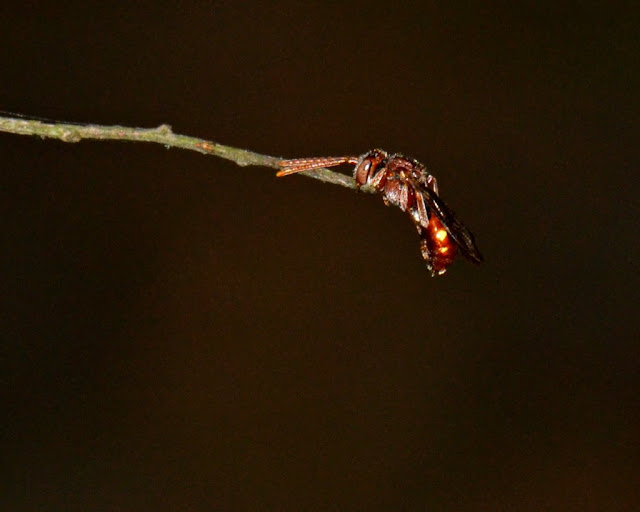 Good night and sweet dreams, Cuckoo Bee!
...dreams of sustained, effortless flying...
..dreams of soaring and swooping along an endless, forested bank... full of nests of ground-nesting bees...
and, no, your nights won't all be full of artificial lightening flashes, so come back again.
Posted by Dana at 5/21/2012

Email ThisBlogThis!Share to TwitterShare to FacebookShare to Pinterest
Labels: Bees