Wild Lupine, or Sundial Lupine, has a few last stands here in Pennsylvania. 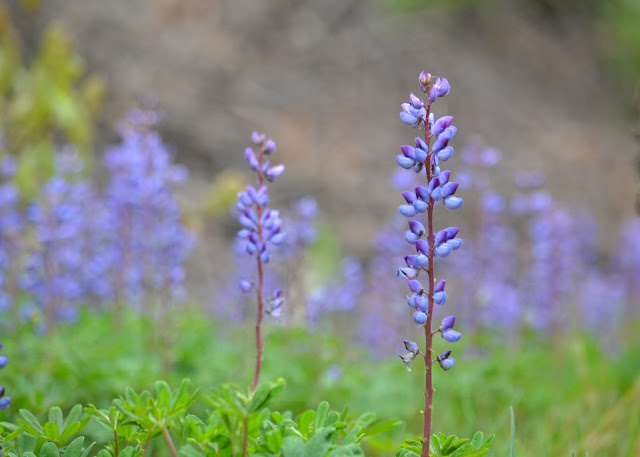 This roadside patch of Wild Lupine (Lupinus perennis) is one of the larger ones I have seen around here, so I stopped for some photos. 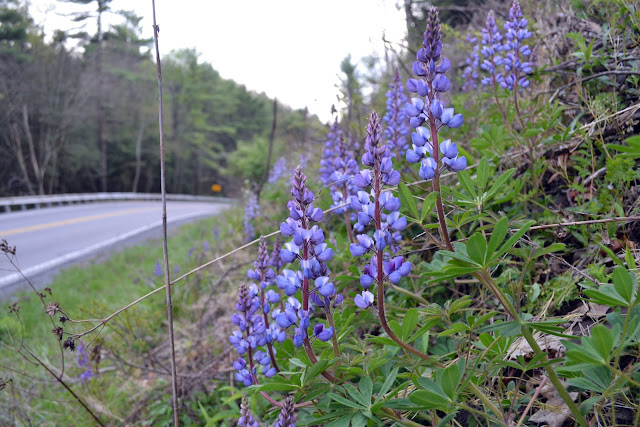 I posted about this patch of Wild Lupine last time.  However, this time I want to look closer at the flowers.
As I photographed the flowers, I noticed many ants crawling on the Lupine's stems and flowers.  In fact, in one photo I snapped, a spike of flowers had at least ten ants.  In the picture below, some ants are exploring a flower. 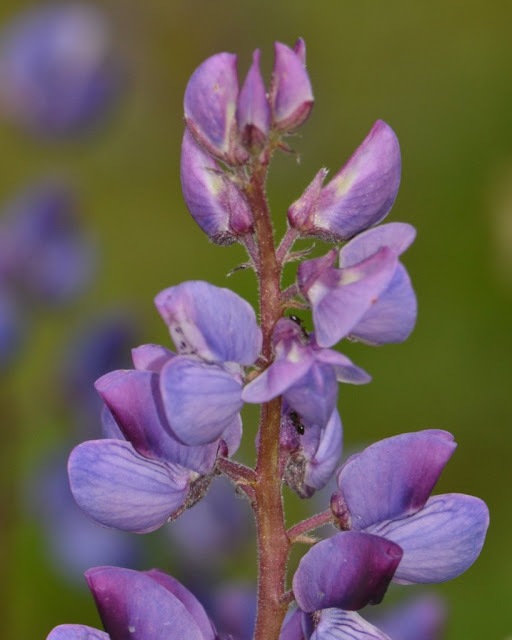 I wonder what the ants find attractive about Wild Lupine.  Are they farming aphids?  Stealing pollen?  Looking for nectar and not finding it?   Wild Lupine doesn't supply nectar, at least that's what I've read.  Here's a quote:
"Pollen is the only pollinator reward offered by L. perrenis and its removal requires the manipulation of a pump mechanism in the flower..." (pg. 22. see footnote) 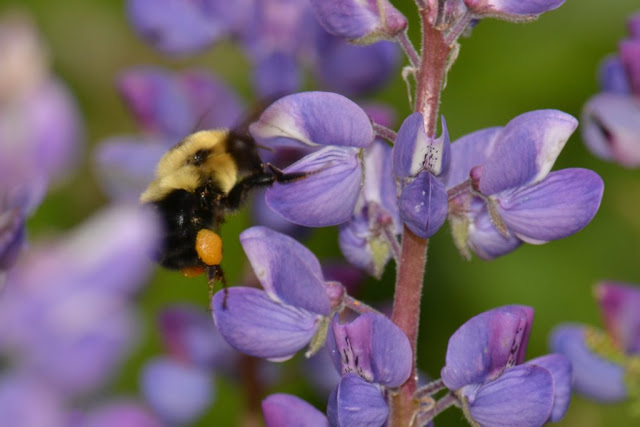 In the picture above, the bee is beginning to land on a flower and is slightly depressing the "wings" of the flower.  The tip of the "keel" is poking out between the wings and is visible between the bee's head and its foreleg.  Notice the other flowers in the whorl are waiting to be "tripped".
In the photo below, a Bumblebee has landed on the flower and has depressed the wings exposing the keel.  The keel is pressed against the bee's mid-section. 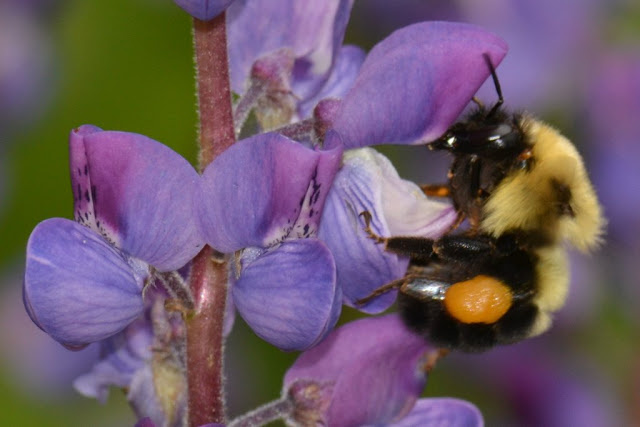 In the photo below, I tripped the piston and some pollen has been extruded from the tip of the keel.
A metered dose of pollen by pushing down on the "wings"... reminds me of when I was a kid... enjoying candy from a nifty PEZ dispenser. 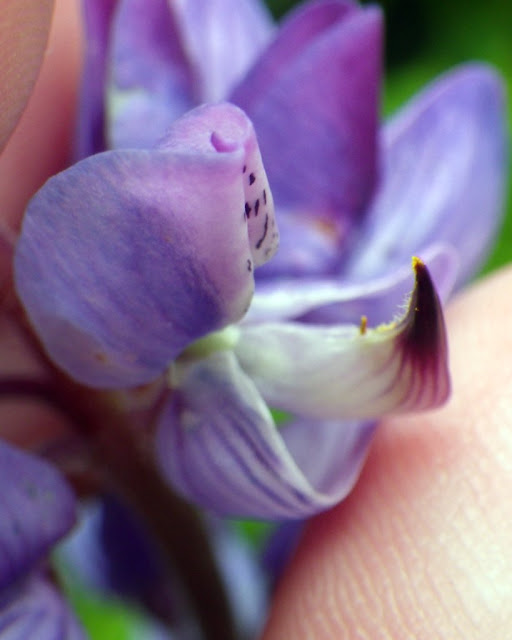 Let's do that again! 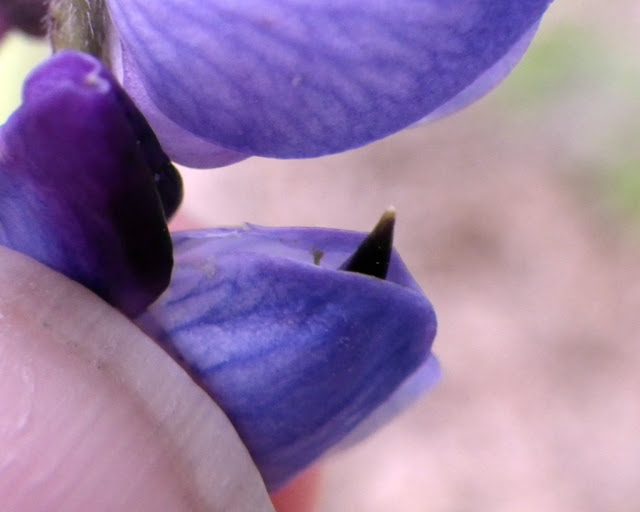 Slight pressure reveals the tip of the keel. (above)
Fully tripping the mechanism dispenses a bit of pollen. (below) 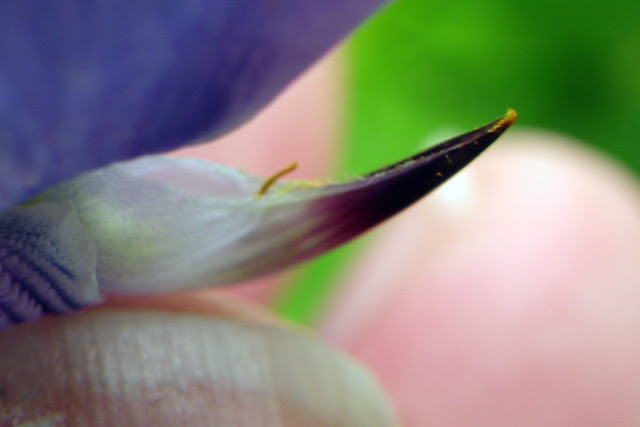 How's that for a bee-activated pollen-dispensing pump mechanism?
Well, the bumblebees were busy, so, to the right of the bee (photo below), some of the flowers have been tripped and need some time to recover and reset themselves. 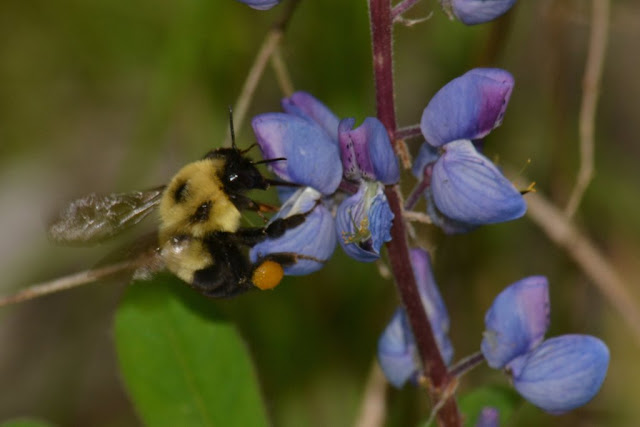 Look at Bumblebee's plump pollen basket!  Bumblebee and I have been well rewarded for manipulating those piston-action pollen dispensers.
Now, I wonder... what were those ants after?  I guess that's a good excuse to stop again at the Wild Lupine patch, eh?  Besides, I kinda' like those lever-action Lupines.


The quote was from a dissertation by
Gregory Keith Shenk, "Developmentally plastic responses to pollinators by Lupinus perennis flowers and what they tell us about the pollination mechanism in the general lupine flower" (January 1, 2005). Dissertations Collection for University of Connecticut
Posted by Dana at 5/18/2012