From Bird Poop To A Butterfly

When I first saw this caterpillar I thought, "Wow, that caterpillar looks like bird poop". 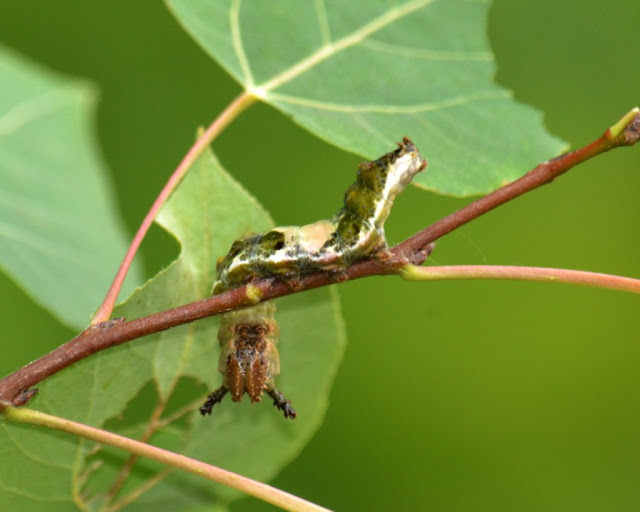 Not only was the caterpillar camouflaged to mimic a bird dropping (with a disgusting-looking smear of white and green), but it had this strange habit of hanging its head down below the branch... as if... part of the "bird dropping" was about to drip off the branch.  It didn't immediately cross my mind that the ugly caterpillar would soon turn into a beautiful butterfly.
Later, I took notice of all those spikes on the caterpillar's head as well as those odd bumps all over its body.  Simply ugly. This is the caterpillar of the White Admiral butterfly... and there is no similarity between the two. 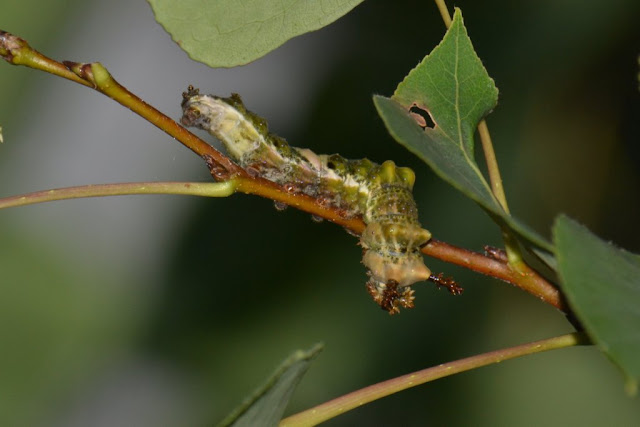 Needless to say, I decided to keep watch over the caterpillar. It's not everyday that I run into a caterpillar disguised as bird droppings... plus, it was right at eye level on a branch of a young aspen in our backyard. 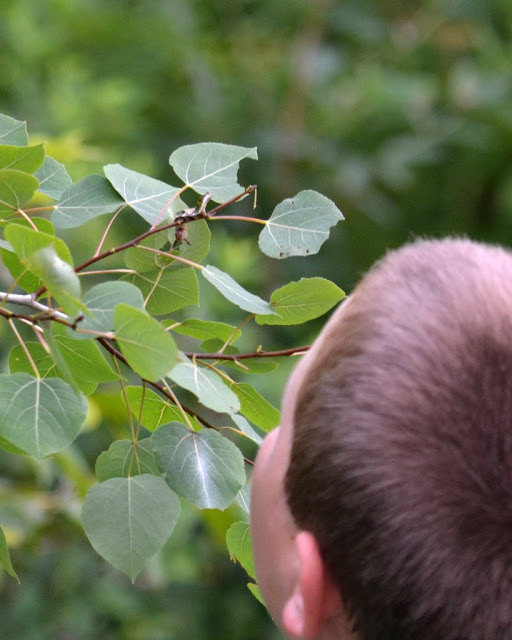 The caterpillar's bird-dropping disguise wasn't its only defense.  It also had a rather unusual defensive posture.  When I poked the caterpillar it drew itself into the position pictured below.  Perhaps this position is somehow part of its disguise. Or maybe it makes the caterpillar look dangerous or more unappetizing. 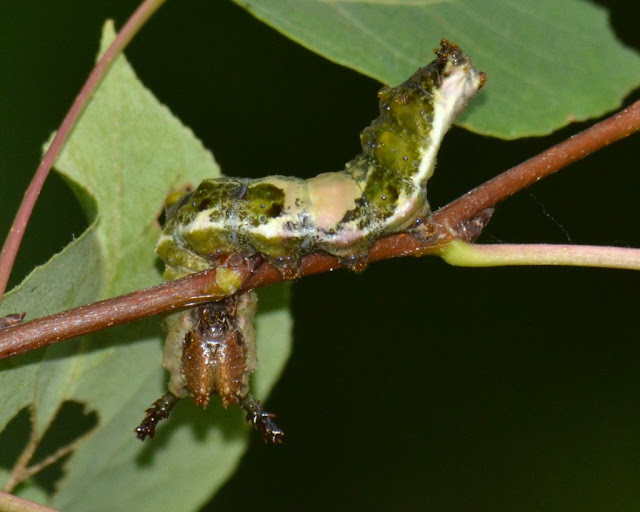 The caterpillar seemed to rest in a similar position.  I often saw the caterpillar in the position pictured below... unless it was eating aspen leaves.  Maybe this pose is just a safe way for it to rest (spiked horns lowered and ready to swing an an approaching enemy).
See what happened when an ant came along... 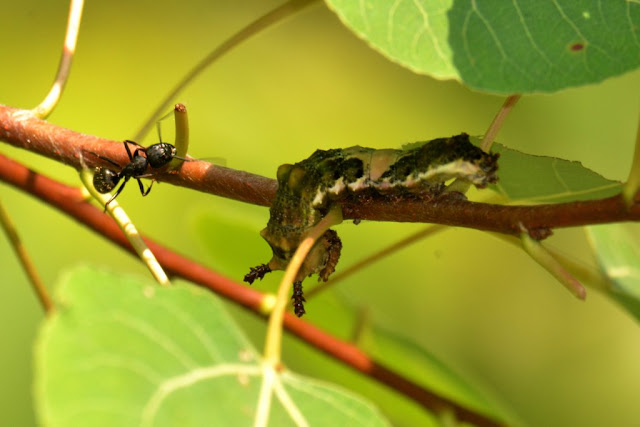 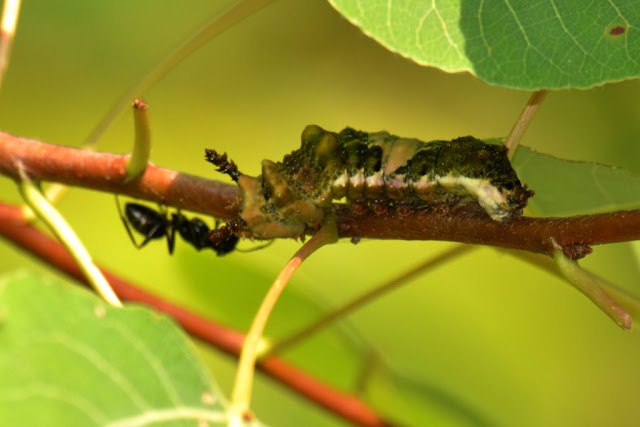 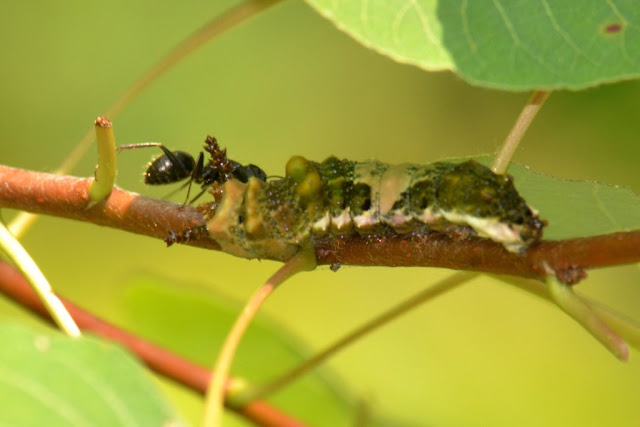 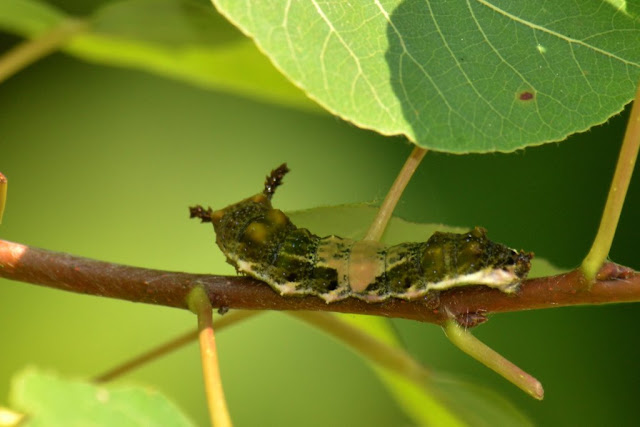 The ant fled.  I reckon it fled all those spikes and bristles. 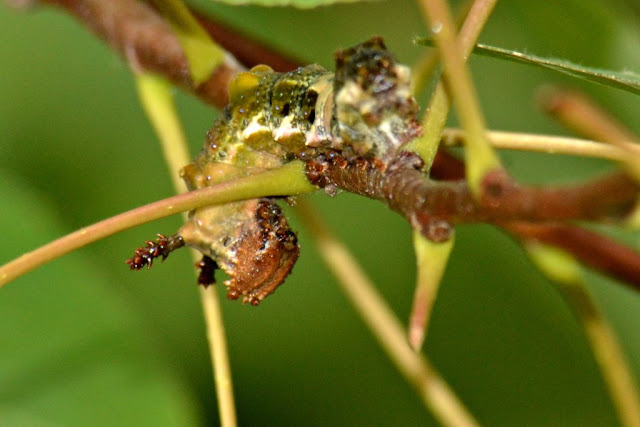 If I were the size of an ant... facing that caterpillar's menacing face would be like coming face to face with an angry moose.
Since the caterpillar was so unusual, and also so conveniently located, I covered the aspen branch with mesh to protect the caterpillar from any sharp-eyed birds or parasitic wasps.  The thought was to keep it safe (and confined) until it turned into a butterfly.  Shortly thereafter the ugly caterpillar pupated. 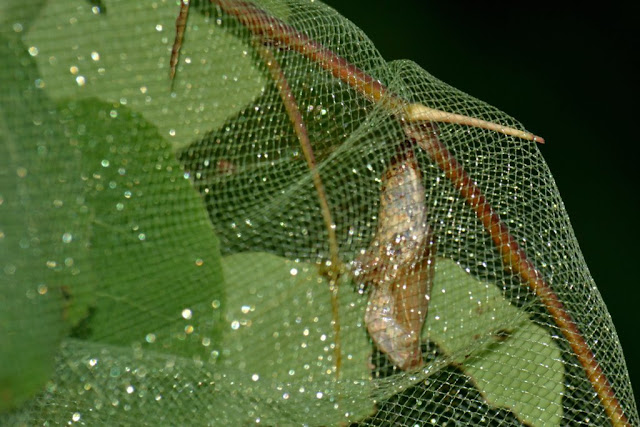 In other words, that ugly, disgusting, bird-dropping mimic caterpillar turned into this odd-shaped chrysalis. 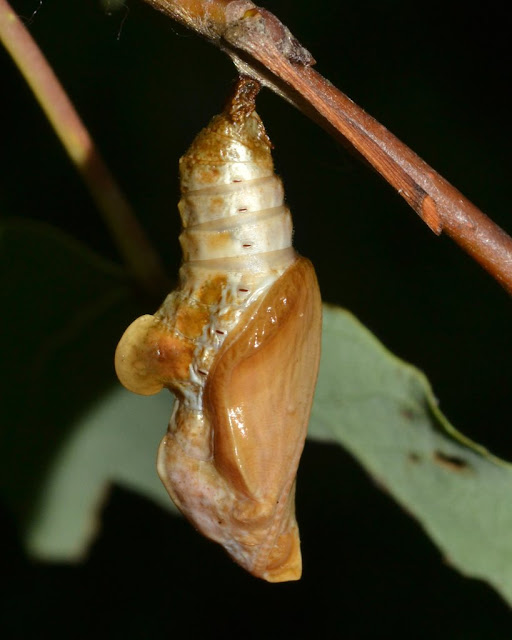 One week later, the metamorphosis was complete... when a beautiful White Admiral butterfly emerged from that strange-looking chrysalis.  Lovely butterfly, isn't it? 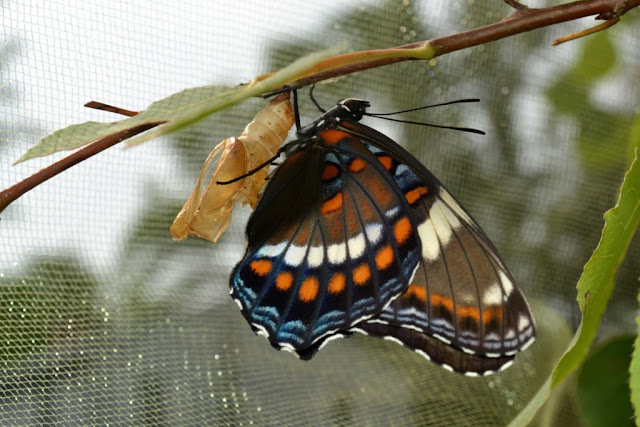 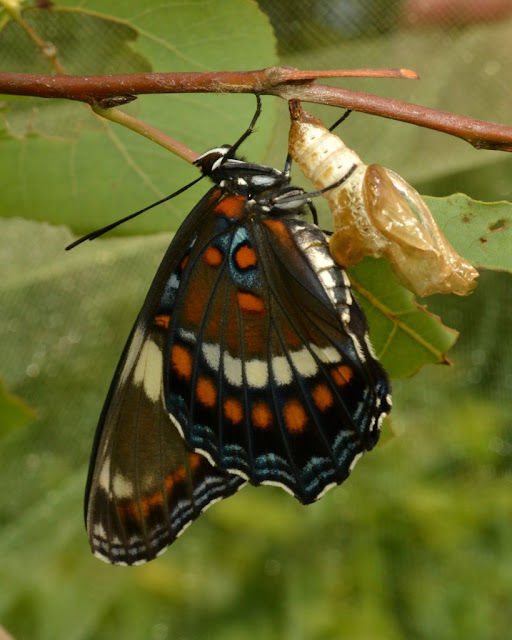 I snapped a photo of the upper side of butterfly's wings seconds before it flew away.  The photo shows the circling band of white spots, or bars, against the black wings that are highlighted with iridescent blue. 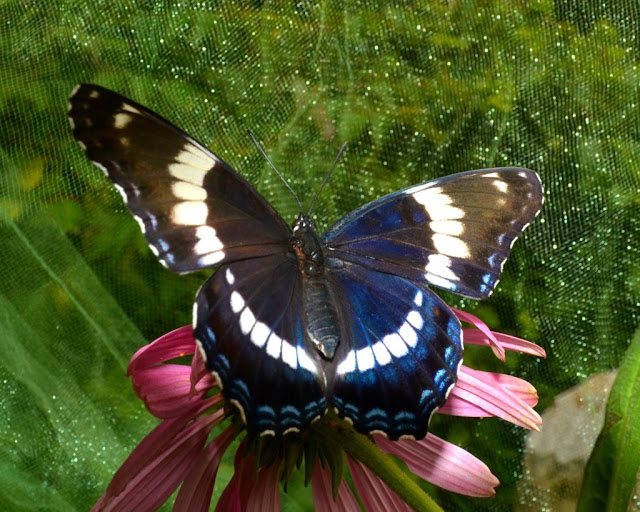 I'm slightly disappointed I didn't get to witness the whole life-cycle of this butterfly.  Somehow I  missed spotting the butterfly egg and even the caterpillar when it was young.  However, I (we) did get to see that  bird-poop-looking blob of a caterpillar turn into a beautiful butterfly... now that's complete metamorphosis on display!
Posted by Dana at 7/17/2012