Leaf Cutter Bees And Neat Round Holes In Rose Leaves

I always marvel at the neat, round holes in the rose leaves... precision cut by leafcutter bees. 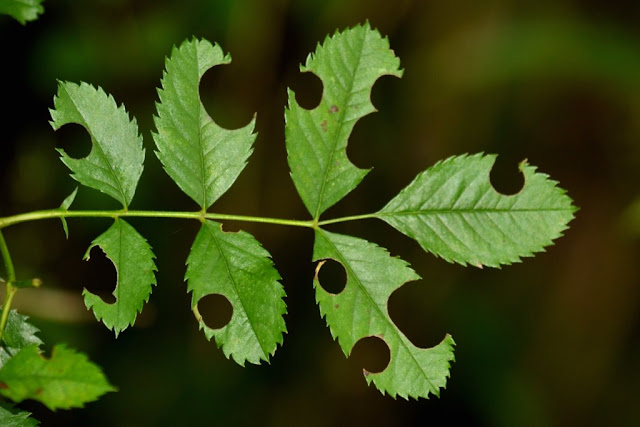 The small leafcutter bee removes these leaf cut-outs, leaving holes neat enough to look almost like they were made with a hole-punch or a cookie cutter.  The bees roll up the leaf pieces, fly them to their nests.... which are (preexisting) tunnels in wood, or in the ground. The leaf circlets are used to line the bee's nest cells. 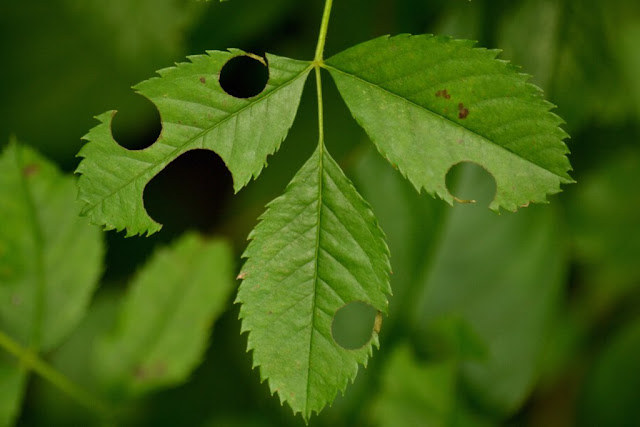 I've never had the good fortune of having a camera in hand when the leafcutter bees were doing their leaf shearing, so all I have to illustrate the leaf cutter's fantastic actions is a picture after the fact. 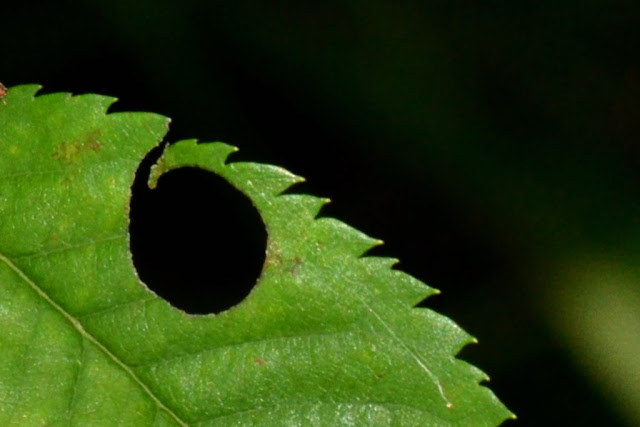 Here is a photo of a leafcutter bee gathering nectar and pollen from a thistle flower-head. 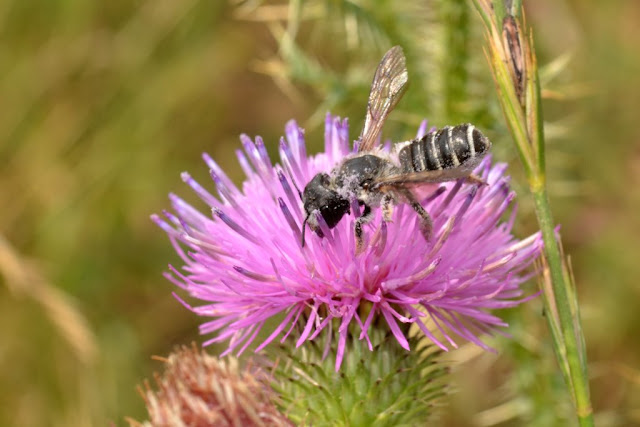 The bee in the picture above is not necessarily the kind of bee which cut the holes in the rose leaves (top picture).  But, it is one of the many species of bees which are leaf cutters.
At the bottom of the picture below, there is a leafcutter bee nest which was removed intact from a hole in a barn board. Notice the various leaf pieces which are fashioned into the cylindrical nest-lining.  One of my children placed their finger in the photo for scale. 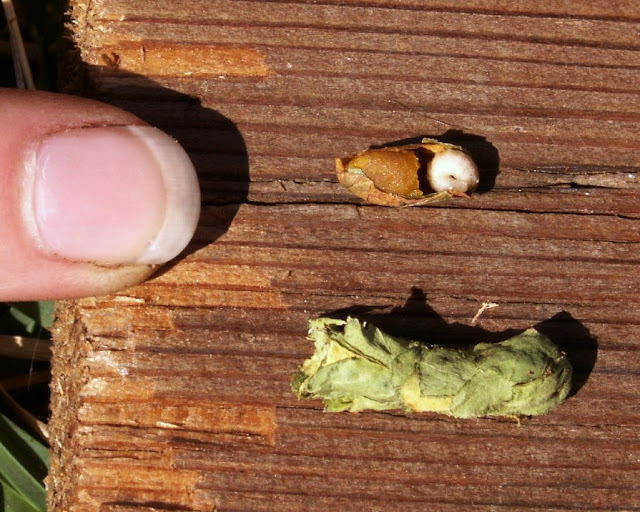 The other object in the picture above, is a cross-section of the leafcutter bee's nest material which shows part of a leaf-liner containing the mixture of pollen and nectar she places inside her leaf-lined tunnel.  The white "grub" is a leafcutter bee larva which had been feeding on that yellow/orange pasty mass of pollen. 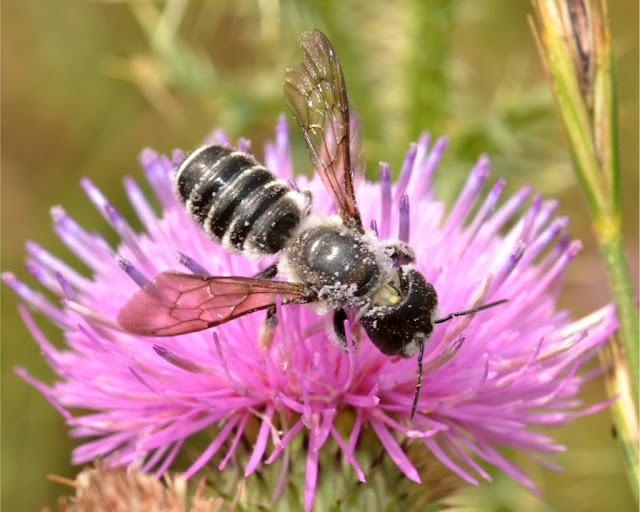 Leafcutter bees are smaller than honey bees.  Their heads seem to be extra large for the rest of their bodies. 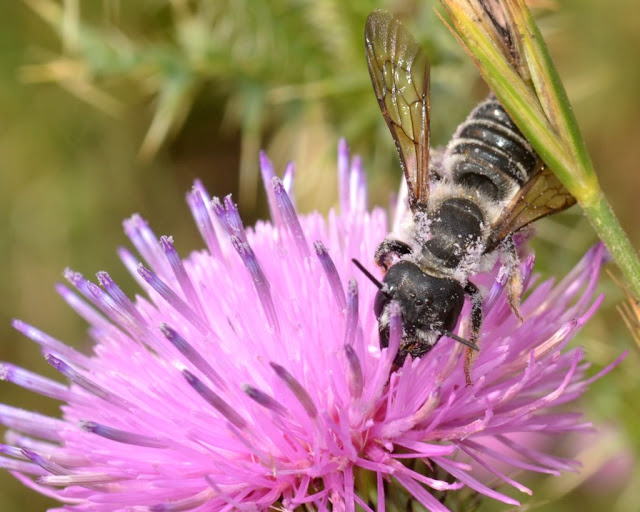 Leaf cutter bees gather pollen on the pollen brush on the underside of their abdomens, rather than in pollen baskets on their legs like some other species of bees. 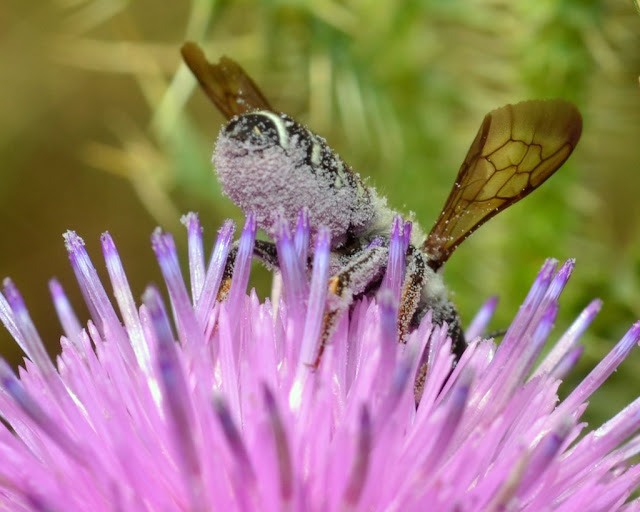 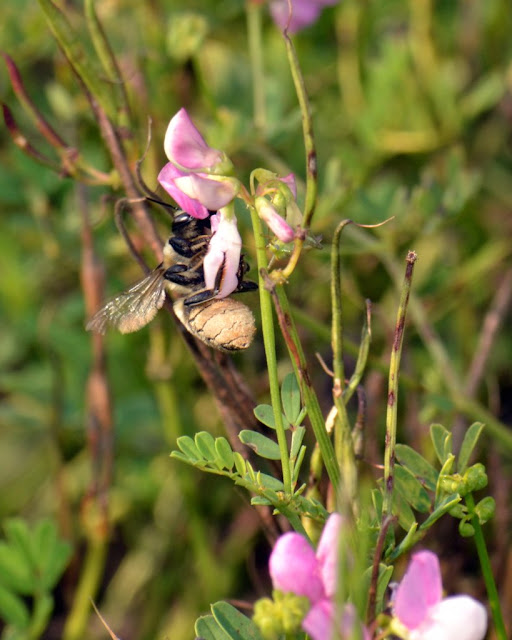 I like to watch the leafcutter bees on thistle flowers... they seem to "swim" among the florets. 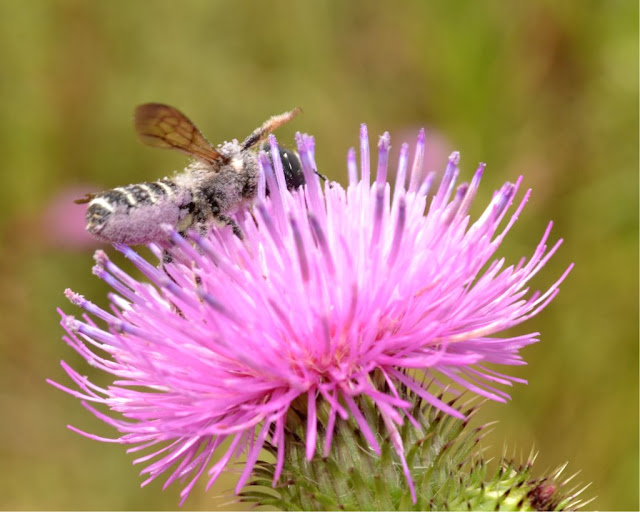 They also hold their abdomens in an unusual position 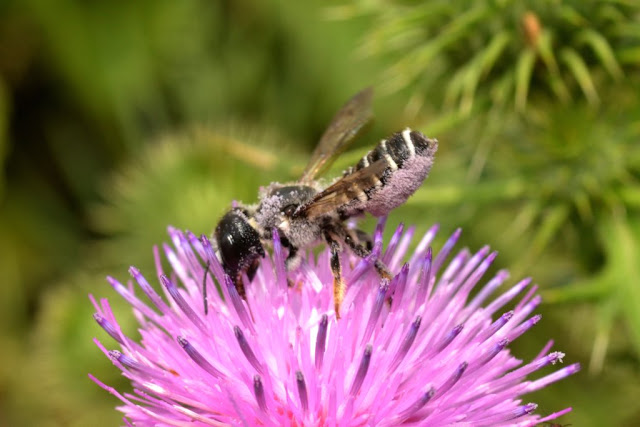 I suspect the reason for her comical position is... she doesn't want to accidentally brush off any of that precious purple pollen. 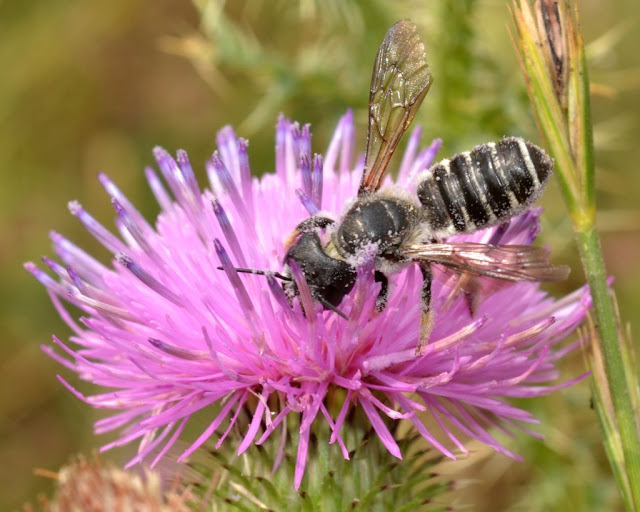 Presently, a leafcutter bee is making a nest in a small hole in the edge of a piece of plywood shelf in my shop.  The bee is rather elusive, so I haven't snapped any pictures of it...  it is so quick at approaching and disappearing down its hole as it brings supplies to its nest.  Oh well, at least we can envision what its doing in there, as well as picture its signature leaf-holes somewhere out in the fencerow.
If we would have some solitary bee nesting tubes mounted in a bee house

in our backyard, I reckon it would be easier to observe and photograph these interesting bees.
Posted by Dana at 7/31/2012