Something's in the air! Part II

Something is calling these little yellow ants out of their underground nest.
What signals are these ants detecting?  It sure looks like they hear, smell, or feel something... something big! 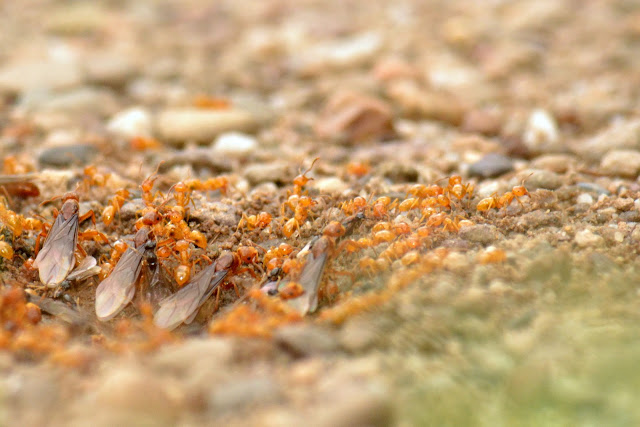 What a sight to see... these swarms of ants clustered around their holes, all facing outwards with antennae waving... it really looks as if a war is going to break out.
No, it's not a battle formation, but rather, an assemblage in preparation for the "flight of the queens".  These pictures show the beginning of a mating flight of a Citronella Ant colony.  This is when crowds of queens and males leave the ant nest and fly away to start new colonies. 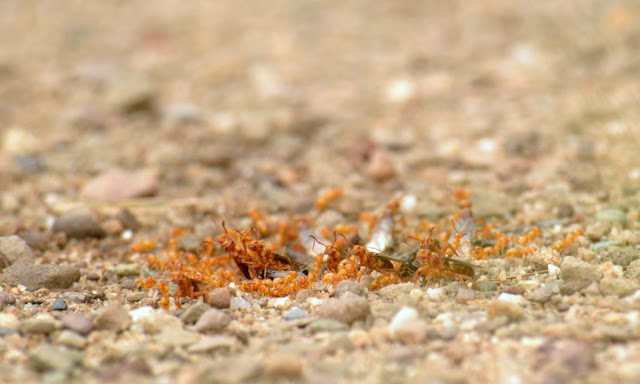 From the appearance of the ants, I can't decide if they are waiting for a signal... something blowing in the wind, or, are they are so used to their dark, underground habitat that they are very timidly approaching the bright world above ground. 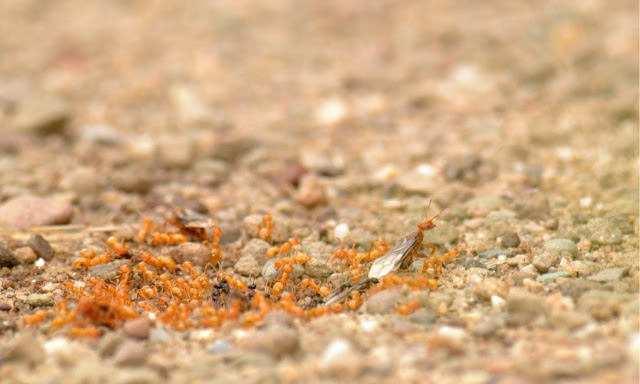 As I mentioned in my previous post, these citronella ants are subterranean farmers... farming aphids and mealybugs down there in their hidden world.  Here is a photo of a tiny yellow ant sipping a droplet of honeydew from one of its "cows". 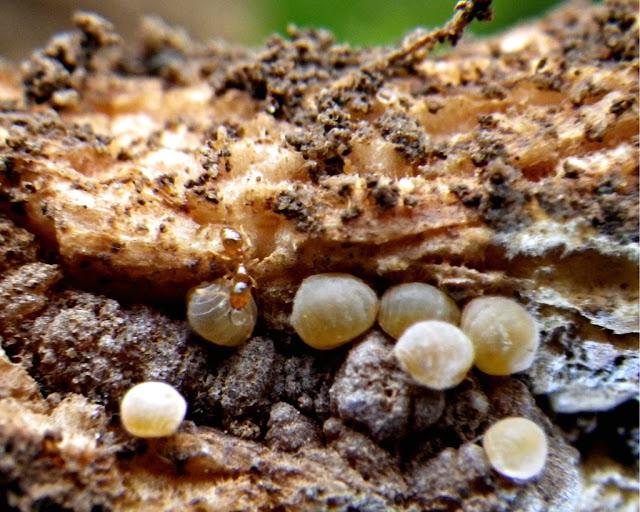 I suspect the citronella ants left their "cows" out to pasture during this momentous occasion.
Whatever triggers the swarming of these yellow ants, it's a yearly thing for them to send off their winged ants to start other new ant colonies. 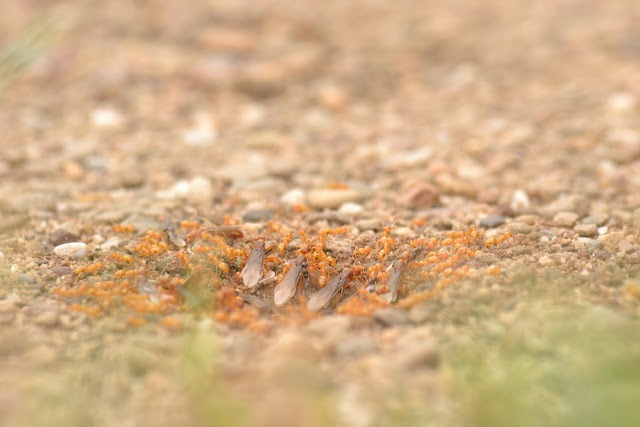 The first noticeable part of their nupital flights are the cavernous holes (at the scale of these tiny ants) into the ant nests that show up in the yard.  I presume these are probably excavated for the occasion of this yearly sending-out party. 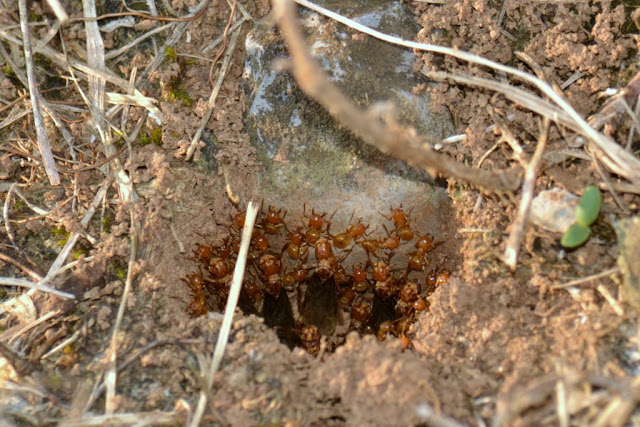 I've noticed these holes, with their attendant ant horde, in the afternoons and early evenings.  The little yellow ant workers gather around the entrance like guards with the winged ants waiting in the wing... waiting for something. 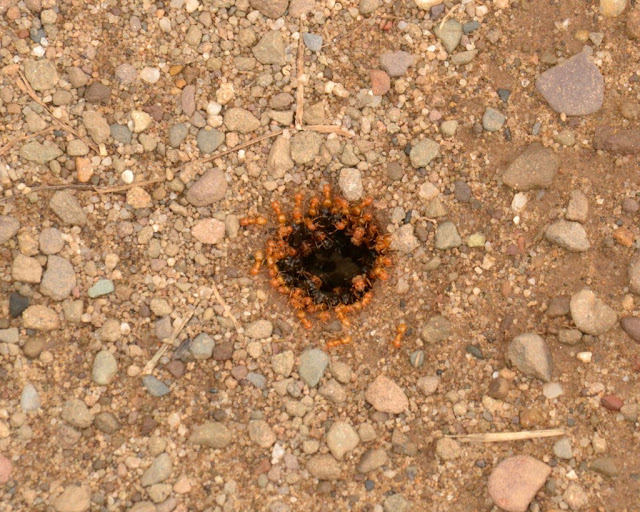 Soon, with seemingly much trepidation, the winged ants start to emerge from the nest.  The ant queens don't leave right away... some just show up and play the waiting game with the workers.
Notice that some kind of communication is happening among all those ants. 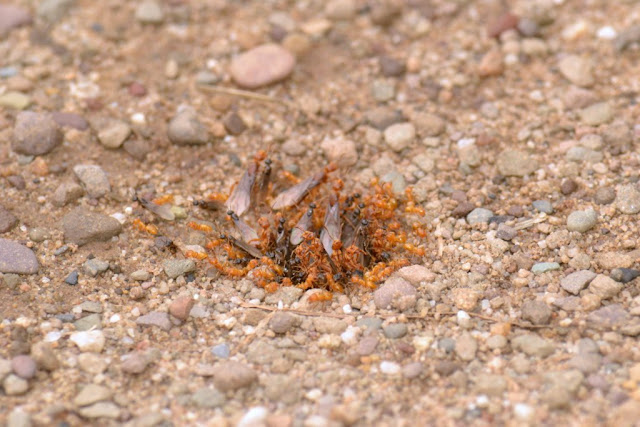 Each ant must know what part it plays in this huge undertaking, but I haven't totally figured out what their individual jobs are...  except maybe the ant on the pebble in the foreground (below).  It was playing "king of the mountain" for a while. 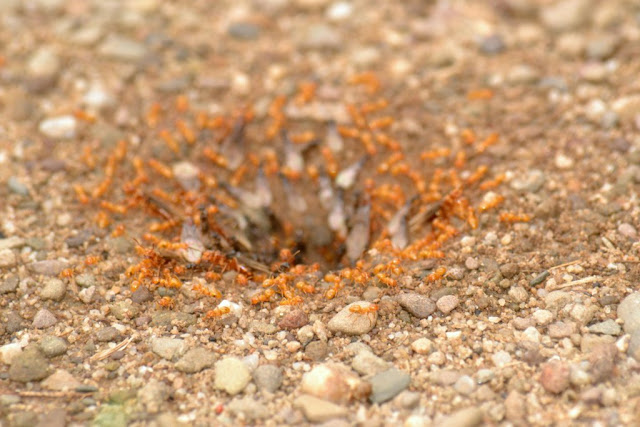 During this waiting stage of the "flight of the queens" there seems to be alot of kissing up, along with much grooming.  Then, there are all the farewells.  Perhaps there are encouraging words like, "You go girl!" and, "Go for it!".  At least, that's what I get from the picture below.  Oh, of course there are the pre-flight checks. 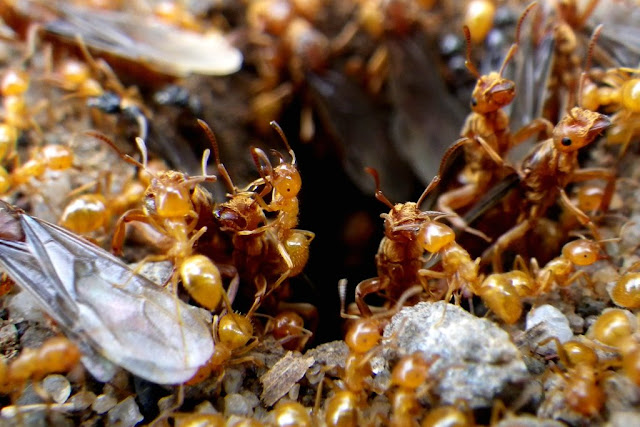 Eventually the signal they were waiting for arrived... I didn't hear it or smell it.  Towards evening, at some signal (or mob mood) they pour forth.... 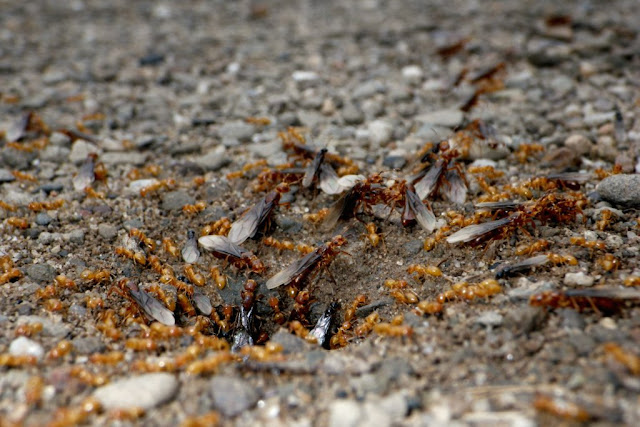 and the flight of the queens (and males) begins! 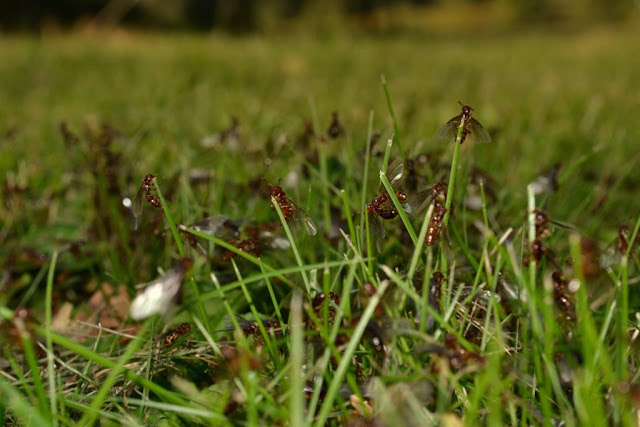 The place is all a frenzied flutter. 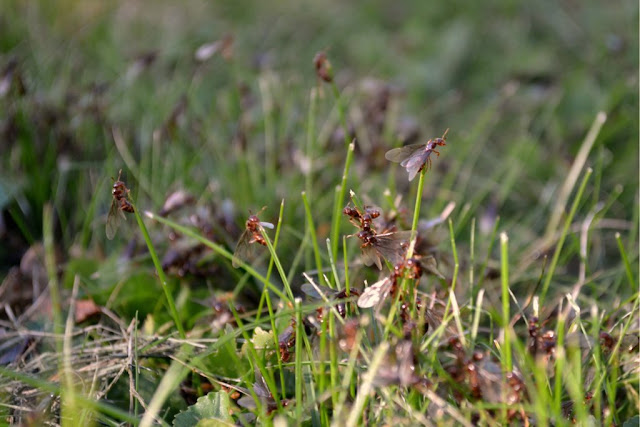 Patches of ground are busy with activity. The air is littered with the new flyers... the young ants with wings, and also filled with the smell of citronella.  The citronella smell could be from ants I inadvertently stepped on. 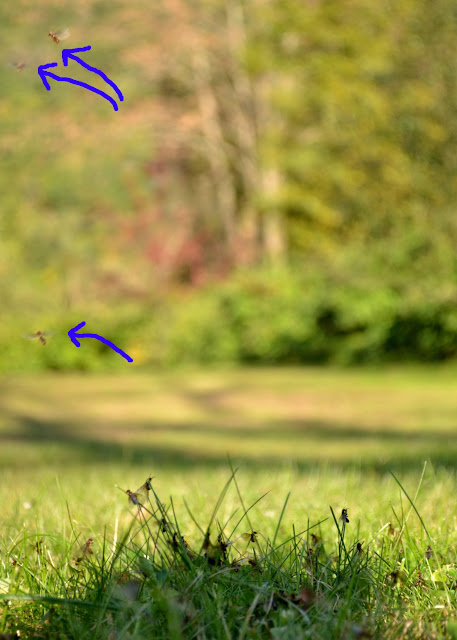 Yes, something's in the air: flying ants and their signals. 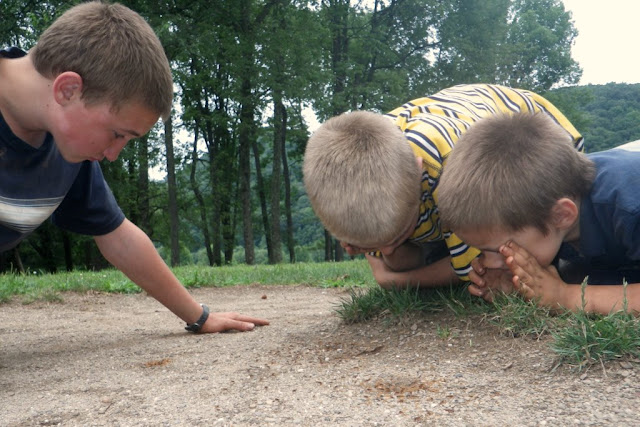 Incidentally, these boys aren't sluggards, but there is still wisdom to be had by considering the ways of the ant.  In the context of this event, I suppose one thing they could learn is... that there is a right time to leave home and start a new one (I might add "Hopefully, not far away").
BTW, this "flight of the queens" took place in the same sand volleyball court where I took some pictures of ground-nesting solitary wasps with their nests and prey.
Posted by Dana at 7/25/2012