This summer the Black-and-yellow Mud Dauber Wasps have found a nice supply of mud for nest building... on our river bank... down where the dirt meets the water's edge. 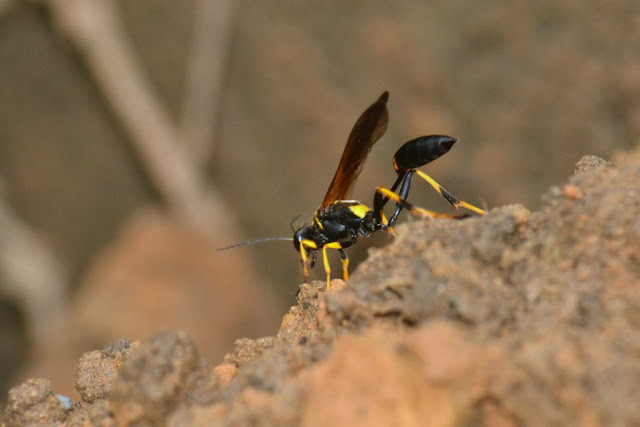 We've been entertained by these busy mud dauber wasps as they made little mud balls and air-lifted them away to some local buildings to build their mud nests.  A Black-and-Yellow Mud Dauber Wasp's mud nest is a work of art, even though it looks like a lump of mud someone threw up against a wall.  Later in this post I have some photos of a mud dauber wasp nest in its beginning stages.  But first, here are some pictures of the mud wasps gathering mud. 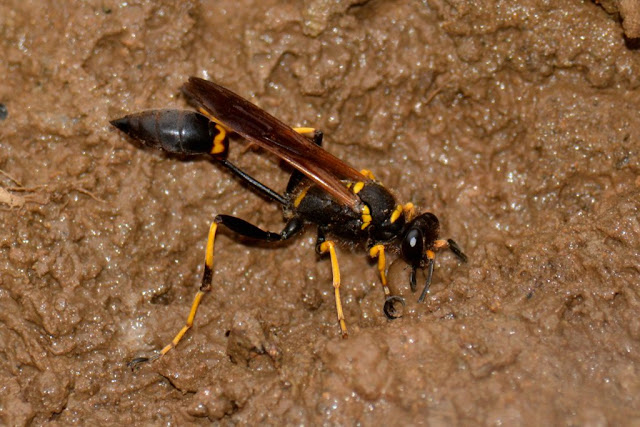 All the splashing from our swimming in the river, as well as the waves from passing motor boats, has provided the mud wasps with the perfect source of mud for their "quarrying".  The area where the mud wasps have been gathering mud has been a busy place the last few weeks.


Process of a mud dauber wasp making a mud ball.

These black wasps with yellow legs and markings are a striking sight as they roam the muddy areas hunting for locations with just the right moisture content and consistency to build their mud nests. 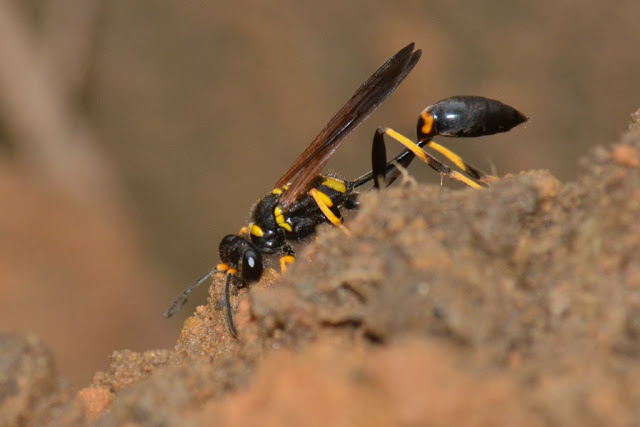 They seem to prefer rather moist mud... I suspect this allows them to spread, or apply, the mud-like plaster as they construct the spider storehouses for their larvae. 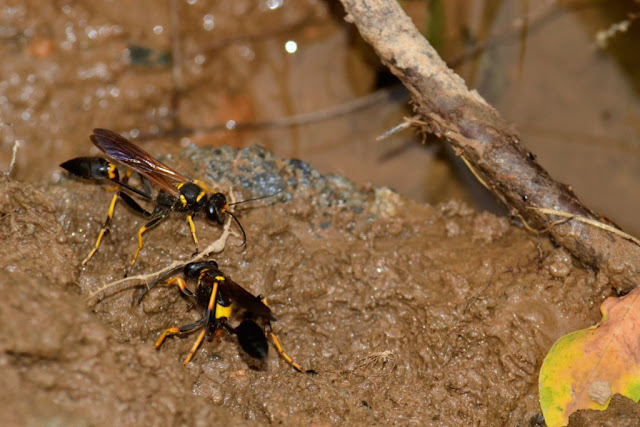 Once the mud dauber wasp finds mud to her liking, she, and other wasps will visit the spot time and again collecting mud. All those markings in the mud around the wasps in these photos are the result of the mud gathering activities of the many mud dauber wasps that were using this locality for gathering mud. 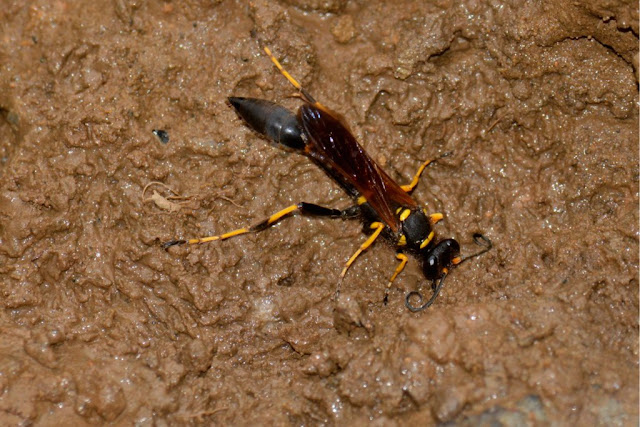 In order to utilize the mud, the wasp rolls up a pea-sized ball of mud with her jaws. 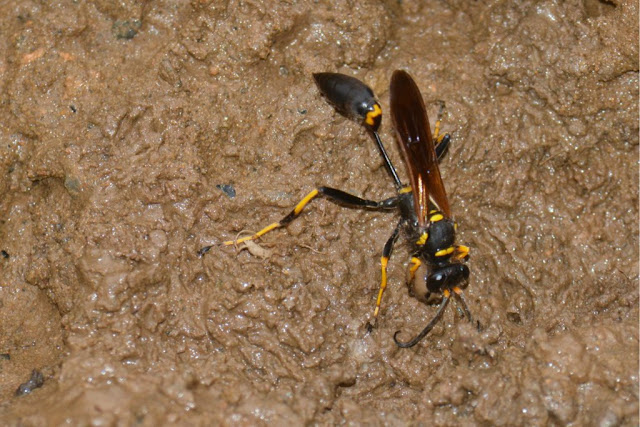 When the little lump of mud is of sufficient size, it is carried away between the wasp's jaws and front pair of legs. 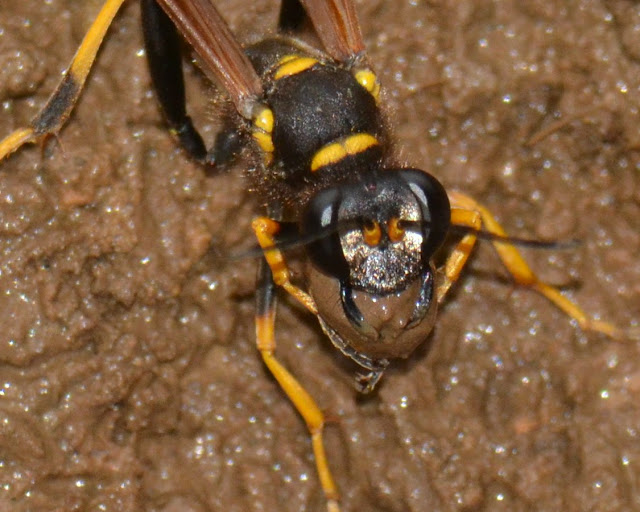 Here is a photo of a wasp as she holds a mud ball... right as she begins to take flight... headed for her nest. 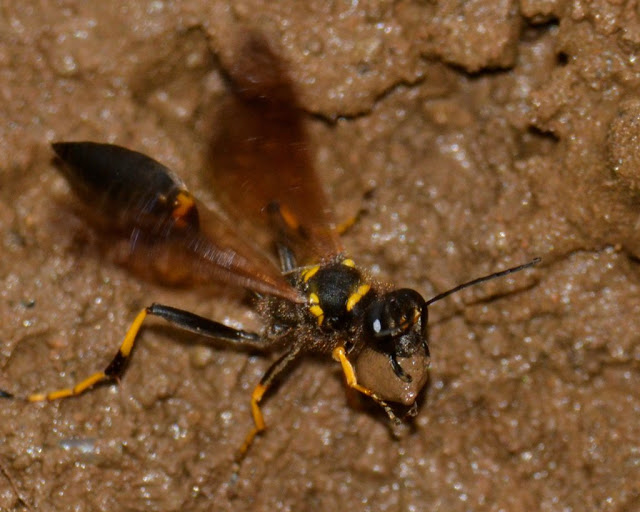 We followed the flying wasps on several occasions (by charging across the yard)...  in hopes of finding where they were building their nests. 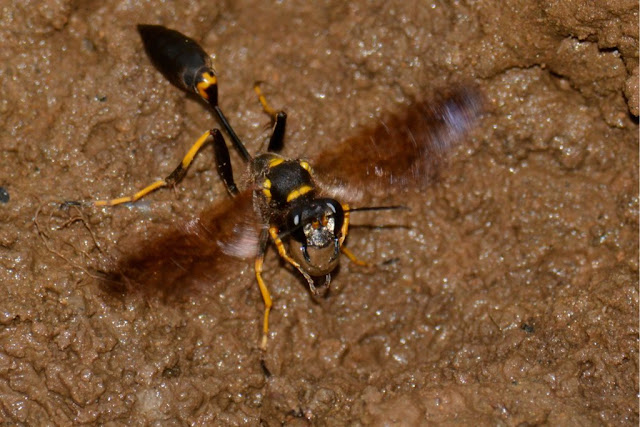 Little mud balls... what an ingenious way to transport the mud for building a nest.

When the Black-and-Yellow Mud Dauber Wasp builds a nest it fashions a number of cylindrical mud tubes, each about the size of a AAA battery.  Several tubes are placed parallel with each other in a row.  A second row of tubes may even be stacked on top of first row. Each one of those mud tubes, or cells, is stuffed with paralyzed spiders.  Also, each finished cell contains a mud wasp egg.  When a wasp larva hatches, it feeds on the helpless spiders contained in its cell. 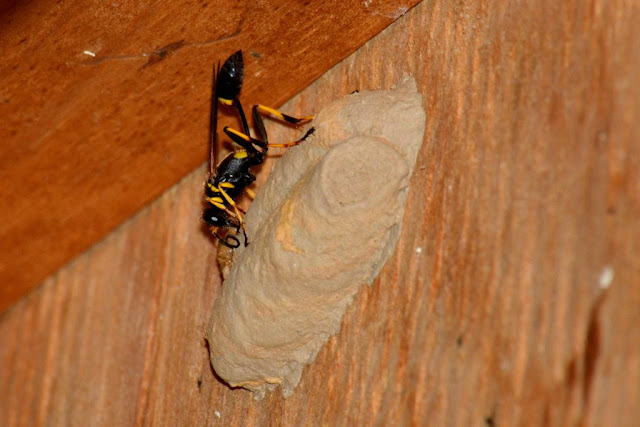 In the photo below, the wasp is applying some fresh mud to the mud nest.  She makes a buzzing sound as she applies the plaster-like nest construction material.  I assume her buzzing causes vibrations that consolidates (settles or compacts) the mud and makes the nest stronger. 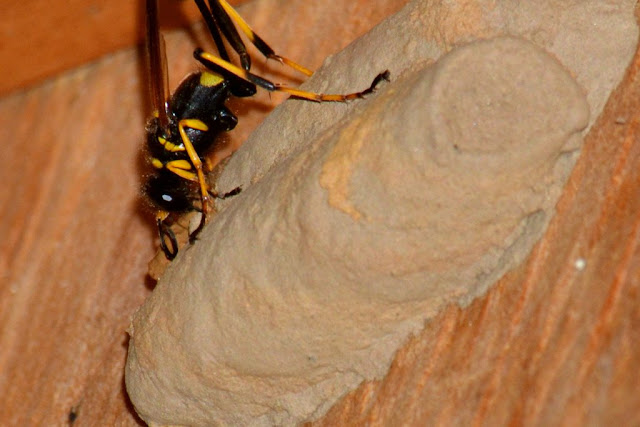 In the photo below, a freshly constructed mud tube remains open on one end as the mud wasp is most likely out hunting spiders to sting and place inside the nest before sealing the cell. 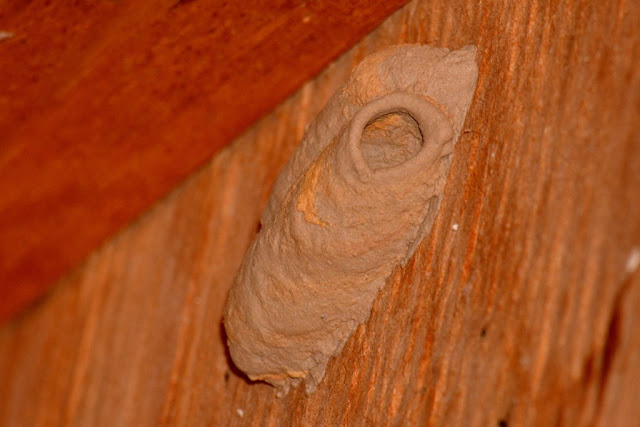 When each cell is provisioned with enough spiders, an egg is laid in the cell.  Then the opening is sealed as shown in the photo below.  After finishing a cell, the wasp occupies herself for awhile with spreading a "blanket" of mud over the cells, or tubes, of her nest.  This blanket conceals the individual cells and will eventually have the look of a nondescript clod of mud. 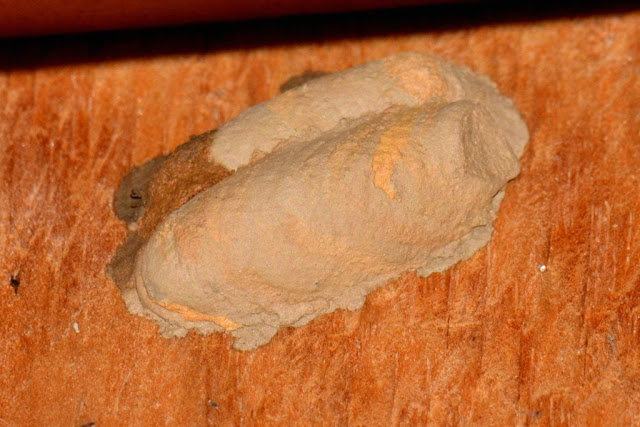 Two days later, another mud cell has been built, filled with food stores, an egg deposited inside, and the cell sealed with a mud plug.  She's a busy "bee"!.  Notice how the two older mud tubes are beginning to disappear under the "mud blanket".  That blanket of mud will soon cover the whole nest and cause the nest to look just like a clump of mud stuck to the wall. 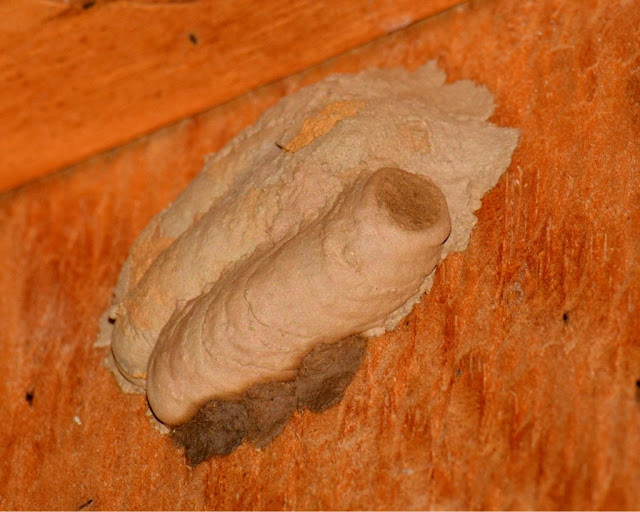 I wonder how many cells the wasp will place in her mud nest?  How many spiders will it contain?
We plan to watch as the nest progresses. I plan to take pictures as the wasp's artwork advances. 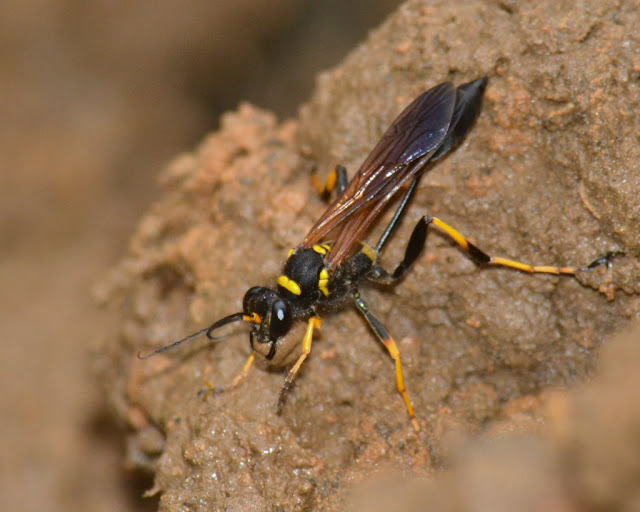 In a future post (Mud Dauber Wasp Nest, Part II), I expect to show pictures of the mud wasp's nest as it develops and is completed. I also plan to post more about nest's contents.  In the meantime, here is a link to another post with photos of Black-and-yellow Mud Dauber wasp gathering mud.  Also, here is a link to an earlier post I did about a Black-and-yellow Mud Dauber Wasp nest and its spider contents.
Posted by Dana at 8/10/2012