I walked past the Lilacs and was promptly surrounded by half-a-dozen buzzing, threatening hornets that looked like giant yellowjackets. 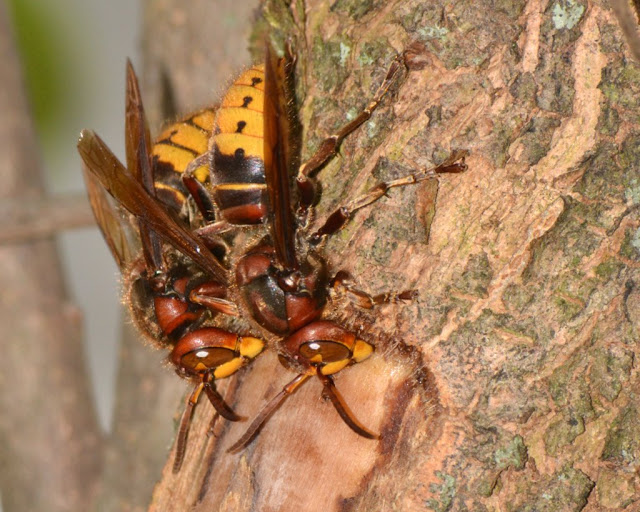 We found ourselves neighbors to a great number of these black and yellow hornets when we were visiting in southern Pa. last weekend.  I've never seen so many of these European Hornets in one place.   I suspect the hornets were plentiful in the row of Lilac bushes for two reasons... First, I'm fairly certain they had a nest nearby in a hollow part of an old Popular Tree. Secondly, the sap of the Lilacs is a major food source for them.
These European Hornets are bright yellow with black markings, so over all, they resemble yellowjackets even with the reddish markings behind their eyes and around their wings.  The most outstanding visual difference between these hornets and yellowjackets is their size. 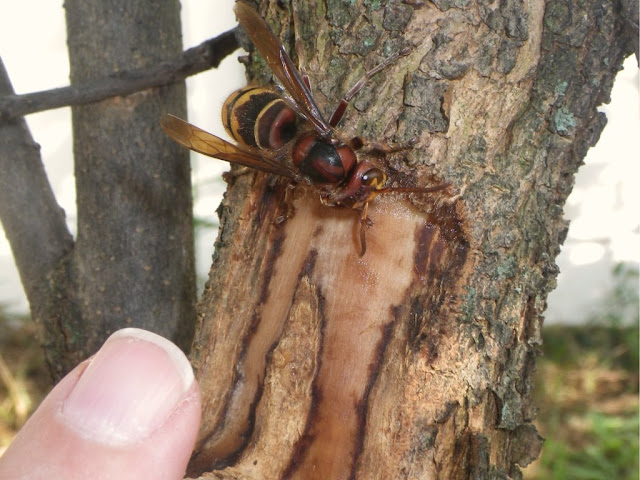 I wanted a photo that showed the size of these hornets so in order to get one to stay put on my finger I offered the hornet some honey.  Well, it wasn't impressed with the honey and I almost got stung. 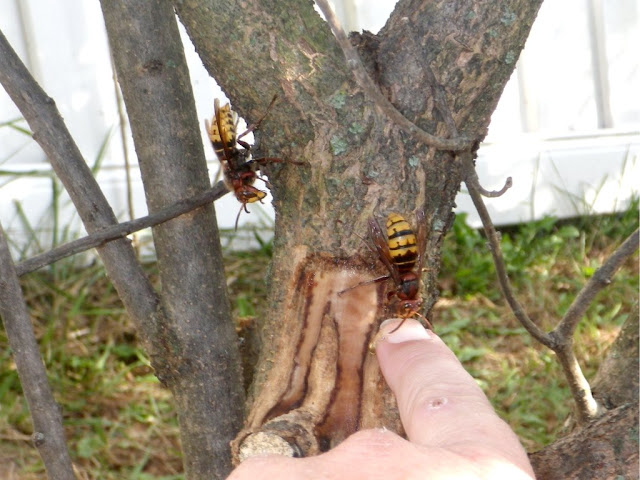 After that close call, I decided to take the safer route while trying to show the size of these large hornets, as you can see from the photo below. 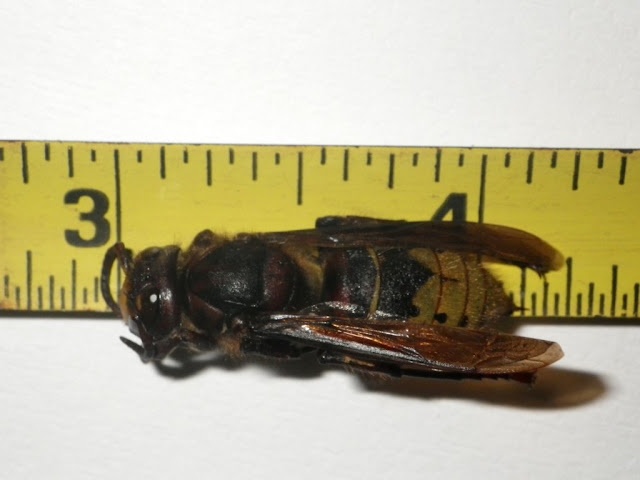 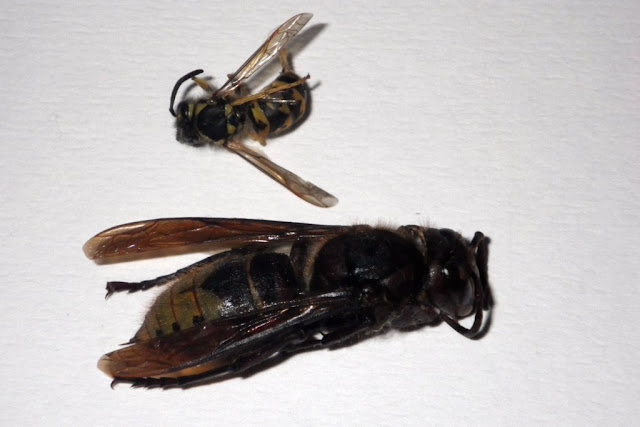 One notable thing about the European Hornets is their affinity for Lilac sap.  It's fascinating to watch these giant hornets chew away the Lilac's bark and feed on the leaking sap. 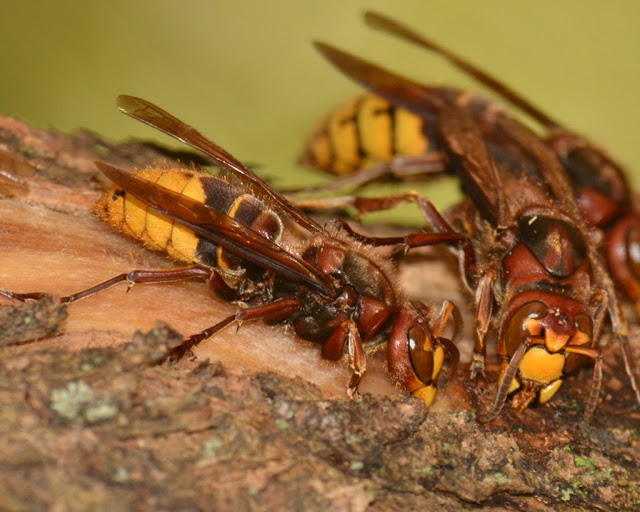 The hornets were busy removing patches of bark from branches in the top of the bushes all the way down to the main stem. 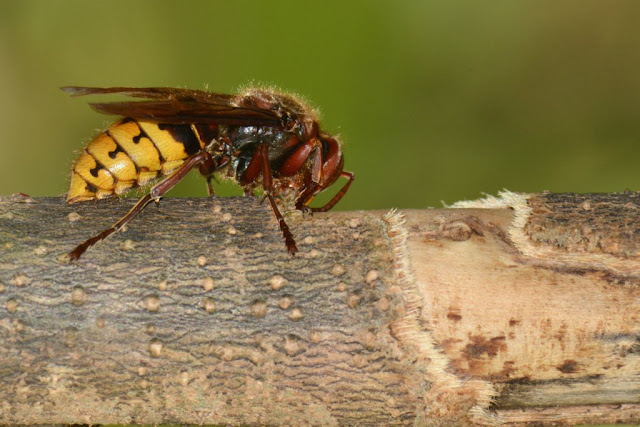 All that chewing can really do some damage.  Especially if the hornets happen to chew on the bark all the way around, girdling the branch.  That would kill the branch beyond that spot. 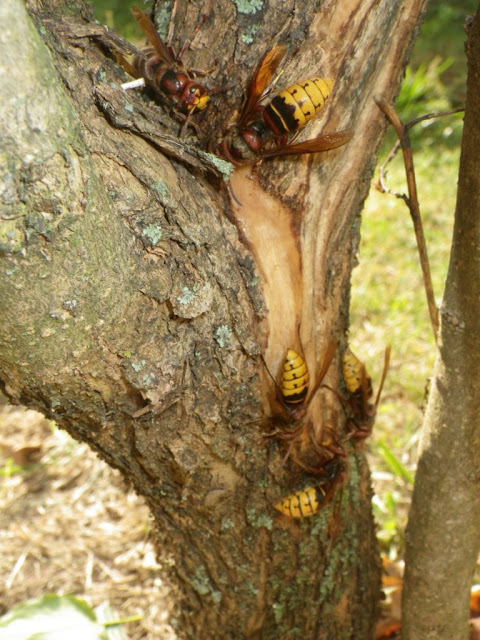 European Hornets were introduced to North America way back in the 1800's so they are nothing new. However, I've never been entertained by them like I was last weekend.  I've mostly seen lone ones patrolling here and there. 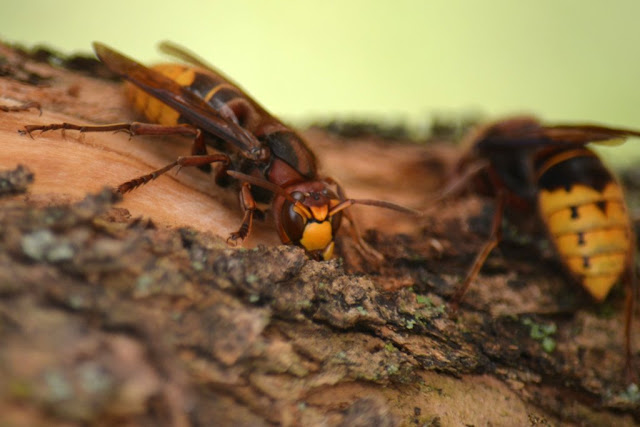 Back when I was young, there must not have been a nest of these hornets close to the Lilac bush along the barbed wire fence at Grandma's house... or I could probably tell you what their sting is like.
Posted by Dana at 9/21/2012