A Black-and-yellow Mud Dauber Wasp has just showed up at our shed, headed for her nest, with a spider she captured.  Wouldn't it be fun to watch this wasp as she attacks a spider? 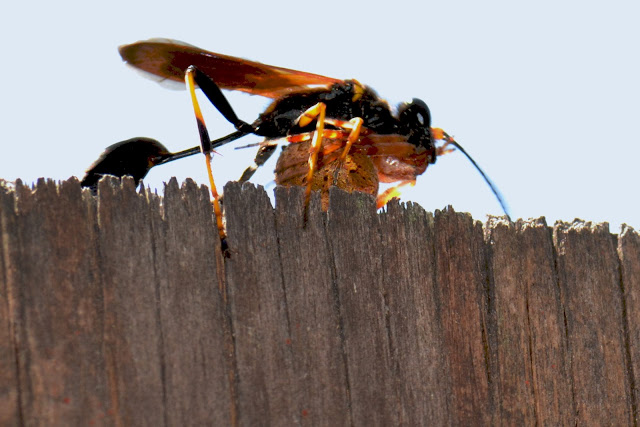 Let's follow this mud wasp as she goes spider hunting.
The mud wasp heads for the corners in the rafters of our porch where she approaches some spider webbing, busily waving her antennae. 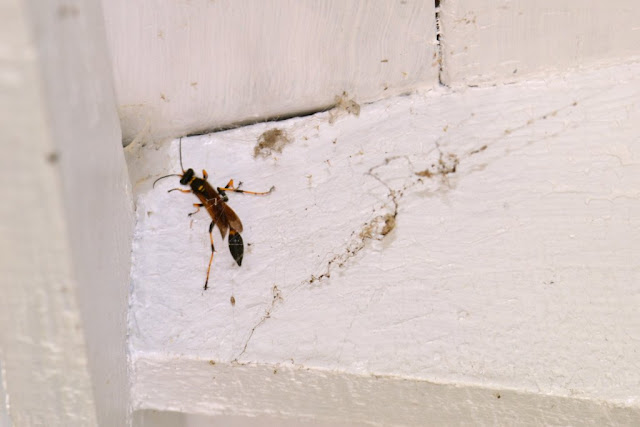 She excitedly tears away at the spider's silk retreat to get to the hidden spider. 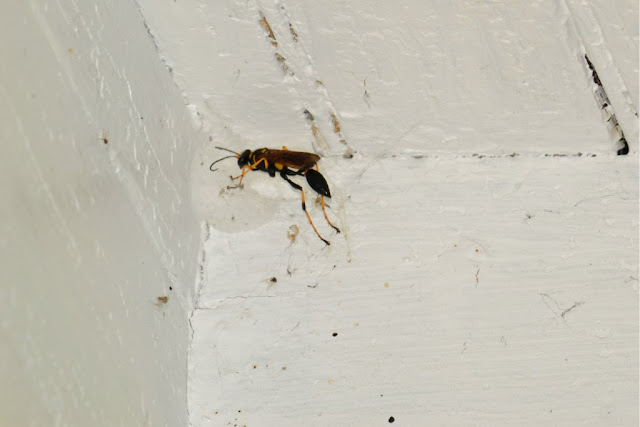 When she finds a spider, she grasps it with her jaws and brings the tip of her long abdomen around to deliver a paralyzing sting. 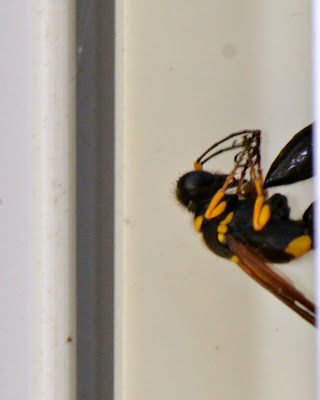 The photos below show the mud wasp attacking a spider that was hiding in a silken retreat in a window jam.  Here, she rapidly tears through the spider silk to reach the spider. 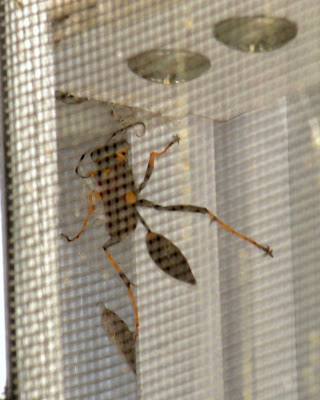 Then, quick as a flash, she drags the spider out of hiding and delivers that paralyzing sting. 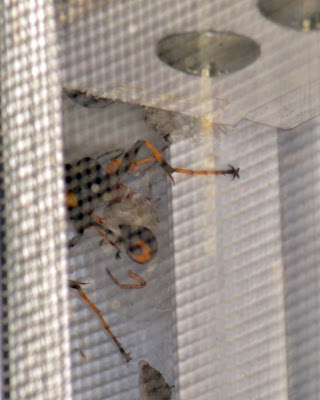 In fact, it appears that she repeatedly stings the spider. 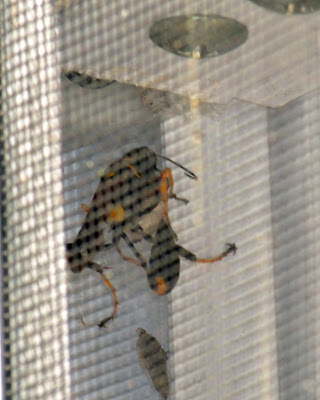 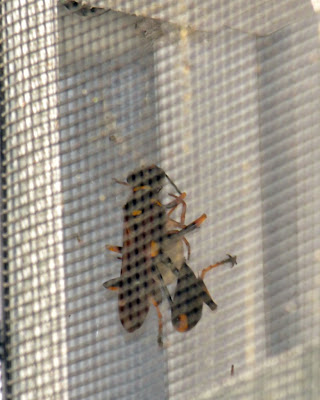 After arranging the spider upside down and head first (with its legs held neatly back), she grasps it with her jaws and forelegs, and then flies back to her mud nest. 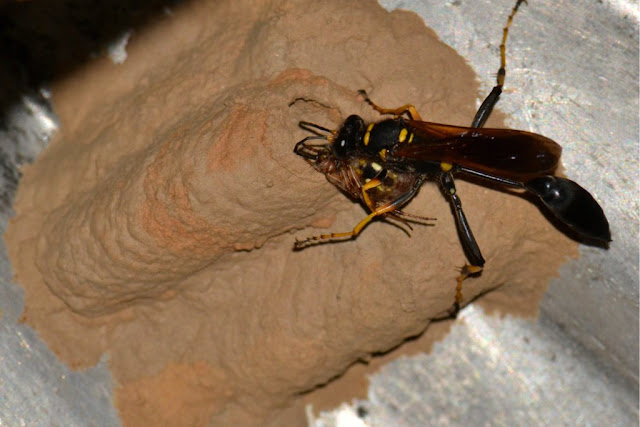 Then the wasp pushes the helpless spider into the mud tube, or cell, she has fashioned for her offspring. 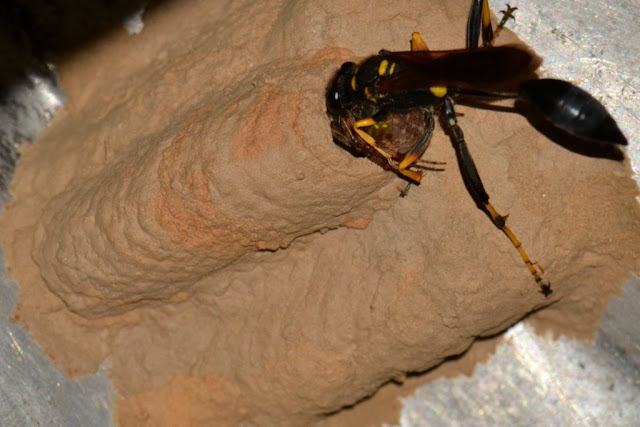 By the way, this particular mud wasp nest is across the shed from the one I've been following in this series of posts on Black-and-yellow Mud Dauber Wasp. 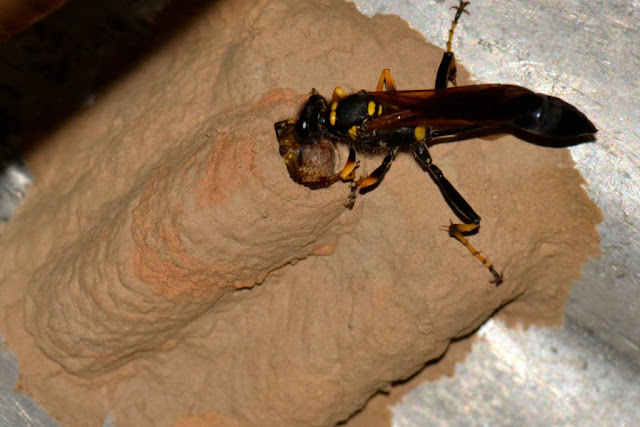 When the spider is stuffed into the cell... 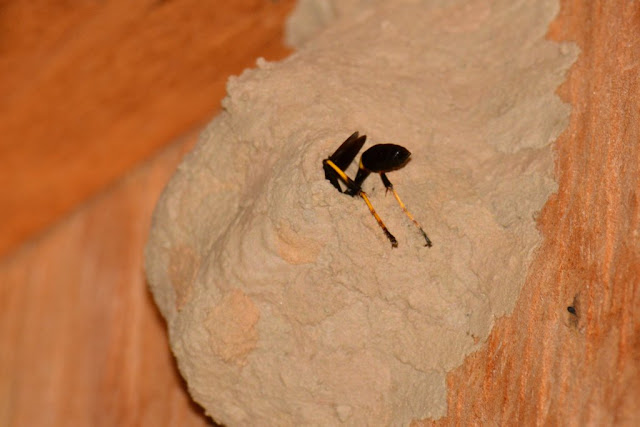 and there are plenty of other spiders placed in cell - enough to feed a growing wasp grub - she seals the cell and applies a finishing coat of mud over the nest. 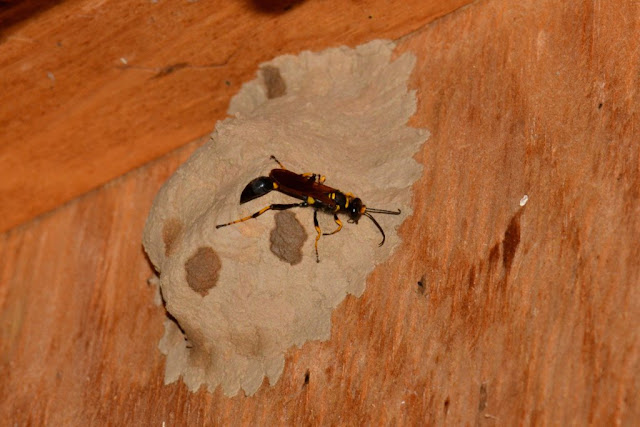 There! She's done!  Now she'll just fade away.  Her grubs can feed on those many spiders she provided.

Next summer, if all goes well inside those lumps of mud in my shed, many wasps will emerge to do this all over again.  See Mud Dauber  Wasp Nest, Part I
Posted by Dana at 10/08/2012