Tracking a Fisher isn't something I was able to do when I was young.  These wild creatures weren't around Pennsylvania at that time. 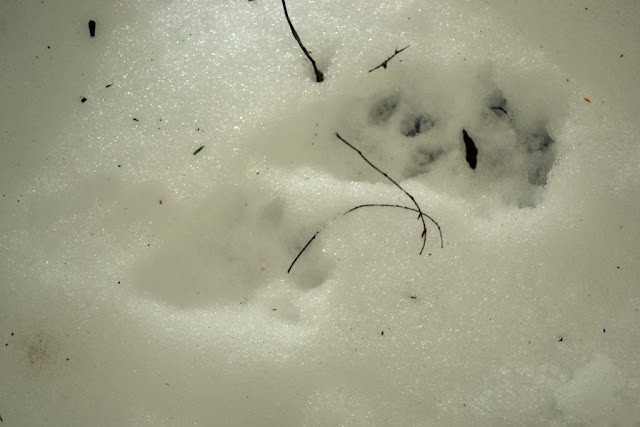 Fishers were expatriated here in Pennsylvania over one hundred years ago, but they were reintroduced in the mid 1990's.  We are pleased that the Fishers are re-established.  When we found these Fisher tracks in the snow, it's no wonder that we followed them for awhile through this rugged, wild country.  We tracked the Fisher along some rock ledges near a ridgetop that is forested with a mixed conifer/deciduous forest. 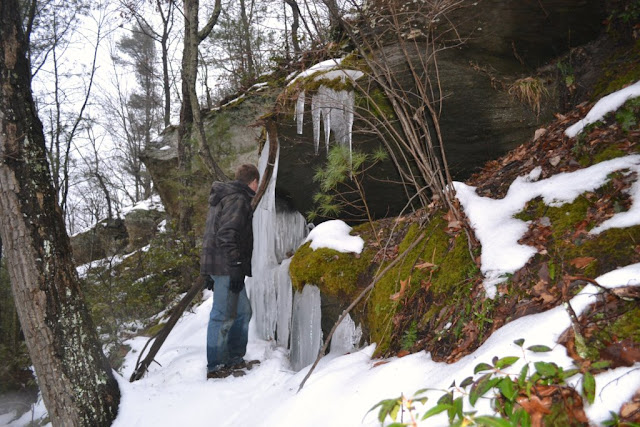 There were porcupine dens in some of the rock crevices.  We were hoping to find evidence that the Fisher was successful in hunting the porcupines.  Unfortunately, we didn't see the Fisher or any sign that it had a successful hunt. 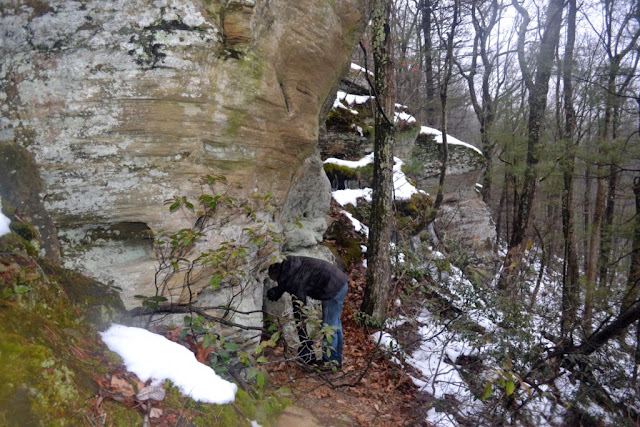 We did, however, find some Fisher tracks in the sand under a rock ledge.  Exclamation point. 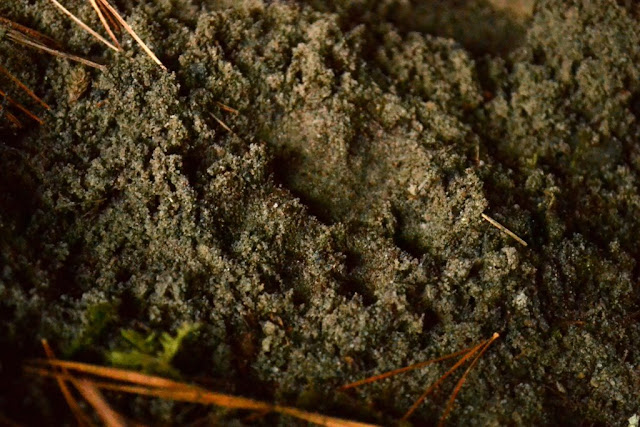 The Fisher's footprint in this photo is about 2 1/2 inches across.  This is a front paw print.  Note the five distinct toe/claw marks.
In the next photo my son is pointing to the Fisher's paw print that was under the rock ledge.  We could easily imagine the Fisher searching for prey among the many ledges, holes, and crevices along this sandstone outcrop. 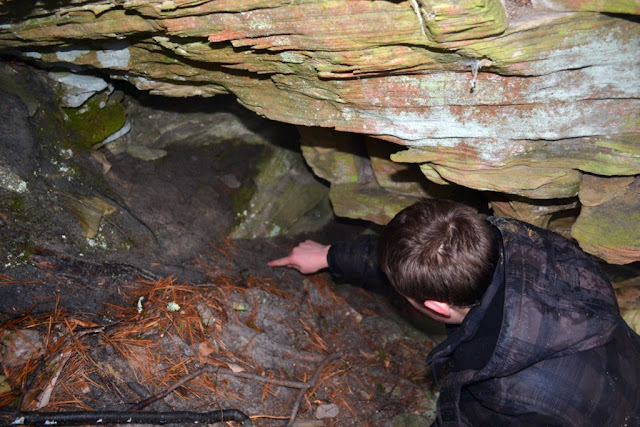 We have had a stretch of mild, mid-January weather that allowed this sandy soil to thaw.  This allowed us to see these tracks in the sand, but it also quickly melted the ones in the snow. 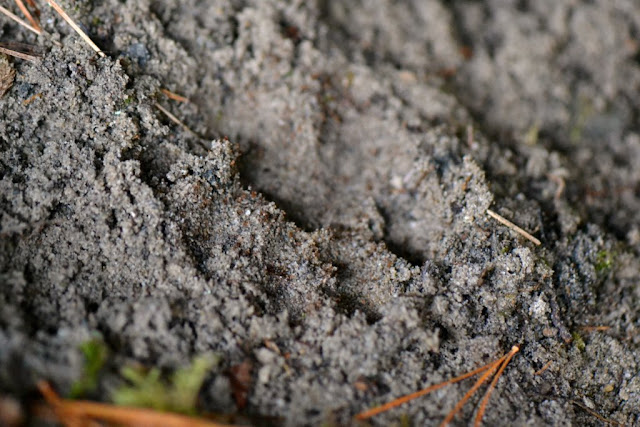 The carnivore's tracks were just around the corner from a porcupine den. 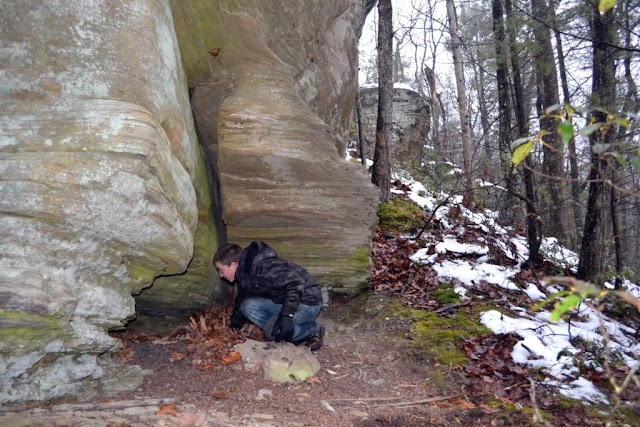 Here my son is peering into the porcupine's den. 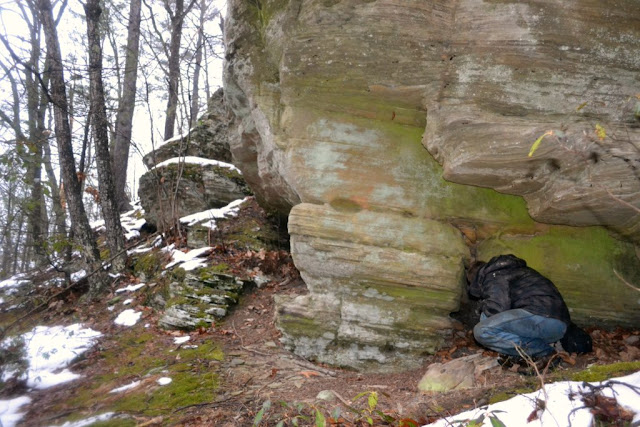 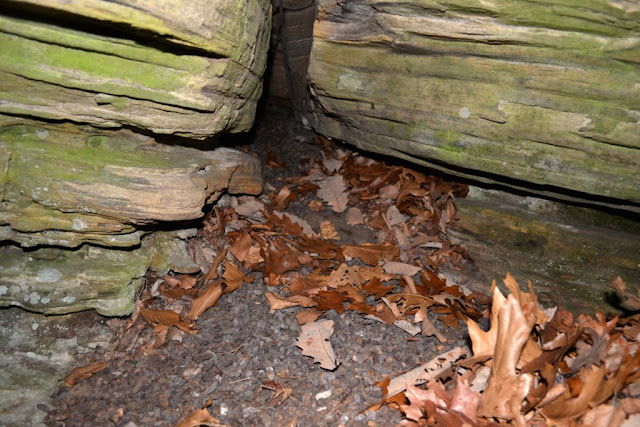 This den was occupied... as you can see from the ball of quills in the back of the den 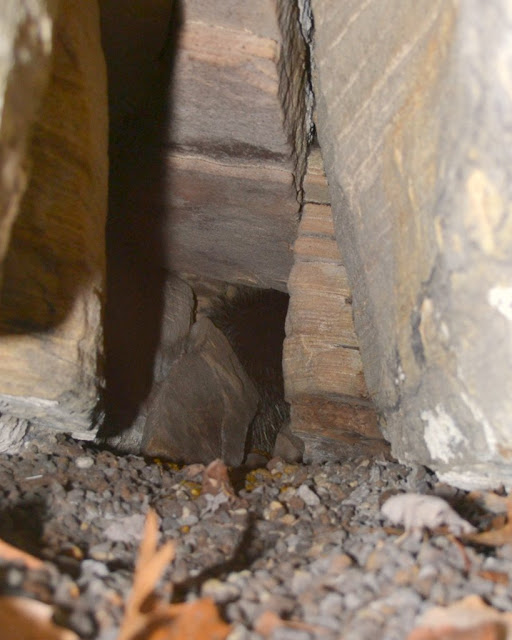 The Fisher didn't get this porcupine... yet... oh, we expect he'll be back.  Besides, there seems to be plenty of squirrels and other animals utilizing the rock ledges as well. 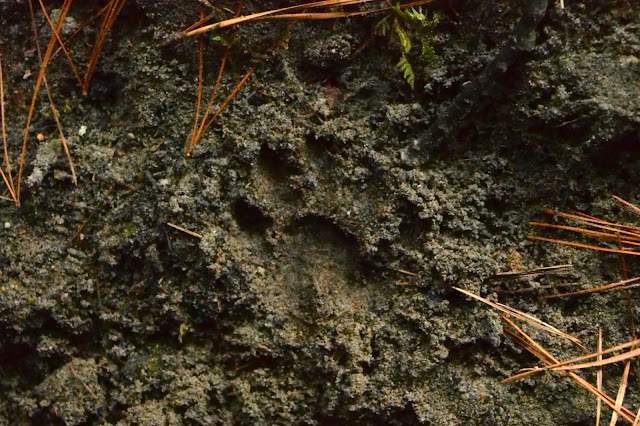 Near the rock ledges the fisher also explored windfalls and snags.  Here in this photo my son is looking at some tracks that approach the tree stump from the left.  Those tracks looked older than the ones leaving the tree on the right.  We surmise that the Fisher may have spent some time resting up there on the top of the snag.   For all we know, the fisher may have fled with our approach. 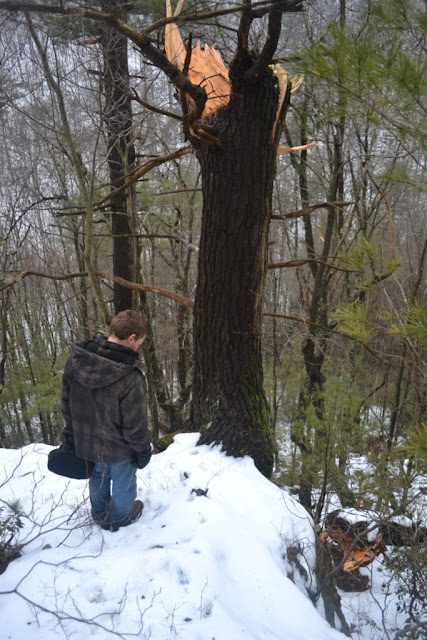 Why don't we leave the Fisher here for now?  I'll post more about tracking the Fisher through the woods in my next post.
Posted by Dana at 1/14/2013