Freshwater snails populate the boiling-sand spring that I've been posting about recently.  As the snails graze on the biofilms growing on the spring's substrate, they perform some antics that we've enjoyed watching. 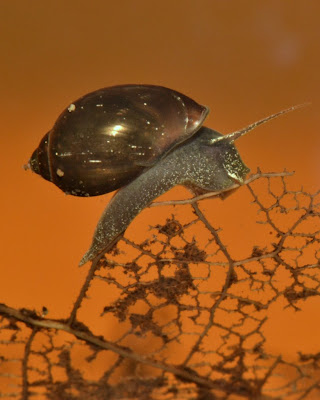 One thing we've seen is the snails taking turns in a "rock tumbler".  In the photo below, two snails (in the upper left) are crawling on the edge of a sand-boil, while the two snails (near the center of the photo) are tumbling repeatedly in one of the turbulent micro-volcanos of sand.  Perhaps the snails were accidentally entrained in the surging fountain of sand, or perhaps they did it for fun like the scuds that seem to enjoy surfing in the sand-boils.. 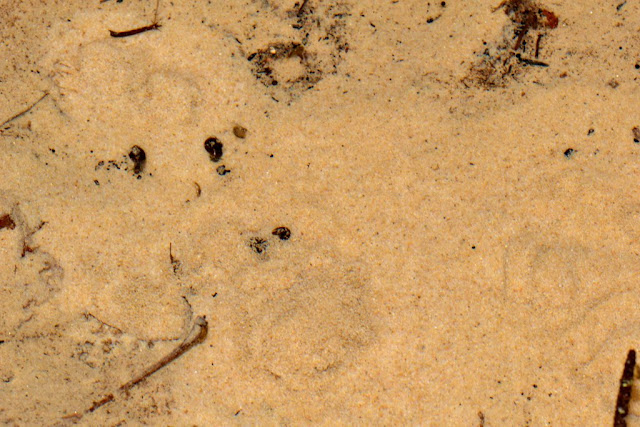 Your author has also engaged in some antics at the spring in order to capture some of these photos of aquatic life... one such antic was kneeling in the spring on a mid-winter day. 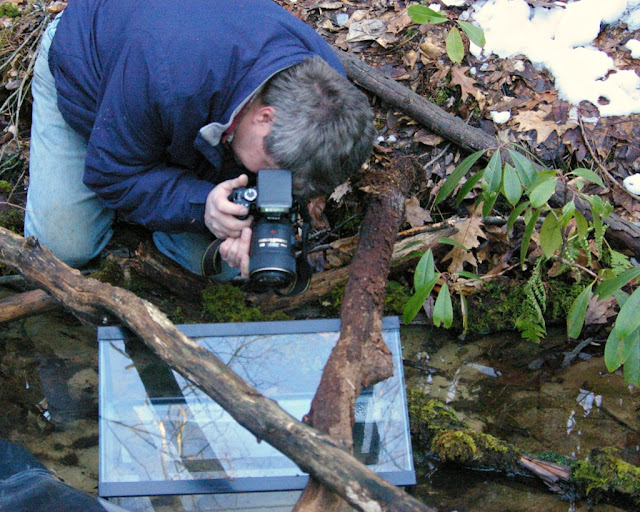 Another was weighting down an aquarium to provide a window into the underwater world without the glare. The "sunken window" allowed me to place my Nikon underwater for some macro photos of freshwater aquatic life. 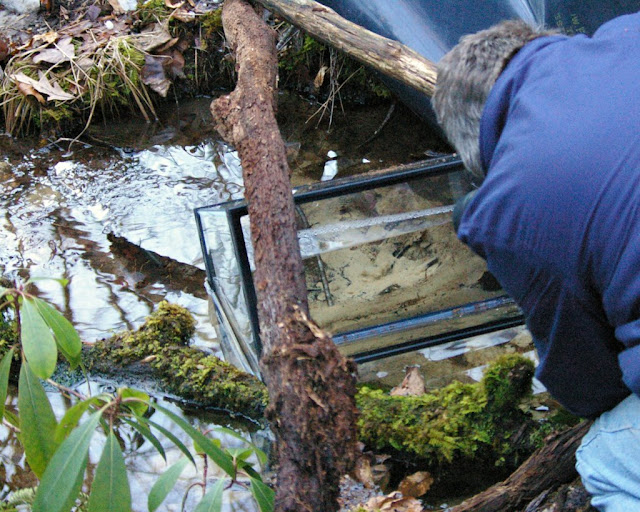 I also took some pictures of the spring's aquatic life by putting some of the stream substrate into the aquarium for observation.
Here is a photo of an aquatic snail grazing on algae that has colonized the aquarium glass. 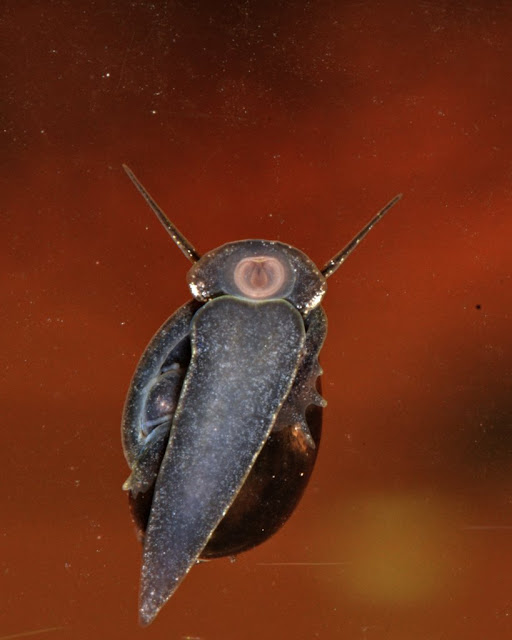 Here is a view into a snail's mouth as it feeds on algae.  We could see the snail's radula as it scraped away against the glass.  The radula is the horseshoe-shaped whitish area.  If you look closely you can see many lines like teeth on a file.  These lines on the radula are rows of many minute teeth which act as a rake, or rasp, to loosen particles of food material. 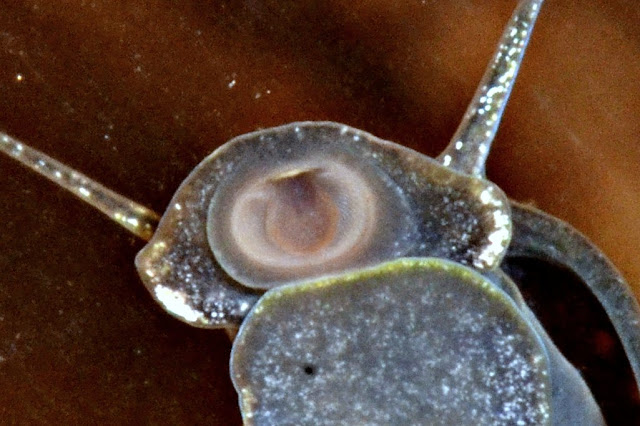 When I snapped this photo of a grazing snail, it was approaching a resting cyclops...coincidentally,  this made the snail look as if it is going to swallow the unsuspecting cyclops. 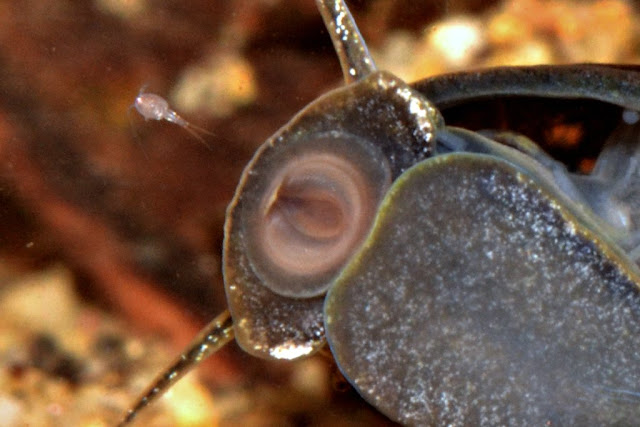 Another antic of the snails is crawling upside down under the underside of the surface-film of the water as they feed on floating algae. 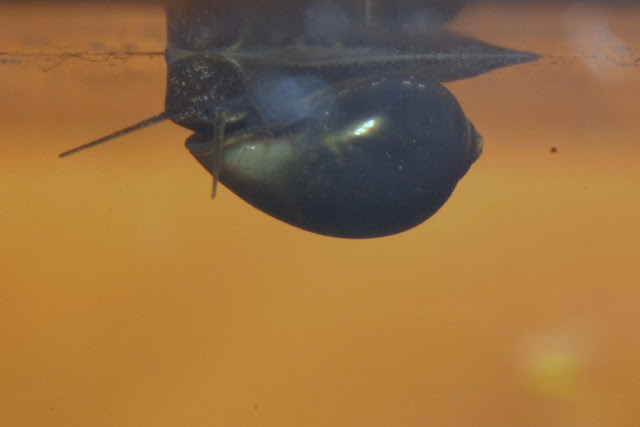 Another spectacle we have seen is the snails performing a slow, gracefully glide down through the water to reach the bottom.  The snails appear to be "diving" at a blissfully slow rate, when actually they are descending at a snail's pace on a thin line of slime. 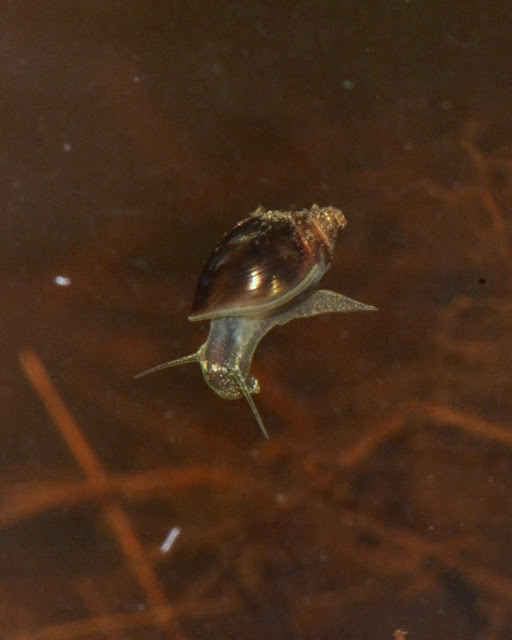 Although the slime line is hard to see, I've demonstrated its presence by gently reaching into the water and towing the snails around by their invisible "rope". 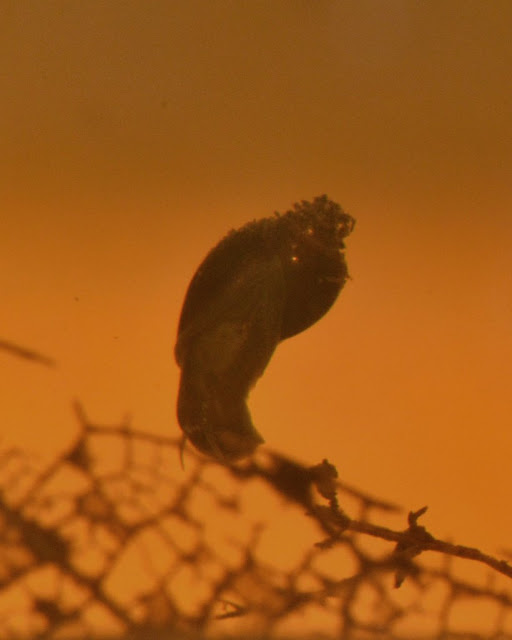 In the photo below, the rope of slime is barely visible down the center of the picture... it looks like a thin strand of spider silk.  In this instance the slime line was preexisting for it continues below the descending snail. 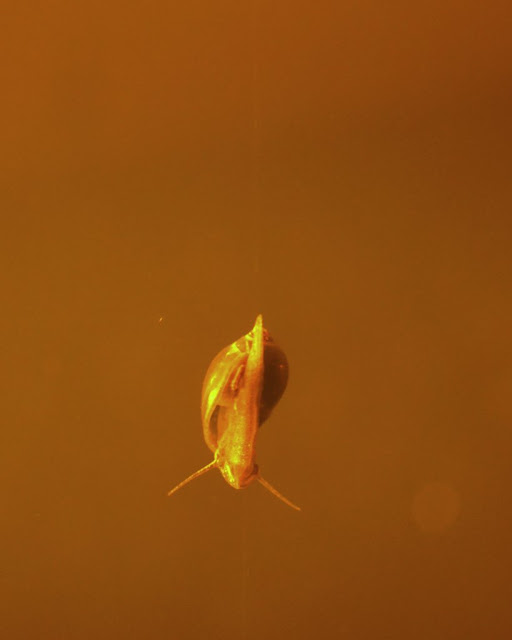 Here is a photo of a snail ascending a slime rope.  The line isn't visible but its effects are... see the depression on the water's surface from the pull of the snail's weight on the line? 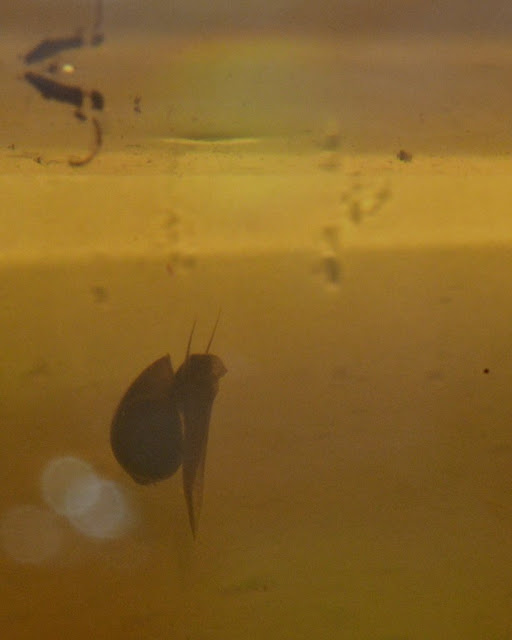 That's all I have about the snails... for now. 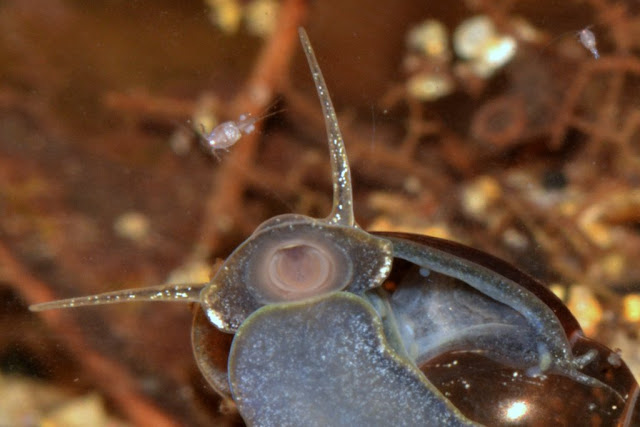 Our sand-spring still has plenty of interesting aquatic life to post about... like that cyclops that has its eye on me.  I may need other equipment for those small things ... equipment that can turn a drop of water into a zoo.
Next is a post about the chironomid midges and their tube-dwelling larvae that inhabit the sand-spring.
Posted by Dana at 2/15/2013