What Happened In The Willows, Part Four

The willows by the roadside were an unplanned stop, but I found much to keep my attention right there.  When I spotted the little green bee covered with oil beetle larvae, I began to search for those larvae (triungulins) on the tips of branches and stems where they might be waiting in ambush for bees.  I wasn't very successful in finding clusters of those waiting larvae, but I did see an amazing variety of insects on the tips of stems.  Here's a compilation of some of what I saw.
The most common insects I saw on stem tips were click beetles. 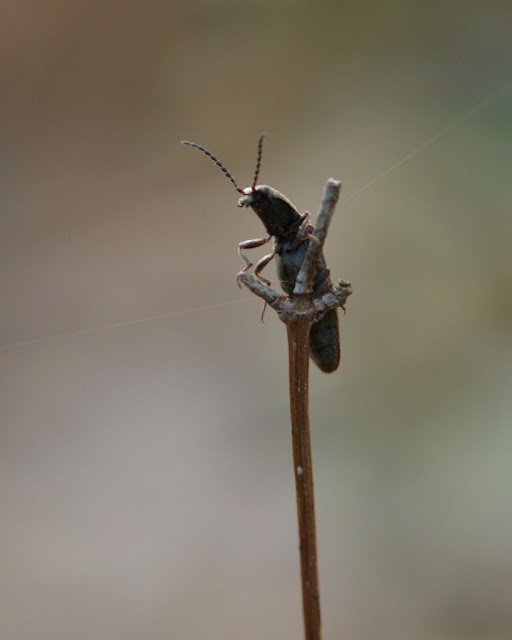 I saw so many just hanging out there that I surmised that these were female click beetles calling males by emitting attracting chemicals.
Here is a photo of another click beetle perched on a leaf tip.  There are a couple of small shiny black beetles off to the side.  I suspect they are some kind of leaf beetle. 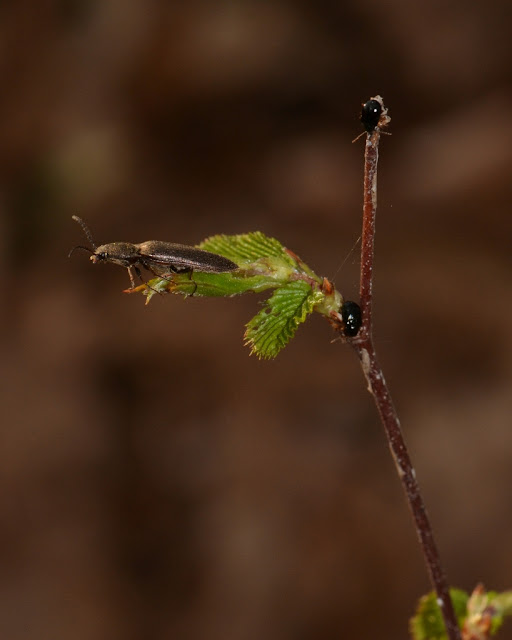 Here's another photo of a leaf beetle (Paria sp). 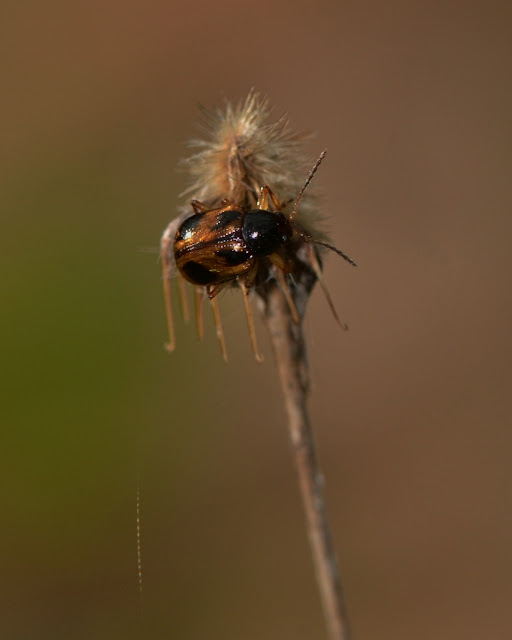 Oh, who would expect to find a sleeping bee in the late afternoon?  While many bees were busy visiting Spring Beauties and Bluebells, this Cuckoo Bee was hanging on the tip of a stem by its jaws... sleeping. 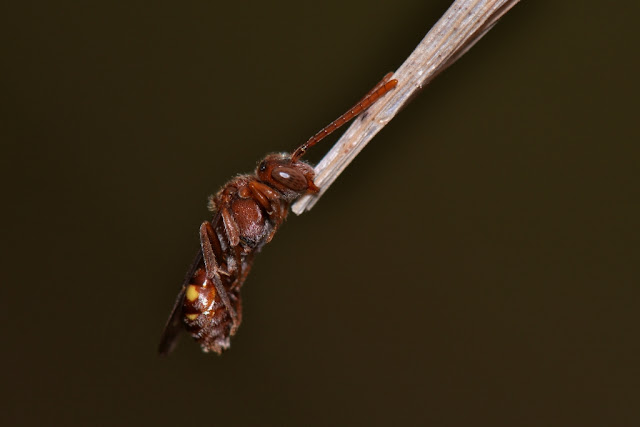 See another post where I have more photos of a Cuckoo Bee hanging by its jaws in this unusual sleeping posture.
Here is an assassin bug nymph feeding on its prey.  Was the fly "sleeping" on the tip of the leaves when it was ambushed or did it land too close to the nymph?  Perhaps the nymph was well camouflaged on the buds when the fly happened by. 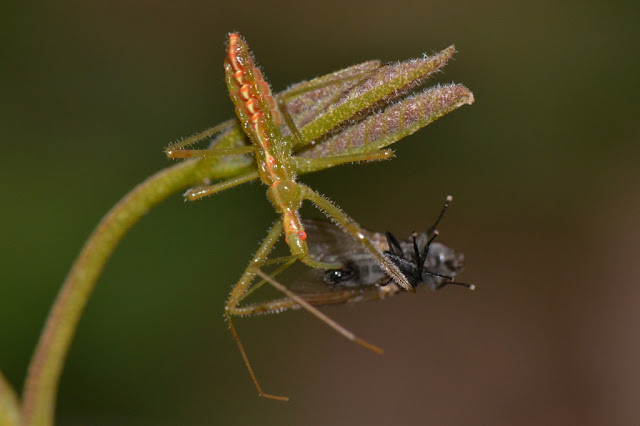 This damselfly was well hidden as it rested on some unfurling buds. 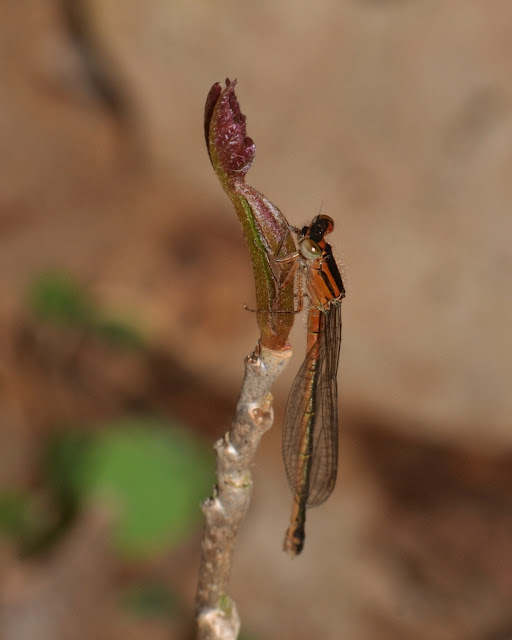 As you can see, I saw all kinds of "stuff" while looking for those elusive oil beetle larvae.  I'm not done yet!
Look at this incredible sight... A male Dance Fly clinging to a branch with two legs. With the rest of his legs he's hanging onto his mate and her nupital gift.  All the while he's using his head as a prop. 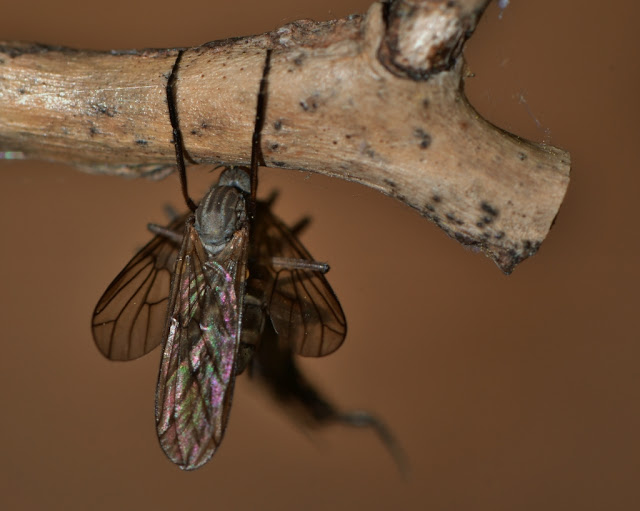 Ouch!  You would think he has a headache. Or at the least, he might be damaging some of his navigational equipment. 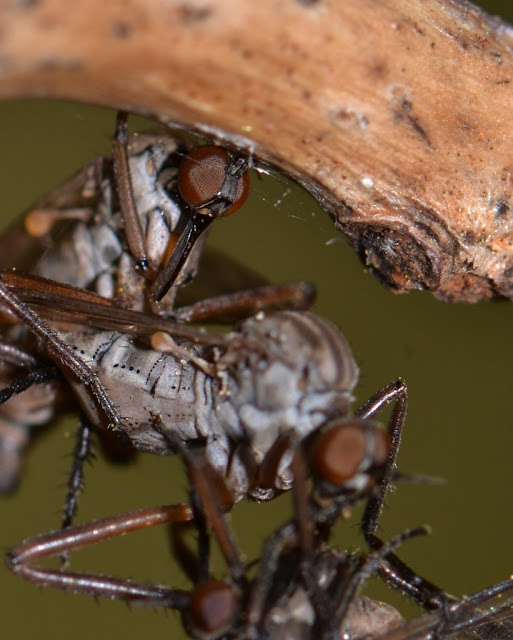 Notice that the prey the female is feeding on is another dance fly.  The male dance fly would have caught this unfortunate dance fly and presented it to the female as a nupital gift. 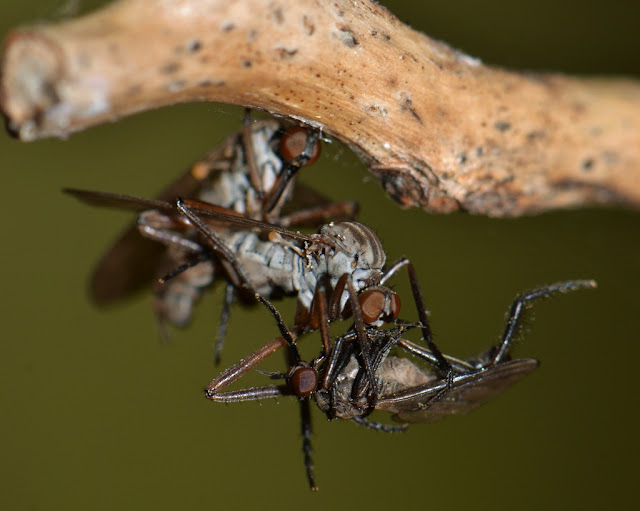 She seems pleased with the gift.

Reminds me of another gift.... if you call writing a masterpiece a gift. 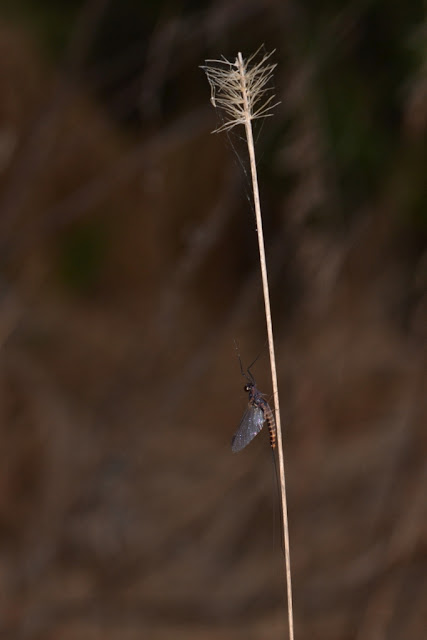 Whenever I see a Mayfly, I think of Benjamin Franklin's "Soliloquy of an Ephemera".
Basically, in a letter to a French Lady, Ben wrote of overhearing the conversation of some Mayflies.  He says, "... I turned my head from them to an old grey headed one, who was single on another leaf, and talking to himself. Being amused with his soliloquy, I put it down in writing....".
That soliloquy ("overheard" by Ben) is a brilliant piece of writing about Ephemera. 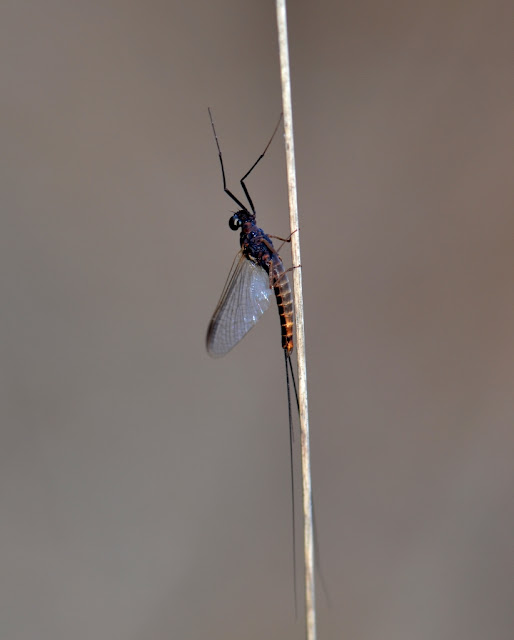 Mayflies... an ephemeral marvel of May.