What Happened In The Willows, Part Three

I encountered a variety of insects during my visit to a small patch of willow shoots on the roadside.  I have already shared pictures of the little green bee covered with Oil Beetle larvae that I saw in the willows.  I also mentioned that the willow patch would keep me busy for a while...
Well, this post is a sampling of what I saw in the willows. 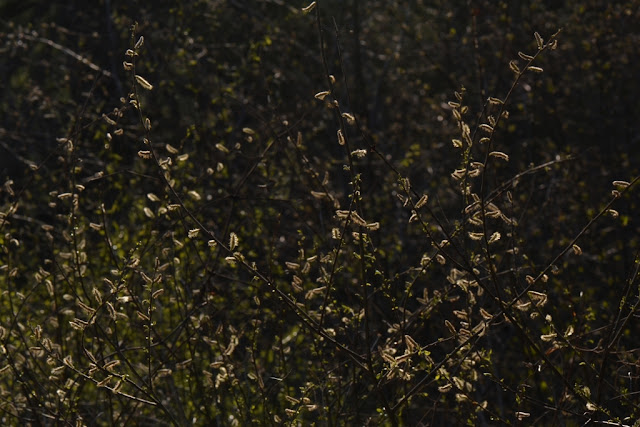 It seemed like there were Willow Leaf Beetles on almost every branch. 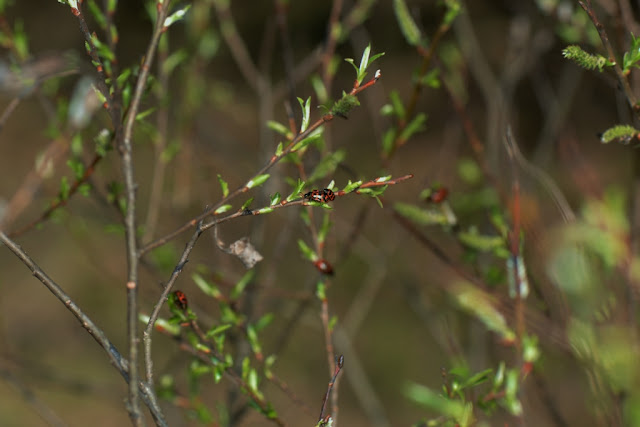 Here is a photo of a Willow Leaf Beetle.  These red-and-black beetles look very similar to Ladybugs. 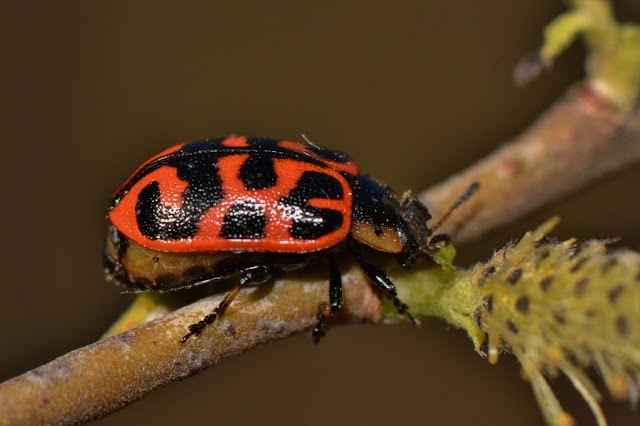 This Willow Leaf Beetle is about bursting with eggs.
There were numerous egg masses on the willow leaves. 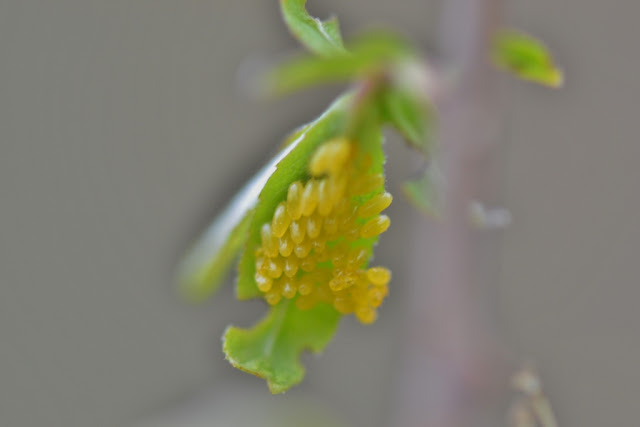 If you could have seen all the beetles and egg masses, you would know why I expect to soon see Willow Leaf Beetle larvae defoliating this patch of willows.
Yes, there were lot of predators on the willows as well.  Here is a photo of a stinkbug feeding on one of the Willow Leaf Beetles. 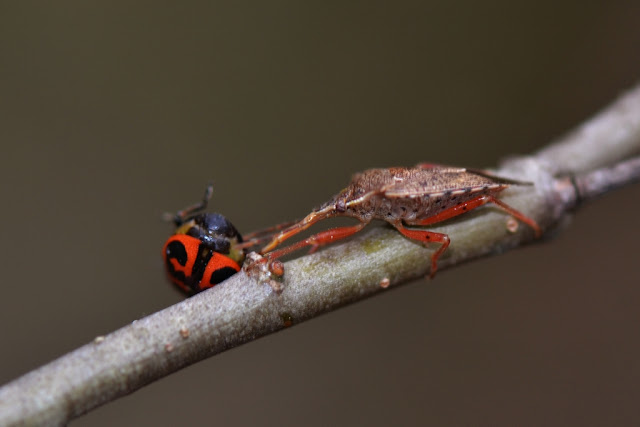 Once I thought I was going to get to see a stinkbug capture one of these beetles, but somehow the "tables turned" and the beetle ended up chasing the stinkbug down the branch.

Another attraction to the Willows was the catkins.  I took a few photos of the willow catkins' visitors.
Here is a nectar-feeding fly. 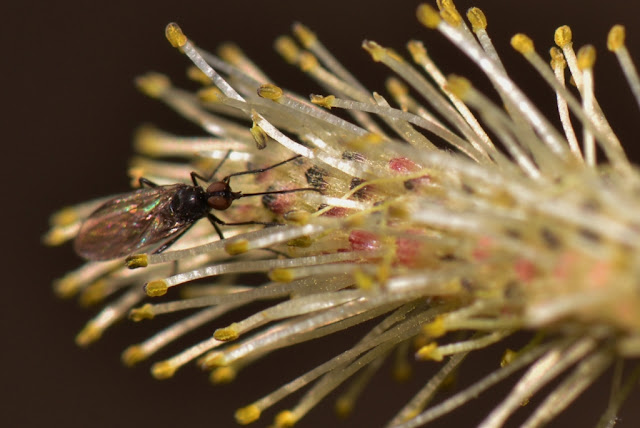 Here is a photo of a miner bee busy collecting pollen and perhaps nectar. 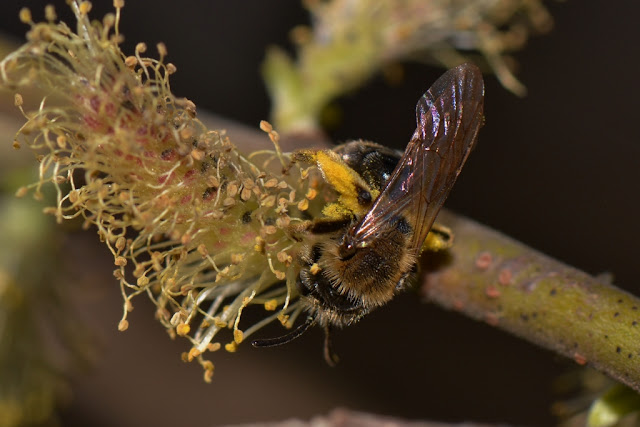 Another visitor was this Cuckoo Bee.  I reckon this was a pitt-stop so the Cuckoo Bee could refuel before cruising along the nearby roadbanks in its search for miner bee nests (and other bee nests) to parasitize. 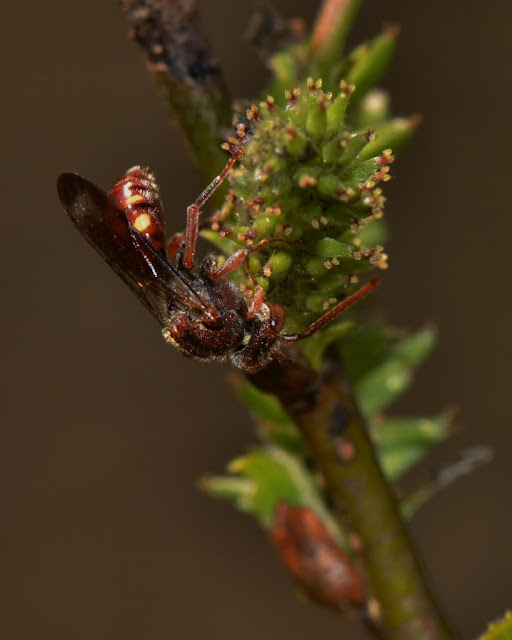 Perhaps you remember my post with photos of a sleeping Cuckoo Bee?

Flitting among the willows were several blue-eyed micromoths.
One particular moth was holding its spiky leg aloft in an unusual way.  This is one of the Bristle-legged Moths, Schreckensteiniidae... great family name, eh? 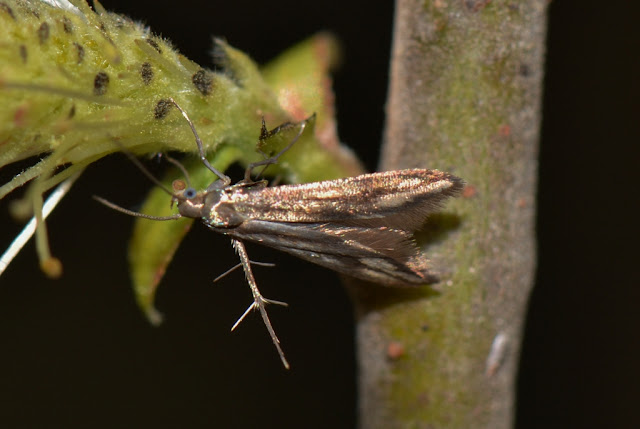 BTW, I love those feathery fringes on the moth's wings.

Here is a photo of a tufted micromoth.  This blue-eyed little moth was also taking a pitt-stop... perhaps because it was raining... and of course the willow's catkins provided some refreshment.  I believe this is a White Pine Cone Borer Moth. 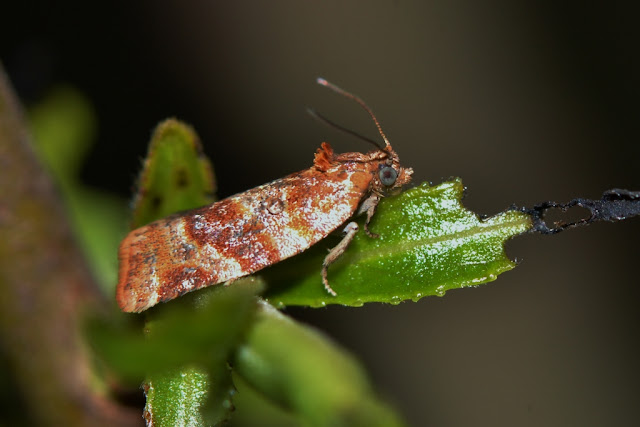 Do you see why my patch of roadside willows will keep me busy for awhile?
- there's nearby white pine trees to watch for pine cone borer damage.
- there's nearby miner bee nest to look for.
- there's soon going to be lots of Willow Leaf Beetle larvae to point my macro lens at.
- ETC