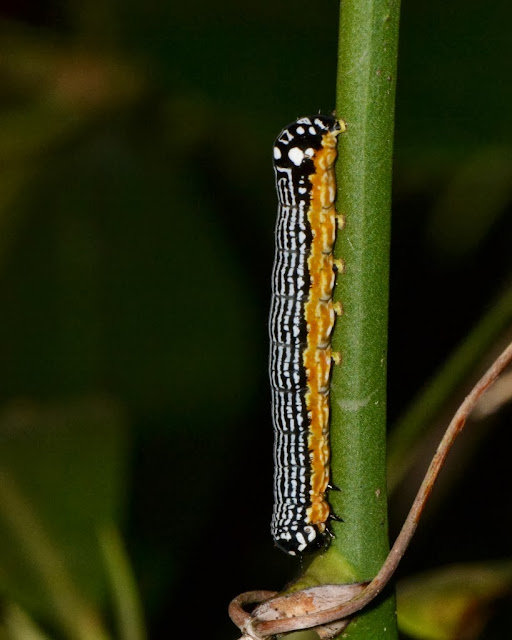 A head on each end... I wonder if bird's brains can figure out which end is up?  I suspect a fake head could give the caterpillar a fighting chance should a bird choose to peck its hinder end instead of its head.  I wish now that I would have acted bird-brained and "pinched" the wrong end just to see if this caterpillar was chemically defended in some way.  As smartly colored and brightly patterned as the caterpillar is, I suspect it is chemically defended and therefore distasteful to birds.  It follows that they have little need to hide... perhaps that is why I spotted the caterpillars as I was walking trail.
The photo below shows another Turbulent Phosphila caterpillar that was feeding on a leaf elsewhere on the same Greenbrier vine. 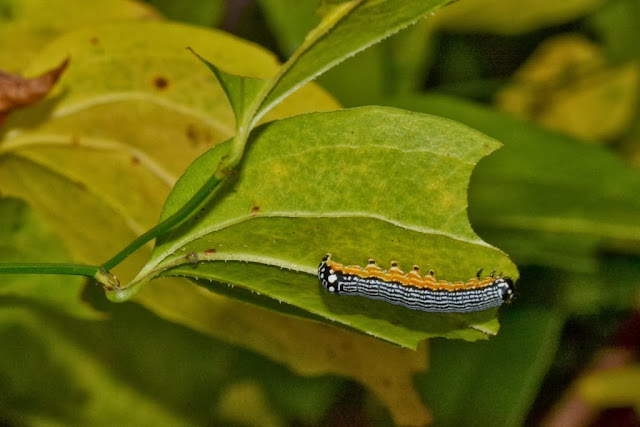 I encountered these black-and-white striped caterpillars back in October.  Now, in late November with winter fast approaching, what are these caterpillars doing?  Well, in the leaf-litter on the ground nearby a Greenbrier vine you might find a withered, lumpy, folded-over leaf that feels a bit heavy for a dried leaf... 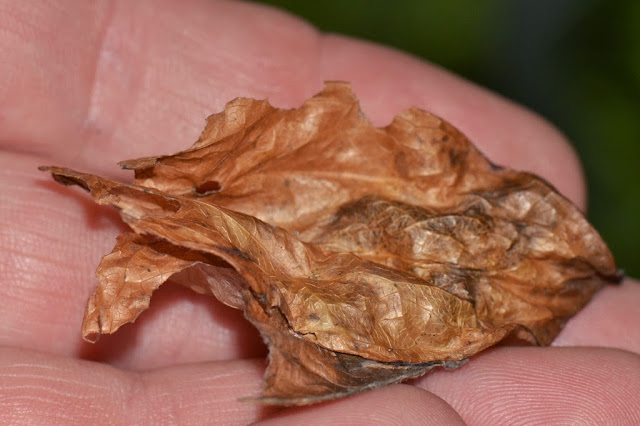 In the photo below, you can see I pulled the leaf slightly apart to reveal a pupating Turbulent Phosphila.  Within the enclosing leaf the pupa was encircled with a ring of silk and "junk" which formed a "cell" or partial cocoon. 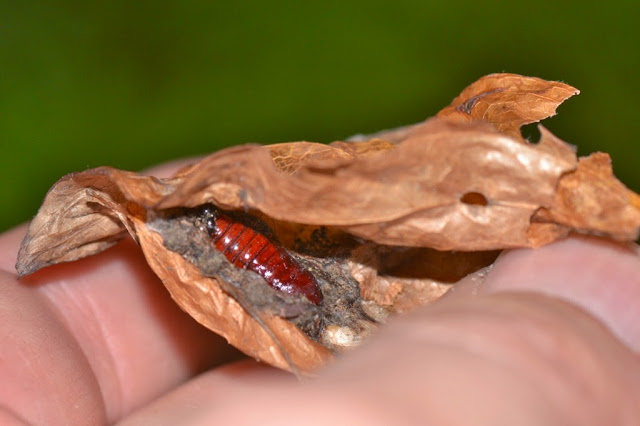 Barring unfavorable environmental conditions, predators, or parasites, that pupa should turn into a rather nondescript, camouflaged, grayish-brown moth come spring.  I think I have a photo of one of these moths that I had taken last spring but can't seem to find it... too plain-looking, eh?

On the same Greenbrier vine as these caterpillars I also noticed a little pile of trash that was moving... there was a tiny trash collector sidling along the vine.  Can you tell that I, like always, didn't get very far on my nature walk?  Oh well, that little creature will make the subject matter of my next post and so we will continue this nature walk/field trip on a vine with tiny camouflaged trash collectors hiding out nearby where flashy, pinstripe-wearing "two-headed" Turbulent Phosphila caterpillars are feeding contentedly.