Photographs Of The Life of a Pitch Nodule Maker

Four months ago, on a cold January day, I turned aside from the trail to see if there was anything interesting in some Scotch Pine trees.... Of course there was!  There were some lumps of pitch (pitch nodules or pitch blisters) on those Scotch Pine branches.  I pried open a pitch mass and there was a Pitch Twig Moth larva looking very alive and well.  Right then and there I decided to see if I could rear some larvae to adulthood so I could photograph the whole story of the pitch nodules.
Here is a photo of a Pitch Twig Moth, or Pitch Nodule Moth (Retinia sp.), which I reared from one of those lumps of pitch. 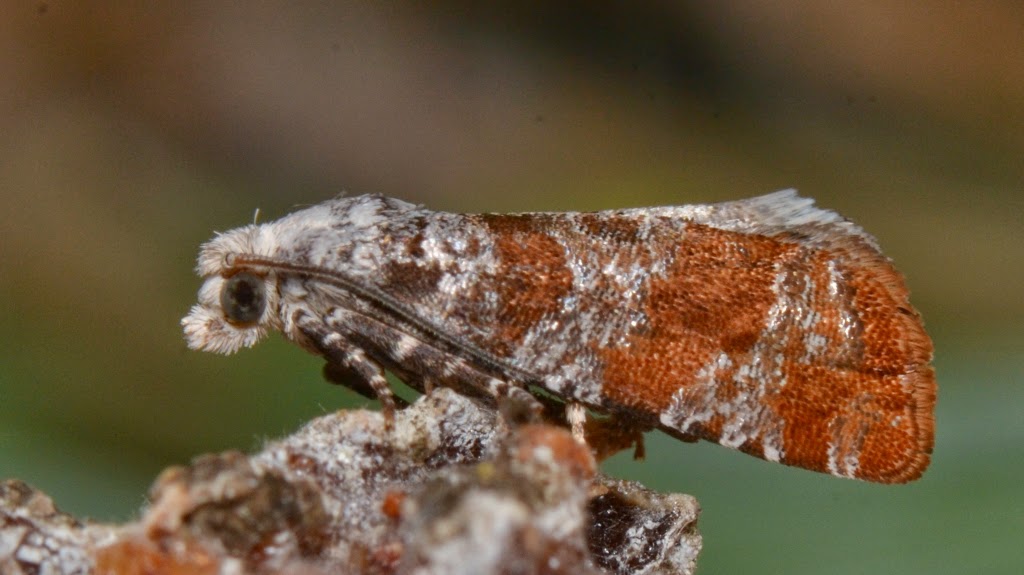 Now for the story of the life of a pitch nodule maker. 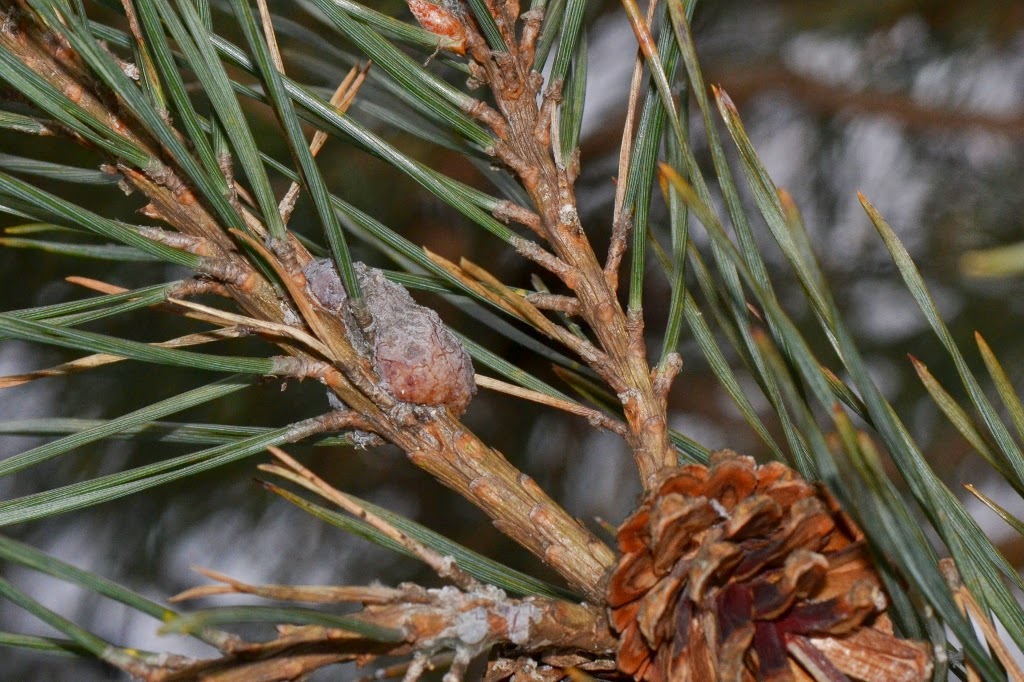 When the pitch nodule moth larvae were young, they tunneled into twigs on the Scotch Pine.  The caterpillars managed to keep the pine's pitch flowing and used it to form the masses of pitch over their tunnels.  The Pitch Twig Moth larvae fed on the interior of the twigs, and it would seem to me, some of the resin.
It would seem that living hidden in this resinous mass affords the larvae some protection from predators. 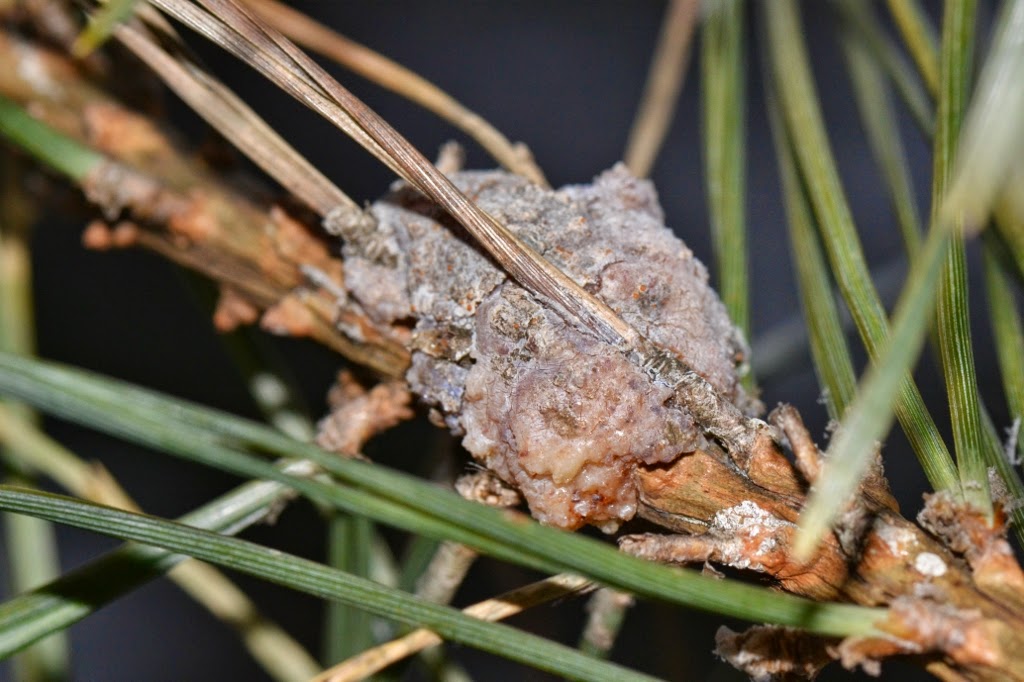 The moths have a two year life cycle and that is evident in the photo below... the older pitch has a darker look and notice that the twig is swollen, or deformed, opposite (under) the pitch blister. 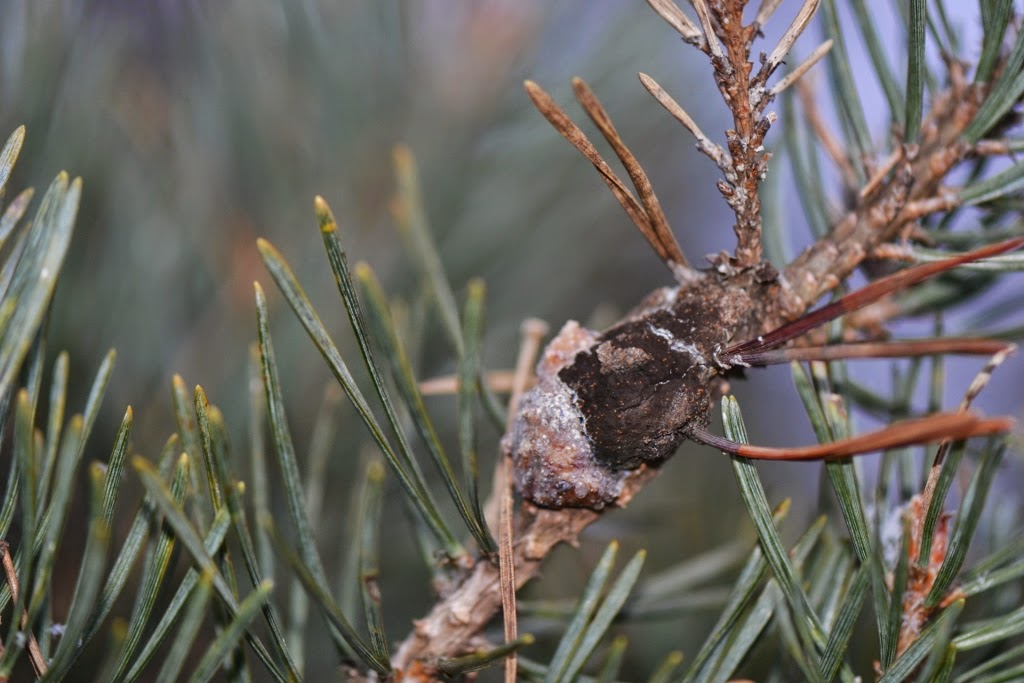 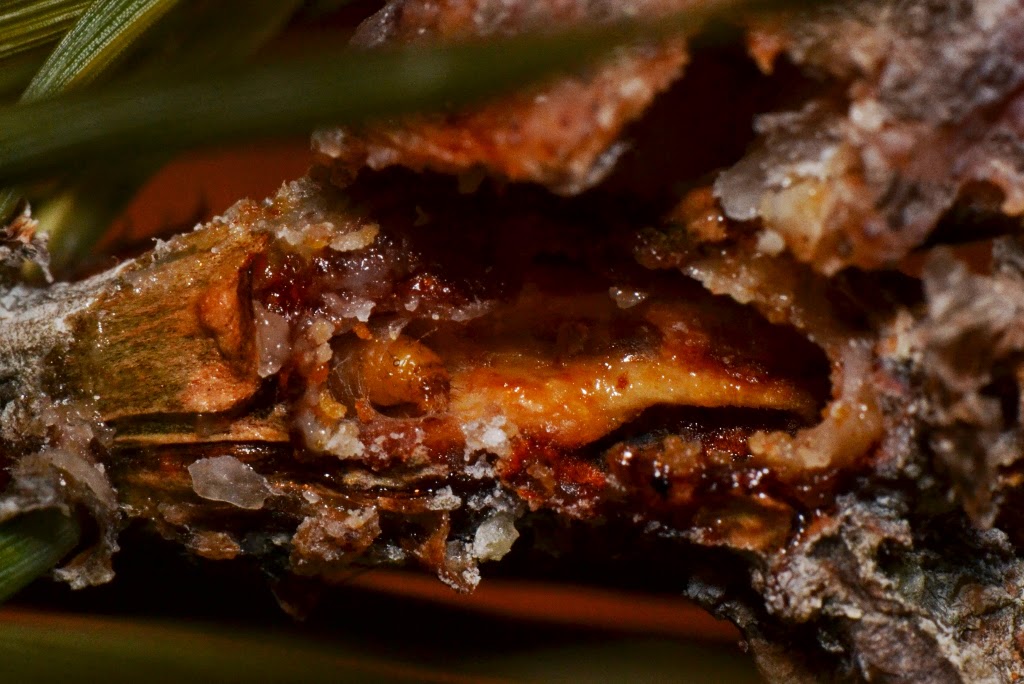 Yes, I can imagine you can almost smell the pine pitch.  I imagine it's a sticky situation inside that pitch blister.  Notice how the channel it excavated in the twig is covered with pitch. 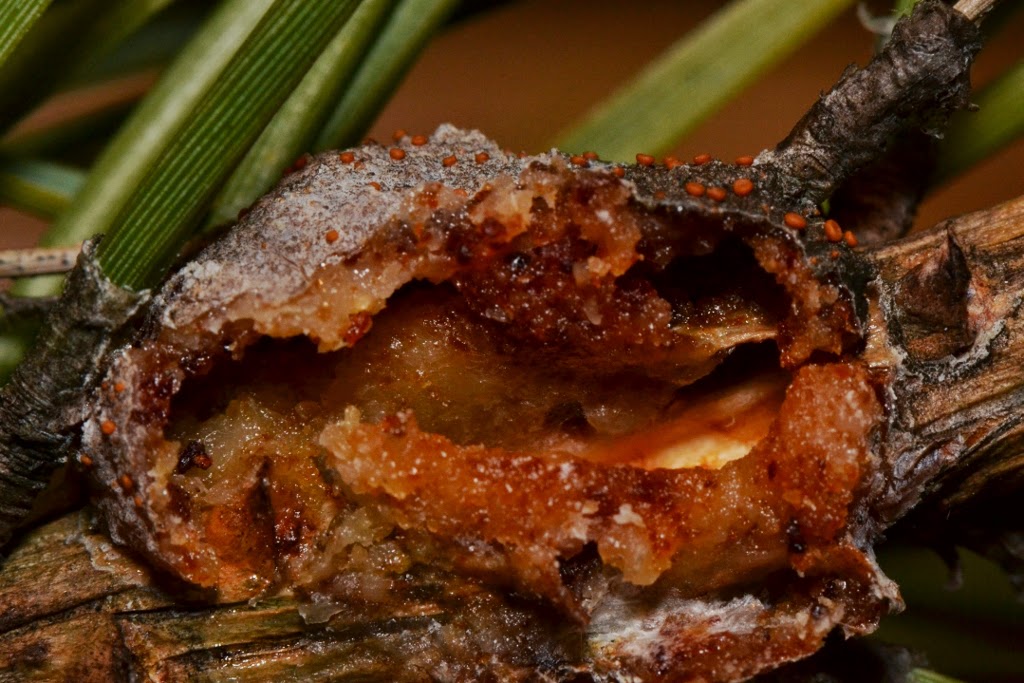 The inside of the pitch nodule is made up of minute balls of pitch and frass. 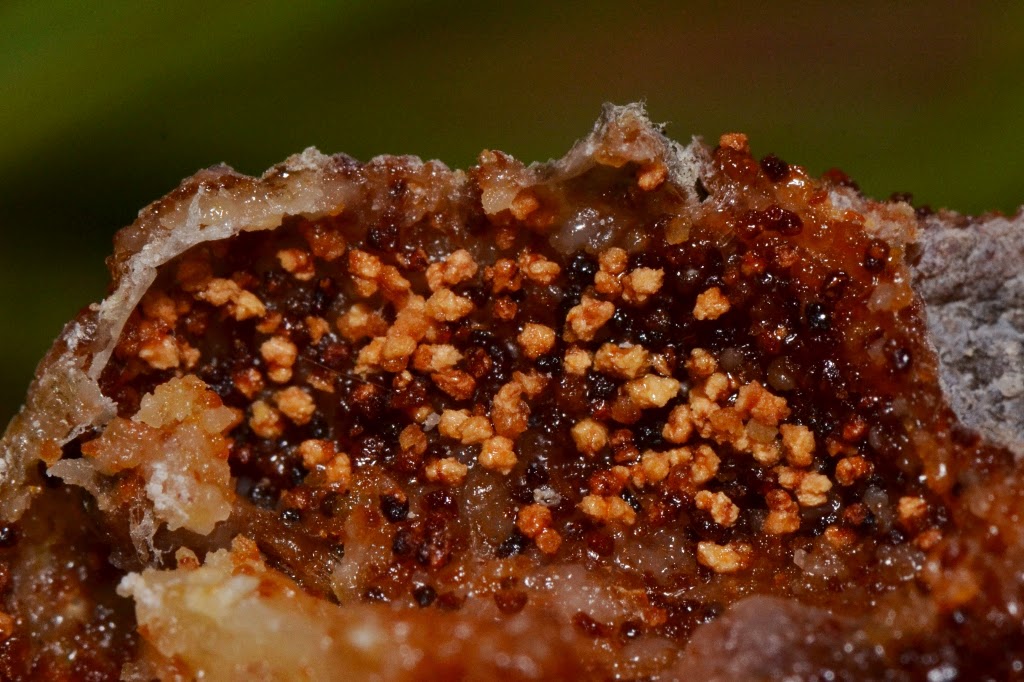 I found that the larvae had begun to pupate around mid May. 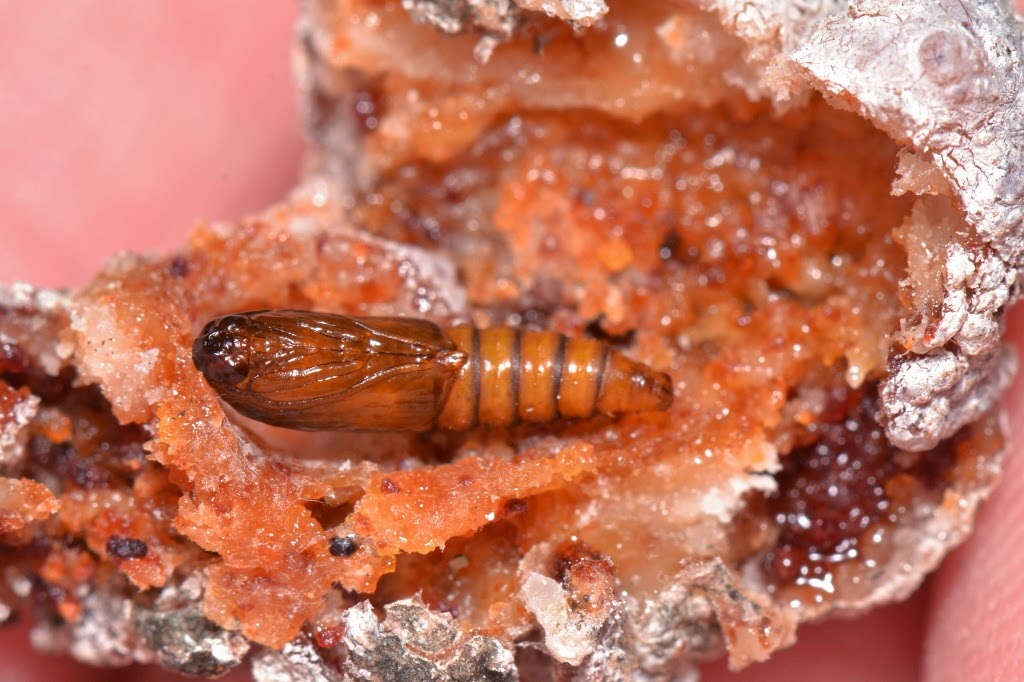 About a day or so before the moths emerged from their pupae, each pupa wiggled completely out of the pitch mass and dropped to the ground.  At least that's what they did in my rearing containers. Perhaps in the wild they wiggle out only part way before the moth emerges.  Anyway, a couple of weeks after pupating the adult moths emerged from the pitch blisters.
Here is a photo of a Pitch Twig Moth at home on the tip of a pine needle. 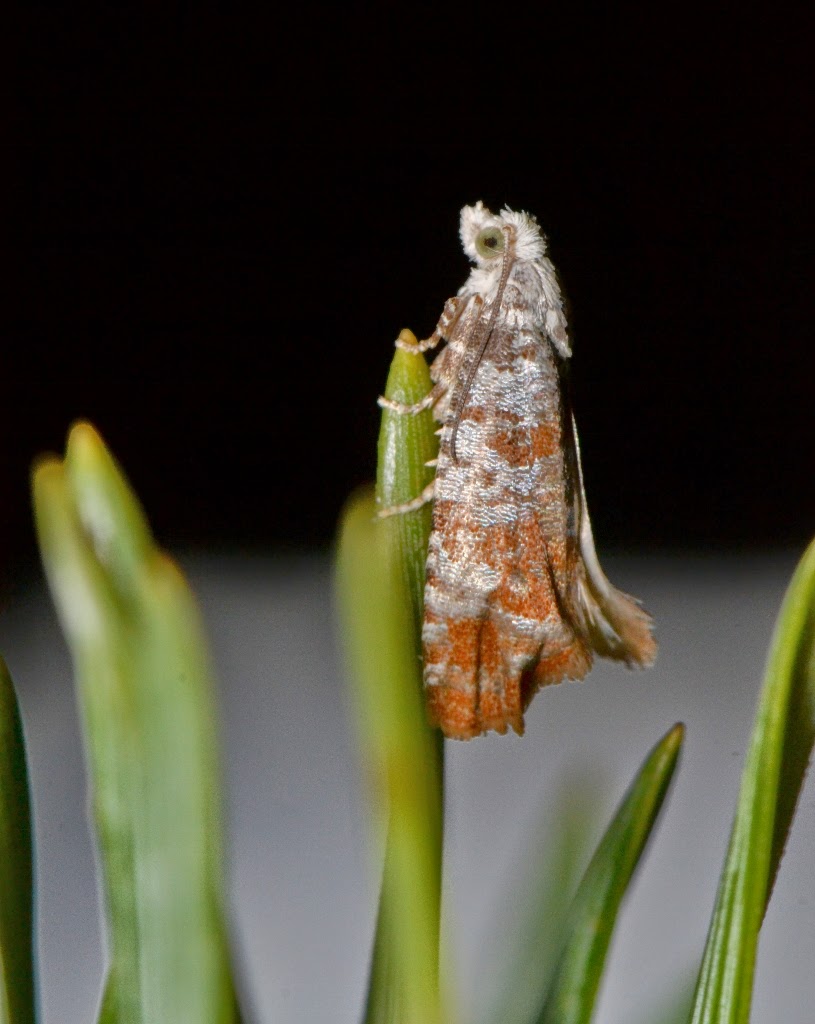 Soooo, there you have it.... the story of the pitch nodules I found when I turned aside from the trail on a cold January day. 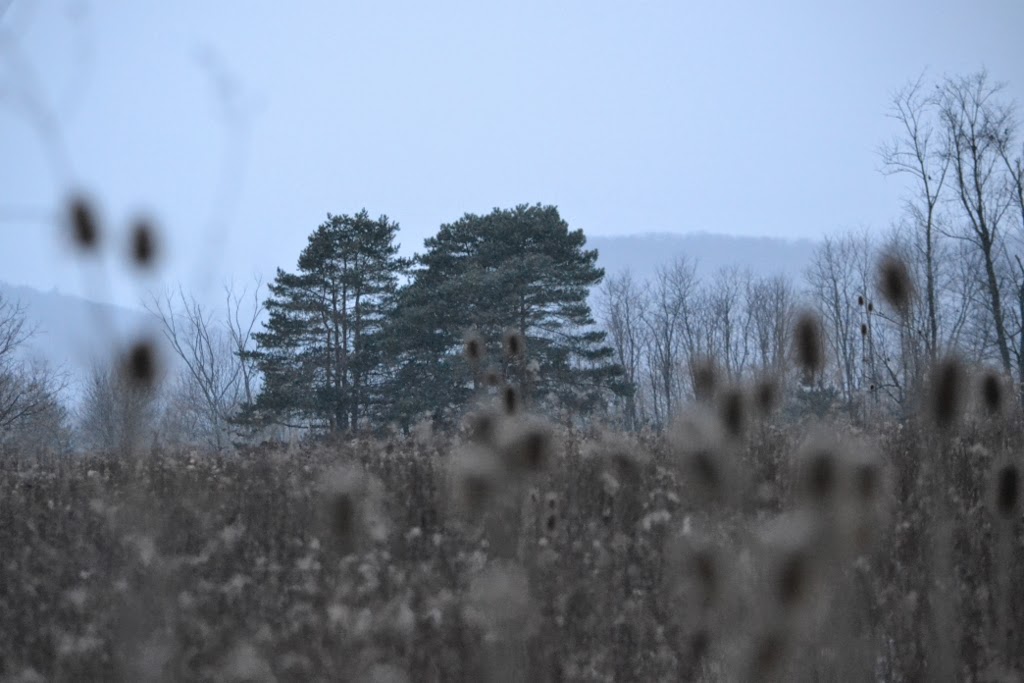 Actually, there might be a bit more to the story.  I noticed some small orange things on the surface of some of the pitch nodules.  Right then and there I decided to see if I could figure out what they are. My first thought is that those look like fruiting bodies of a fungus that grows in the pitch. 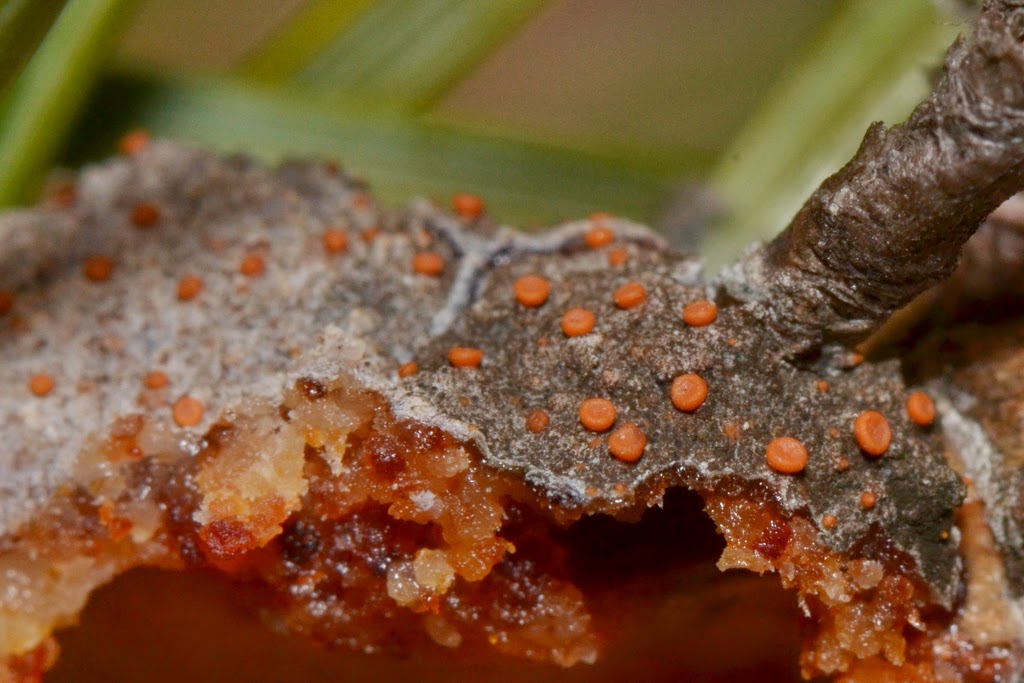 How about that?  Could it be, that, if there is fungal growth in the pitch, that it is a symbiotic fungus or is it simply incidental?  Whatever those orange things are, I would like to find out.
It seems there is always more to the story than meets the eye....
Posted by Dana at 6/06/2014