This virtual curio cabinet is...
... a showcase of some of nature's curiosities.
... a sampling of the best of Nature Posts.
... a spattering of Dana's Favorites. 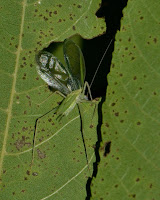 The Narrow-winged Tree Cricket sings through a hole in a leaf.
That is truly something amazing to behold! 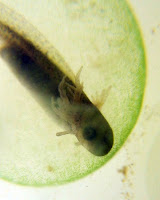 The marvel of solar-powered salamander eggs
is explored in this six-part series starting with a bog walk. 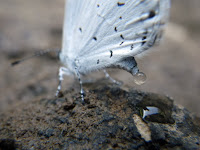 Azure Butterflies puddling by the river are sucking up moisture from the soil and peeing faster than it soaks away. 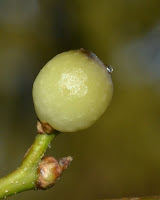 Pip galls in our Pin Oak drip honeydew and pique my interest.
Those honeydew droplets are produced to befriend yellowjackets and ants.  This adds a measure of protection for the tiny, hidden wasp larvae.
The larvae are manipulating the oak tree and causing it to do some incredible things!

This bog orchid, the Grass-pink Orchid, tricks bees by attracting them with fake pollen, then rewarding the unsuspecting bees by flopping them on their backs. 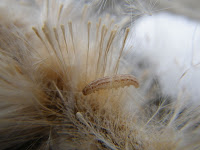 A  Cattail Moth Caterpillar crawls around on a cold January day after I split open its fluffy, cattail seed-spike home.

Firefly signals caught on a camera instead of in a jar. 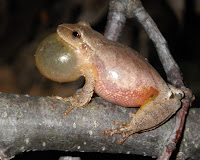 Spring awakens my vernal pool and its inhabitants. 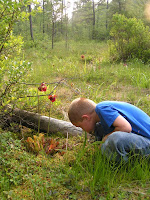 We love bog plants, like the carnivorous Purple Pitcher Plant, the Rose Pogonia Orchid with its bee trickery, and sphagnum moss' spore canons. 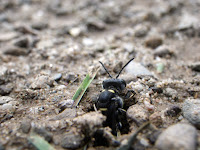 This solitary wasp digs a hole in the ground for a nest which it provisions with metallic wood borer beetles.  I show a cross-section of its burrow complete with a wasp larva. 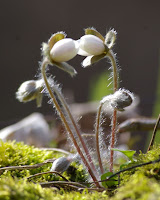 Round-lobed Hepatica is the Beauty of Spring in this two-part series. 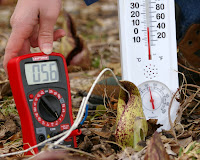 When a leaf falls into a stream....
... a remarkable leaf-processing system goes to work. 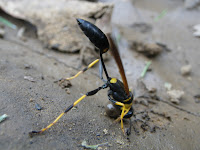 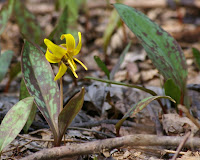 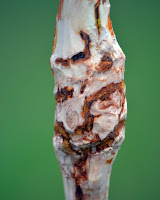 I wrote about  Alder galls and other interesting facts about alder bushes in this series.

We examined the contents of owl pellets.  Our Screech Owl
pellets contained some jaws of Red-toothed Shrews.

We consider the catch-nets of net-spinning caddisfly larvae... under the water at the edge of a waterfall.

We are sidetracked by Yellow-eyed Grass while on a ramble through the riparian habitat along the river. 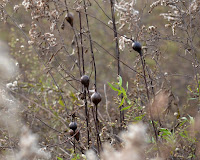 The goldenrod patch is a goldmine for the nature lover.  In this post I looked at a few kinds of goldenrod galls.

You are likely to have this remarkable, rain-drop powered, spore-dispersal system (of the Bird's-Nest Fungus) operating in your backyard. 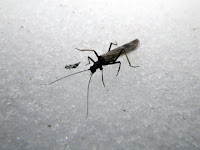 Winter Stoneflies and Snow Midges walk around on the snow-covered riverbank.